Popular culture may be getting more diverse in terms of gender and skin color, but it's still mostly flat in presenting diverse human qualities and differences. Few characters play against type, which makes the exceptions all the more remarkable. Part of the power of characters playing against type is simply their insistence, humorous and without qualified explanation, of their existence. In other words, like most of comedy, its power is better experienced, not explained 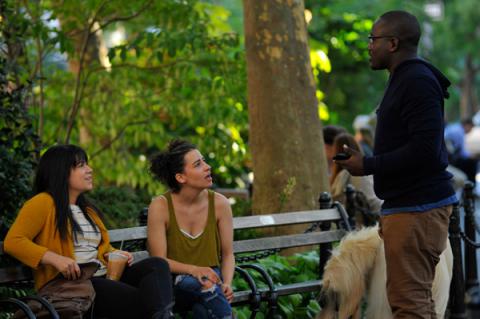 Before Eddie Huang's Fresh Off the Boat-a memoir about growing up with Taiwanese immigrant parents in suburbia-debuted on ABC in early February, it had been twenty years since Margaret Cho's All American Girl, America's first and last sitcom centered on an Asian family. Huang has recently written about how network television, "the one-size fits-all antithesis" to his memoir, "neutered" his father, "exoticized" his mother, and altogether reduced his story to a weak stereotype. Still, is its existence better than nothing?

Network sitcoms on network TV face a set of regulatory tests and limiting aspirations to reach a "universal" (read: white) audience that perhaps premium channel shows do not. Huang laments that this universal demographic, in the sense that it even exists, "watches cornstarch television and eats at Panda Express" only "because that's all they're being offered."

Emily Nussbaum writes that while Fresh Off the Boat is "unlikely to dismantle the master's house" it still "opens a door"-that "simply watching people of color having a private conversation, one that's not primarily about white people, is a huge deal." That premise is a big deal (and the break of a two-decade-long hiatus is too; just seeing the family is powerful). But Fresh Off the Boat can't be expected to stand for the experience of every Asian in a thickly diverse Asian America, and in trying to appeal to such "universals," it blows its chance to tell the specific story of a specific boy coming from a specifically-told experience.

This matter of representation and multiplicity was one among many central to the last few years' debate around the show Girls. The issue exposed by Girls is not, primarily, that the perspective of characters of color (if not a person of color at all, in the first season) is missing-it's that, just as we don't have a spectrum of references for different kinds of Asian characters on TV, we don't see more shows about different kinds of girls, of a variety of different backgrounds, skin colors, sizes and experiences.

We expect that a show called Girls will speak to the experience of All Girls-an unrealistic and beside-the-point expectation. This doesn't mean the show should be shielded from criticism. But the valid outrage around the cast's lack of melanin, especially in a show that's considered to be cutting-edge and progressive about other things, points to much larger issues, i.e. (beyond the wider paucity of characters of color on TV in general) the remaining reality of social segregation, even in New York City, even among people who consider themselves progressive.

Simply adding token characters of color to Girls, though, would not be enough. Inherent in Donald Glover's (a.k.a. Childish Gambino's) character, Sandy, a black Republican who appeared in two episodes of the second season as Hannah Horvath's (Lena Dunham) love interest, was the notion of "playing against type": in opposition to the audience's expectations. Though many saw it-for better or worse-as an answer to first season criticism, Sandy briefly brought particular and humorous nuance to the show. In their breakup scene, Hannah attempts, with amusing tone-deafness, to convince Sandy that his political beliefs are wrong with a statistic about the number of black men on death row. This sort of reversal-here, a side-eye at self-consciously white liberal anti-racism-can get more and more ridiculous, and deliver more complex social commentary, the more layers it goes. Too bad Sandy was gone so soon.

Comedy can offer the most effective site for identity subversion, whereby we laugh at the obvious unmaking of our culture's stereotypes-and more and more frequently, TV characters are playing against type to accomplish this. (Not that this is exclusive to straight comedy: Empire is another great example, in which characters that may appear as types on paper are then complicated.)

"Ilana, what are we doing?" Lincoln asks in the first episode of Broad City (now in its second season on Comedy Central). "Are we just having sex? Hooking up? Are we dating, what is this?"

"This is.purely physical," Ilana answers, like finding the words was almost, then not at all, an issue. She nods as if to soften the blow, knowing she's dealing with a sensitive soul.

"Why does this always happen to me?" Lincoln wonders aloud in his introspective dentist's voice.

Lincoln's line lands because we don't expect him to say it. As Amy Poehler, the show's executive producer, said, Lincoln is "playing, in so many different ways, against type." A woman is the one who craves the intimacy of a relationship while a man, of course, is categorically interested in sex over emotion or romance. Not to mention a black man who, as we know from mainstream entertainment, is more likely to be a criminal or hustler, entertainer or athlete-typically hyper-masculine and aggressive-than a soft-spoken dentist who wants more commitment from a friends-with-benefits situation. And yet somewhere, we can be sure, this loveable black dentist longing for more does exist. We've just never seen him on TV before.

Lincoln is not the only character on the show who reverses our cultural notions that equate certain identities with specific modes of behavior and experience-Abbi and Ilana, the two main characters, in some ways play against type too. Young white women have a much more varied history on TV than many types-and yet, though Sex and the City felt groundbreaking when it debuted, with its explicit sex talk and single women, today (and probably then too) it and many of its precursors are seen as somewhere between lacking and problematic.

The main characters of the more recent The Mindy Project and the wildly popular Scandal (neither of which I've seen) are played by women of color (respectively, Mindy Kaling and Kerry Washington-the first black female lead in a network drama in almost 40 years) for whom identity is simply a fact. It is not ignored, but it also is not central to the plotline-a kind of Bechdel test for people of color.

Similarly, when asked about the clearly for-us-by-us nature of their Broad City characters, the show's creators-also named Abbi Jacobson and Ilana Glazer-answer, coolly, that they simply write their characters to talk to each other as they do in real life. Part of the power of characters playing against type is simply their insistence, humorous and without qualified explanation, of their existence-quite the opposite from the analysis of a piece like this; in other words, like most of comedy, its power is better experienced, not explained.

Broad City is a platonic "romance between two friends" who happen to be women, Ilana says. We get to see women who care about each other as much (if not clearly more) than they do about any man; who have fun in ways we don't often see women having fun on TV; and who are unique and amusing human beings. Abbi and Ilana are not Everywoman and shouldn't be expected to be-they just demonstrate the possibilities for representations of many different kinds of women.

A more complex comic reversal of expectations appears in perhaps the most famous Key and Peele sketch-"Obama Loses His Shit"-which Zadie Smith describes in her recent New Yorker profile of the Comedy Central show. In it, Peele, as Obama, gives a "weekly address" while Key, as Luther, Obama's Anger Translator, fumes (in a vernacular that might be understood as "more black" than Obama's own-deliberately amped up): "please test me and see what happens" to Kim Jong-un and Mahmoud Ahmadinejad; to the birthers, "I have a hot-diggidy-daggidy mama-se, mama-sa, mama-kusa birth certificate you dumb ass crackers!"

In this instance of reversal, Luther is expressive of what Obama clearly (and purposefully) is not-though, Smith makes the point, what many of us at times long for: an anti-nonpartisan, clearly not moderate, culturally black answer to the racist bullshit of the world.  The scene suggests that Obama's public persona is a version of playing against type-against, that is, widely held cultural stereotypes about black men, their capabilities and destinies. Key and Peele seem most interested in comic reversal that exposes many of our complex beliefs, rituals and desires around both the constructed idea and lived realities of "race": Obama is not Luther both because he isn't and because he can't be; as a black man, he is both expected to be, and therefore also on constant defense against, this Angry Black Man stereotype. A pertinent question when considering reversal, Peele explains, is "What's the mythology that is funny just because people know it's not true?" With respect to type, however, we can be deeply invested in our mythologies.

In Smith's piece, she describes the two biracial actors' talent, necessitated by growing up both too-black and not-black-enough, for code-switching: "`When we're around other brothers and sisters,' Peele says, with a sly smile, `you gotta dial it up.' This leads to a demonstration of blackness dialed up,"-meaning, a slew of "no doubt"s, and physical gestures which, Smith writes, "aren't the familiar, supposedly `black' gestures of TV comedy (no gang signs or exaggerated side-to-side head bopping) but are still, of course, stereotypical." The performance is more nuanced, hitting that sweet spot where convention meets critique meets celebration, to complicate how we understand what "being black" can mean. "To say that the two men become, in that moment, `more black,'" writes Smith, "is to concede, in one sense, to a racial stereotype-and yet if there is not such a thing as `blackness,' upon what does `being black' hinge?"

The premise behind ABC's Black-ish, which premiered last fall, sharply echoes Smith's question: "upon what does `being black' hinge?" (if at times beholden, as a sitcom, to laugh-track-esque conventions)-in which an Advertising Executive father navigates his anxiety around the potential diminishing blackness of his upper-middle-class suburban family (his eldest son wanting to play field hockey, not basketball), while multigenerational takes on race within the family (his youngest knowing Obama as the only President) shake up any rigid conception of identity or authenticity. Even as blackness is exposed as contingent and generational, however, as the credits run each week there's no championing of a "post-black" or "post-racial" conclusion. The show's humor instead honors that real sense of community Smith describes just before wondering on what "being black" might hinge: "It concerns the communality of race, about which we are rarely allowed to laugh." Being black is not nature, Black-ish tells us, but it's not nothing either.

There's an unprecedented level of diversity on television today. But diversity doesn't guarantee complex, varied characters that defy type. As more and more characters on TV are playing against the limits of how their type has historically been portrayed, mere representation is no longer enough-not that it ever was. Only when enough varied and complex characters are regularly on TV will this specific conception of playing against type rightly seem nonsensical.

[Lucy McKeon's work has appeared in The Paris Review, The Nation, Guernica, and Salon. To read more visit lucymckeon.com ]