Last week, Our Declaration, by Danielle Allen, made PEN/America Center's shortlist for the Galbraith Award for Nonfiction. The prize goes to "an author of a distinguished book of general nonfiction" "notable literary merit and critical perspective" that highlights "important contemporary issues." Allen's book was published last year to a host of lively reviews. Here is one of the earliest, by Steven B. Smith. Also included below is a link to Allen's homepage. 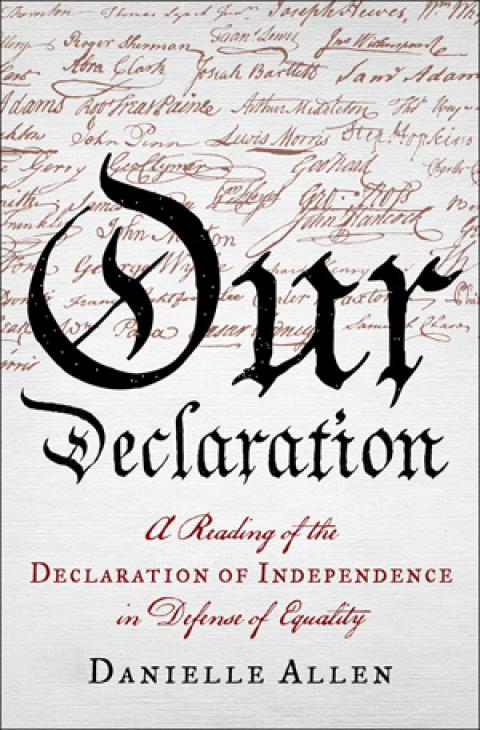 A Reading of the Declaration of Independence in Defense of Equality

“I have never had a feeling politically,” Abraham Lincoln declared in Philadelphia on his way to the White House, “that did not spring from the sentiments embodied in the Declaration of Independence.” This statement cut to the core of Lincoln’s deepest reflections on politics and philosophy. The question is, what precisely are the “sentiments” embedded in the Declaration? This is an issue with which some of our best historical minds — Carl Becker, Garry Wills, Pauline Maier — have grappled.

Now Danielle Allen, a professor of social science at the Institute for Advanced Study, has added her voice to the mix. Allen has written a line-by-line, frequently word-by-word, commentary on the Declaration, not excluding the placement of commas and semicolons. The book was occasioned by her experience teaching the Declaration to night school students in Chicago. Just how do you make Jefferson’s sonorous prose speak to today’s students, many of whom are holding down jobs and managing day care? Allen writes movingly about growing up in a mixed-race African-American family whose dinner conversations often turned to the Declaration and its claim that “all men” are created equal.

“Our Declaration” sets forth a bold thesis. American society frequently sees the claims of liberty and equality as pulling in opposite directions; the more you have of one, the less you have of the other. Furthermore, in the battle between liberty and equality, the claims of individual liberty have generally trumped those of equality. Allen says this is a false dilemma. Liberty and equality are not parts of a zero-sum game, but two mutually supportive aspects of a common democratic culture. It seems hardly fortuitous that a book arguing for the centrality of equality should appear at just the moment when we have discovered the effects of inequality in our public life.

Equality, Allen argues, consists of two parts. The first is an assertion about “freedom from domination.” The Declaration’s opening sentence affirms the colonists’ right to a “separate and equal station” among the powers of the earth, suggesting the idea that no nation has the right to interfere with another’s ability to control its collective destiny. In a revealing chapter she shows how this phrase was subsequently undermined by Southern segregationists’ arguments for “separate but equal” arrangements and accommodations. Separate and equal implies mutual respect and reciprocity; separate but equal, hierarchy and domination. To paraphrase the great Dinah Washington, what a difference a word makes!

But equality is about more than noninterference; it is also about the creation of a common democratic culture. This goes far beyond the standard reading of the Declaration as a defense of the right not to be interfered with. The Declaration’s assertion of “certain unalienable rights,” among them life, liberty and the pursuit of happiness, suggests that we are each the best judge of our own interests and consequently equally capable of participating in a shared political life. “Happiness” here does not mean whatever gives us individual pleasure, but contains a social and collective dimension. The core of this idea is equal access to the levers of political power. “As judges of our own happiness, we are equals,” Allen writes. “This gem of an idea is the prize of our quest.”

Continue reading the main storyContinue reading the main storyContinue reading the main story
This book makes three large claims about the Declaration of Independence, one that is profoundly true, another that is debatable, and a third, I would say, that is false. Its principal truth is that when Jefferson wrote “all men are created equal,” this genuinely meant to apply to all, black as well as white. There is a moral cosmopolitanism in the Declaration’s language. This universality was provocatively confirmed by Alexander Stephens, the vice president of the Confederacy. In his “Cornerstone Address” of 1861, Stephens alleged that the Declaration did in fact intend to apply to all races, which is why it was necessary for the Confederacy to break from the Union and create its own republic explicitly based upon the principle of white supremacy. It is one of the delicious ironies of intellectual history that those today who claim Jefferson could not possibly have included African-­Americans in his assertion of human equality are unwittingly repeating the canards of Confederate propaganda.

Second, Allen devotes considerable attention to the famous “Laws of Nature and of Nature’s God” clause. How much does the Declaration depend on a theistic orientation? Jefferson and his colleagues speak of rights as being endowed by our Creator. An endowment suggests that these rights are not self-created but a gift. Yet as Allen correctly notes, the God invoked by the Declaration is certainly not the God of the Bible, and may not even be the God of Christianity. So what work does the reference to the laws of nature perform in the text? Here is where matters get tricky. Allen seems to argue, without exactly saying, that the language of divinity is entirely marginal to the text.

In fact, she says, the Declaration’s language of “self-evident” truths is drawn not from Scripture but from logic. A self-­evident truth is a truth like those found in Euclid, based on language and reason alone. But the question is whether rights claims are like the Pythagorean theorem. Do we understand human equality in the way we can grasp the properties of a triangle? “Can people,” Allen asks, “without believing in a god, achieve for themselves maximally strong commitments to the right of other people?” Without answering her own question, she confidently affirms that one does not need to be a theist to accept the arguments of the Declaration. It is not at all clear that this confidence was shared by the authors of the text.

Allen’s least plausible assertion is her claim about the “group writing” that went into the composition of the Declaration. She notes that the Declaration was a memo drafted by a committee and argues that group writing “heads the ranks of human achievement,” even above works of “individual genius.” Really? Group writing, she says, shows how something called the “collective mind” contributes to the production of our shared moral vocabulary. But this claim must be false even in Allen’s own terms. Jefferson’s original draft of the Declaration contained a powerful denunciation of the slave trade as a “war against human nature.” This passage was deleted by the Continental Congress as too inflammatory to be included in the final version. Jefferson’s relationship to slavery was, as Allen observes, “maddeningly complex,” but had his words not been compromised by the group, they would have rendered impossible later misrepresentations of the Declaration as expressing the economic self-­interest of the slave owners.

Whose Declaration is being described here — Jefferson’s, Allen’s or, as the title suggests, that of our collectivity as a people? Allen’s passion for each of the Declaration‘s 1,337 words is admirable. Yet when she writes that its equality clause stands at the foundation of an “egalitarian cultivation of collective intelligence” and a “co-ownership of a shared world,” her analysis veers away from careful reading into the domain of wishful thinking. It is one thing to restore the Declaration’s equality clause to its pride of place, but quite another to suggest that it advocates the theory of equality applied to the human mind. Allen’s case for a more robustly egalitarian Declaration makes her book timely, but that doesn’t make it true.

Steven B. Smith is the Alfred Cowles professor of political science at Yale and the author, most recently, of “Political Philosophy.”