The Numbers are Staggering: US is `World Leader' in Child Poverty (in "Developed" Countries)

The callousness of America's political and business leaders is shocking. A new report from UNICEF, on the well-being of children in 35 developed nations, turned up some alarming statistics about child poverty. More than one in five American children fall below a relative poverty line. The United States ranks 34th of the 35 countries surveyed, above only Romania and below virtually all of Europe plus Canada, Australia, New Zealand and Japan. (The Washington Post) 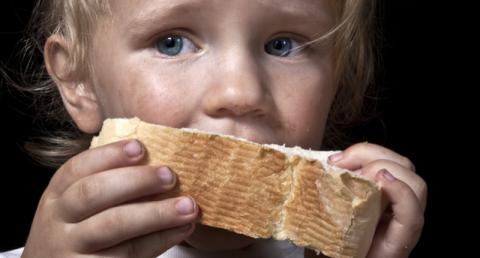 The Numbers Are Staggering: U.S. Is 'World Leader' in Child Poverty

America's wealth grew by 60 percent in the past six years, by over $30 trillion. In approximately the same time, the number of homeless children has also grown by 60 percent.

Financier and CEO Peter Schiff said, "People don't go hungry in a capitalist economy." The 16 million kids on food stamps know what it's like to go hungry. Perhaps, some in Congress would say, those children should be working. "There is no such thing as a free lunch," insisted Georgia Representative Jack Kingston, even for schoolkids, who should be required to "sweep the floor of the cafeteria" (as they actually do at a charter school in Texas).

The callousness of U.S. political and business leaders is disturbing, shocking. Hunger is just one of the problems of our children. Teacher Sonya Romero-Smith told about the two little homeless girls she adopted: "Getting rid of bedbugs, that took us a while. Night terrors, that took a little while. Hoarding food.."

America is a 'Leader' in Child Poverty

The U.S. has one of the highest relative child poverty rates in the developed world. As UNICEF reports, "[Children's] material well-being is highest in the Netherlands and in the four Nordic countries and lowest in Latvia, Lithuania, Romania and the United States."

Over half of public school students are poor enough to qualify for lunch subsidies, and almost half of black children under the age of six are living in poverty.

$5 a Day for Food, But Congress Thought it was Too Much.

Nearly half of all food stamp recipients are children, and they averaged about $5 a day for their meals before the 2014 farm bill cut $8.6 billion (over the next ten years) from the food stamp program.

On a typical frigid night in January, 138,000 children, according to the U.S. Department of Housing, were without a place to call home.

That's about the same number of households that have each increased their wealth by $10 million per year since the recession.

The US: Near the Bottom in Education, and Sinking

The U.S. ranks near the bottom of the developed world in the percentage of 4-year-olds in early childhood education. Early education should be a primary goal for the future, as numerous studies have shown that pre-school helps all children to achieve more and earn more through adulthood, with the most disadvantaged benefiting the most. But we're going in the opposite direction. Head Start was recently hit with the worst cutbacks in its history.

Children's Rights? Not in the U.S.

It's hard to comprehend the thinking of people who cut funding for homeless and hungry children. It may be delusion about trickle-down, it may be indifference to poverty, it may be resentment toward people unable to "make it on their own."

The indifference and resentment and disdain for society reach around the globe. Only two nations still refuse to ratify the UN Convention on the Rights of the Child: South Sudan and the United States. When President Obama said, "I believe America is exceptional," he was close to the truth, in a way he and his wealthy friends would never admit.

[Paul Buchheit teaches economic inequality at DePaul University. He is the founder and developer of the Web sites UsAgainstGreed.org, PayUpNow.org and RappingHistory.org, and the editor and main author of American Wars: Illusions and Realities (Clarity Press). He can be reached at paul@UsAgainstGreed.org ]

Map: How 35 countries compare on child poverty (the U.S. is ranked 34th)

Click on the map to enlarge. (Data source: UNICEF)

A new report by the United Nations Children's Fund, on the well-being of children in 35 developed nations, turned up some alarming statistics about child poverty. More than one in five American children fall below a relative poverty line, which UNICEF defines as living in a household that earns less than half of the national median. The United States ranks 34th of the 35 countries surveyed, above only Romania and below virtually all of Europe plus Canada, Australia, New Zealand and Japan.

The above map gives a comparative sense of the data. The blue countries have less than 10 percent of its children below UNICEF's relative poverty line, with the red countries approaching 25 percent. Southern European countries, among the most effected by the euro crisis, have some of the worst rates, although none as low as the United States. Former Soviet countries also score poorly. Northern European countries score the highest. English-speaking countries tend to fall somewhere in the middle.

The poor U.S. showing in this data may reflect growing income inequality. According to one metric of inequality, a statistical measurement called the gini coefficient, the U.S. economy is one of the most unequal in the developed world. This would explain why the United States, on child poverty, is ranked between Bulgaria and Romania, though Americans are on average six times richer than Bulgarians and Romanians.

Here, from the UNICEF report, is the chart of relative child poverty rates (the grey countries are marked separately because they could not provide data for all other indices and are thus not included in the final rankings): 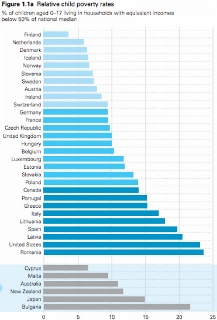 To be clear, this data only reflects developed countries; it tells us nothing about how children in the United States or Europe compare to, for example, children in sub-Saharan Africa. But looking at how developed economies compare can help give us a rough approximation of how these countries are doing at child welfare. And UNICEF is using its own "poverty line" here; the more typical international definition is a family that lives on less than $1.25 or $2 per day. Almost no Americans qualify for this definition. Internally, the United States defines the poverty line as a family living on less than about $22,000 per year, which includes about 15 percent of Americans.

Still, UNICEF's data is important for measuring the share of children who are substantively poorer than their national average, which has important implications for the cost of food, housing, health care and other essentials. Its research shows that children are more likely to fall below this relative poverty line in the United States than in almost any other developed country.

Alarmingly, the United States also scores second-to-last on this measurement, with the average poor child living in a home that makes 36 percent less than the relative poverty line. Only Italy has a wider gap. Here's the chart for child poverty gaps: 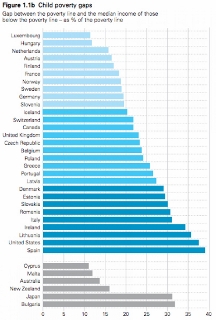 We'll have more on the UNICEF report and what it means for the world's children later on, so please check back.