April 20 was Hitler's birthday, a day when in the past few years neo-Nazis around the world have engaged in terror attacks; and on April 20, 2015 the U.S. Army is officially beginning the training and integration of the Ukraine's neo-Nazi stormtroopers. 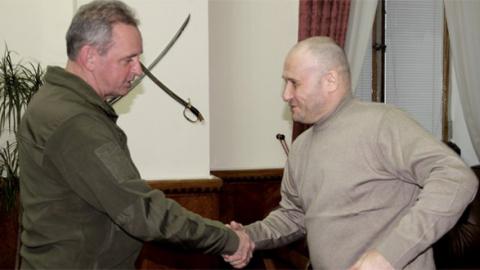 Ukraine's Interpol-wanted leader of extremist group Right Sector, Dmitry Yarosh, has been appointed as an adviser to the country's Chief of General Staff. He has agreed to legalize thousands of fighters as an assault team subordinate to the regular army., David Icke

The US-funded Ukrainian government in Kiev has merged the neo-Nazi Azov Battalion and other battalions (there are several dozen of them) into the Ministry of Defense. Further, the foremost neo-Nazi leader in Ukraine, Dmitry Yarosh, has been made a Special Advisor to the Chief of Staff of the Ukrainian Army (see attached photo). And according to the Minister of the Interior, the US Army is now training Azov.Yarosh is the leader of Right Sector, a political movement initiated through the CIA-backed Organization of Ukrainian Nationalists (OUN) that closely collaborated with Hitler. Through several armed formations (notably the UPA), the OUN killed over a million Jews, Poles, Russians and others during World War II. Right Sector and its military arm, Azov battalion, openly embrace the wartime OUN leaders, Stepan Bandera and Yaroslav Stetsko and the UPA.

Starting today, components of the U.S. Army's 173rd Airborne Brigade will begin training Azov, according to Arsen Avakov, Minister of Internal Affairs, as reported almost two weeks ago by Associated Press. The US embassy denied that it was training Azov, but US agencies have said that they are training three "National Guard" units without identifying them. With the merger of Azov, as well as Aidar and Sich units with nazi ties, they are now called National Guard. The websites of the Department of State and the Pentagon do not mention this deployment on Ukrainian soil, odd given that it is an in-your-face military escalation to Russia.

As further evidence of the nazification of the Ukrainian regime in Kiev, they passed a law banning all symbols, expressions of sympathy or political actions of Communism. The law makes it a criminal offense to deny the legitimacy of "the struggle for independence of Ukraine in the 20th century" and creates new memorials awards and pensions for these actors, which includes Bandera, Stetsko and UPA. Imagine, pensions and awards for mass exterminationists of WWII !

While the law ostensibly bans symbols of German Nazism, it glorifies Ukrainian nazism. Ironically, the Azov Battalion uses 3 German Nazi symbols in its literature, on its flags and on its military unit patches. Fat chance that they will be penalized. This law to criminalize historical truth and political belief, speech and behavior was inspired by pressure brought last October by Right Sector/Azov and others, such as the Svoboda party.

Our government calls the shots in the Ukraine, primarily through Assistant Secretary of State Victoria Nuland to the Ukraine Prime Minister Yatseniuk, who has been on the US payroll for many years. U.S. policy appears to be to strengthen the nazi forces in western Ukraine to use them to beat down the rebels in the east. By giving them state power, the US is making other allies nervous. A Polish retired General who is now a deputy defense minister, Gen. Waldemar Skrzypczak, has been an anti Russian hard liner. But after the law was passed glorifying "bloodthirsty nationalism" he has pulled his support for Ukraine and suggests that Poland will now have trouble supporting Kiev. His family were victims of the UPA and its massacres in 1943 are well known there.

Recently Congress demanded more military aid of the lethal sort to Ukraine. The purpose of the merger of the nazis into the ministry of defense is to increase resources to the nazis by burying it in general military aid so donor nations are not criticized for helping groups like Azov. Since Ukraine is one of the five most corrupt nations on the planet, according to World Bank rankings, even more points are raised on the wisdom of Congress running resolution-based foreign policy.

Groups like Azov, and neo Nazis everywhere, make a big deal about symbolism coded in dates and numbers, such as "88", which not only refers to the millimeter gun size of Hitler's biggest tanks, but to the eighth letter of the alphabet, HH, for heil Hitler. Another date that is highly symbolic is April 20, Hitler's birthday. That is today, the day neoNazis got the gift of a lifetime, six months of expert U.S. military training. Money for Nazis, but none to stop water shutoffs, school shutdowns and home foreclosures. What is wrong here?

Russ Bellant is author of "Old Nazis, the New Right, and the Republican Party," a widely cited compilation of research that in part documents Nazi involvement in the Ukraine. To obtain a free copy, email russbellant@gmail.com