Here is bigotry as a systematic, total mindset having a special affinity for right-wing movements. The author explores its appeal, the self-image it justifies, the interests it serves and its complex connection not so much to antiquity as modernity, shaping the conspiratorial and paranoid worldview of true believers, elitists and chauvinists. It enables their hiding behind mainstream conservative motifs to support policies disadvantaging the targets of their contempt. 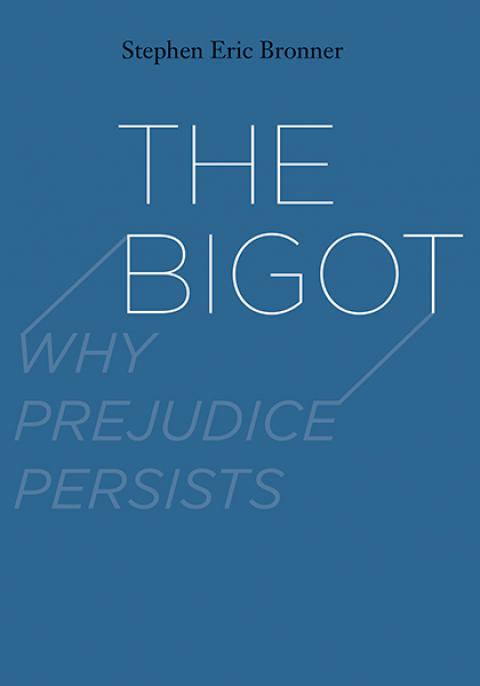 Late last year in Florida, following a federal court's overturning the state law banning same-sex marriage, footage aired on MSNBC of protesters demanding that the odious law be restored. One clip showed a dorky Walter Mitty type getting up in the face of a gay Florida couple filing marriage papers. "Two men and two women can't marry. It's perversion," he shouted. "Don't you understand that it's perversion?"

Here in New York, more than a few of our neighbors have been willing to blame Eric Garner for his death-by-cops, allegedly deserved because he was selling loosies on a Staten Island street corner and put his hands in the air when cops sought to arrest him. In letters to the editor of the Daily News, usually the less rancid of the city's two tabloids, there was a clear subtext that New York is full of lesser breeds whose control is the police's job, no questions asked. Some letter writers weren't even subtle, saying that "they" can't control themselves or their kids, and that New York's Finest needed respect, not second-guessing about officers' proclivities for murder.

Where does this animus toward "the other" come from?

In The Bigot: Why Prejudice Persists, Rutgers University political theorist Stephen Eric Bronner displays a keen understanding of the aggrieved if damaging psychology of the subjects of his book.

For Bronner, the bigot's style "is not a derivative matter, but is instead part of his character. The bigot senses that modernity is undermining his belief system and his ability to make sense of himself . The bigot always directs his hatred against those who threaten (or might threaten) his privileges, his existential worth and the (imaginary) world in which he was once at home . Once the beneficiary of social privilege, the bigot now views himself as a loser . it is always about him and never about his victims."

So bigotry for Bronner has less to do with philosophy or a studied point of view and more to do with anger at "them" getting something "they" don't deserve because "they," well, they ain't "us" and "why don't we benefit more?" Anything that smacks of redistribution, especially to people of color and even low-income whites, is proscribed.

Bronner's emphasis on "privileges" and "victims" reveals both the book's enormous strengths and some weakness. Its strengths lie in looking for a concrete explanation for bigotry that goes beyond bad attitudes of rotten people to suggest that benefits are derived from racial, ethnic and gender oppression. Its key weakness: the text doesn't distinguish between actual privileges, which mostly relate to class, and ascribed privileges, which are social and may be no less detrimental ideologically and culturally but lie in what Marxists name "false consciousness." There's a relationship there - one of course informs the other, but they are not the same.

From the days of Ronald Reagan, the past 35 years have shown that a Republican program fits a bigot's needs. However, a "blame the other, but never the rich" framework is not peculiar to the United States. Far-right nationalist and even openly fascist parties are growing throughout Europe, largely over opposition to immigrants, even as sweeping austerity policies have been key to damaging the well-being of millions of working people and no palpable inconvenience has been caused by migrant labor.

Instead of massing against capital and its political enablers, go blame the outsider for the lack of jobs and a perceived degrading of national culture. The racist siren song doesn't have to deliver, but the left parties do. Since many of these have ceased to provide any sort of credible opposition to a deregulated free-market capitalism, it's little wonder that, purely for opportunistic reasons, French Socialists and the British Labor Party are borrowing from the right's hymnbook, echoing right-wing noises about unassimilated immigrants running amok.

Defining bigots politically as those who are often the least able to ward off the effects of economic crisis and are susceptible to blaming the narrowing of their own life chances on a despised other explains much about why the strategy has legs. As Bronner writes, "securing policies favorable to capital requires conditional support from other larger classes or disunity among those who might offer resistance to any given policies. This gives the bigot a card to play," especially when the U.S. Left and its opposite numbers in Europe find themselves struggling to offer a counter-narrative, let alone force better policies and build movements.

Bronner isn't the first theorist to tackle the dangerous salience of racial and ethnic hatred. Wilhelm's Reich's The Mass Psychology of Fascism (1933) and Theodor Adorno, et. al.'s The Authoritarian Personality (1950) are in their own ways well-regarded classics, too. Add Bronner's to that must-read list.

[Michael Hirsch is a longtime labor and political writer. A member of the National Writers Union, he has worked for four unions as a writer and organizer, served on the executive board of two and taught labor education and sociology in Massachusetts, Indiana and New York.]