Economic assistance under the Marshall plan was important to both countries, but it was the granting of debt relief that made a difference to the Germans. After World War II, Germany not only received direct transfers of money - aid through the Marshall plan. Far more important than the $1.4bn was the granting of debt relief at the London conference of 1953. 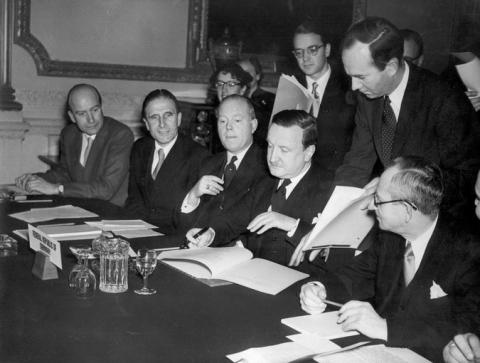 The arguments being used by the Greek government to secure debt relief can be traced back to a little-reported speech made to the students of Harvard University on 5 June 1947.

It was there that George Marshall, the then US secretary of state, floated the idea of a European programme of economic reconstruction. The Americans saw that Europe was on the brink of economic collapse. Industrial capacity had been wiped out. Trade had ceased. People were going hungry and, in Marshall's view, at risk of turning to communism.

Despite being the turning point for Europe's economies after the second world war, Marshall's speech was not considered as especially important at the time. The State Department did not bother to tell anybody in Europe about what he was about to say and the British embassy in Washington did not think it worth the cost to send a cable with an advance copy of the speech to London.

But the speech was covered by the BBC's Washington correspondent and, by luck, his report was heard by the then UK foreign secretary, Ernest Bevin, in a wireless set he kept by his bedside. Bevin seized on the opportunity provided by the Americans, who said the Europeans had to organise their own plan for disbursing the money. "It was like a life line to sinking men," he said later. "It seemed to bring hope where there was none."

Lessons had been learned from the mistakes made after the first world war. Then, the victorious Allied powers had imposed a punitive peace on Germany, demanding heavy reparations that bred resentment.

Marshall tried a different approach. Over four years, the US pumped $13bn into Europe (the equivalent of more than $150bn today) in the hope that it would rebuild economic capacity, enable countries to trade with each other, and rebuff the threat from Stalin's Soviet Union. It was not an entirely selfless act. The US at the time accounted for 50% of the world's output, and needed to find markets for its exports. The lack of demand in countries such as France, Italy and Germany in 1947 meant this was not possible.

Britain was the single biggest beneficiary of Marshall aid, receiving more than a quarter of the total. Germany took $1.4bn (11% of the total), four times as much as Greece received.

Hans Werner-Sinn, the president of the IFO thinktank in Munich, noted three years ago that Marshall aid accounted for 4% of German GDP at the time, while Greece had, even then, received economic assistance worth 200% of its national output.

This, though, overlooks two points. The first is Greek resentment at the German occupation during the second world war. As Bevin's biographer Alan Bullock put it: "Greece was a poor country at the best of times and her economy had been wrecked by the sequence of invasion, occupation, resistance, reprisals and civil war. Eight per cent of the population of seven million had been killed, 10 times the death rate for the UK during the war. The Germans stripped the country of livestock and everything else that could be moved; railways, roads, bridges, ports, had been destroyed."

The second is that direct transfers of money were only part of the help Germany received through the Marshall plan. Far more important than the $1.4bn was the granting of debt relief at the London conference of 1953.

Writing in the Economist magazine in 2012, Albrecht Ritschl, a professor of economic history at LSE, said: "The Marshall plan had an outer shell, the European recovery programme, and an inner core, the economic reconstruction of Europe on the basis of debt forgiveness to and trade integration with Germany. The effects of its implementation were huge. While western Europe in the 1950s struggled with debt/GDP ratios close to 200%, the new West German state enjoyed debt/GDP ratios of less than 20%. This and its forced re-entry into Europe's markets was Germany's true benefit from the Marshall plan."

In the days to come, the Greek prime minister, Alexis Tsipras, will be arguing that was good for Germany in 1953 would be good for Greece in 2015.