The number of deaths is probably greater than the number who perished with the sinking of the Titanic, The passengers on the Titanic included scions of wealthy families — people whose passing was deemed important enough to memorialize in books and movies. By contrast, the five thousand workers at Hawk’s Nest were poor, predominantly Black, and considered expendable in the early years of the Great Depression. 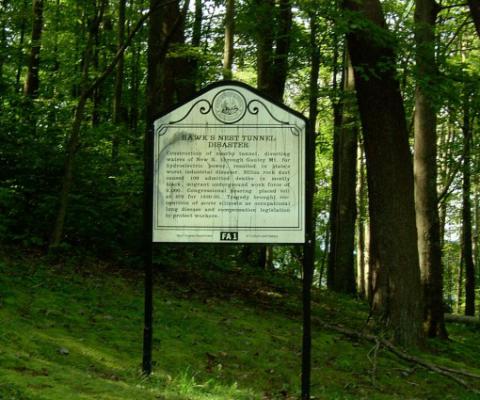 The Hawk’s Nest Tunnel disaster killed more than 750 workers in West Virginia in the early 1930s. It’s the worst industrial accident in U.S. history. And it’s an atrocity few Americans know about.

Industry officials, politicians and the news media successfully downplayed the deaths and injuries at Hawk’s Nest. When corporations cause mass carnage, it often gets swept under the rug or is justified as the price of progress. Mix in the fact that more than half the workers killed at Hawk’s Nest were poor African Americans and you have the perfect recipe for a nonevent.

Many labor historians and native West Virginians are familiar with the Hawk’s Nest disaster. A few books have been written on the topic, most notably Martin Cherniack’s The Hawk’s Nest Incident: America’s Worst Industrial Disaster, published in 1986 by Yale University Press. Sheldon Rampton and John Stauber dedicated a portion of Trust Us, We’re Experts: How Industry Manipulates Science and Gambles with Your Future, a book on corporate public relations efforts published in spring 2001, to Hawk’s Nest. The disaster also was the subject of a novel called Hawk’s Nest, written by West Virginia author Hubert Skidmore and published in 1941.

What is the Hawk’s Nest disaster? Union Carbide wanted to build a 3.8-mile tunnel through Gauley Mountain in Fayette County, W.Va. The tunnel would divert water from the New River and allow it to drop down about 160 feet. The force of the water would then power turbines to create electricity that would be distributed to a nearby Union Carbide metallurgical plant. The name Hawk’s Nest is derived from the many fish hawks that inhabited the cliffs on Gauley Mountain.

To build the tunnel, workers moved forward through the mountain at a rate of about 300 feet per week. But here’s the problem: Workers were forced to break through 99.4% pure silica. At the time, experts knew that miners who inhaled silica dust would contract silicosis, an often deadly lung ailment. Inhalation of silica dust had been identified 15 years earlier as the cause of silicosis.

Aware of the dangers, Rinehart & Dennis still ordered the workers to use a dry drilling technique that would create more dust. Dry drilling is faster than wet drilling, in which dust raised by drilling is washed out of the air by spraying water at the drill tip. In addition, Rinehart & Dennis provided inadequate ventilation, failed to issue protective respirators, and imposed poor living conditions upon the workers.

Regulatory uncertainty over whether the Federal Power Commission, now known as the Federal Energy Regulatory Commission, would exert jurisdiction over hydroelectric projects on the New River also may have been a reason Union Carbide drove hard to finish the project quickly, Ballard C. Campbell writes in the 2008 book Disasters, Accidents, and Crises in American History.

Rinehart & Dennis easily found nonunion workers to build the tunnel, paying them between 15 cents and 30 cents an hour. During the Great Depression, people flocked to Fayette County after they heard there were jobs in the region. Two-thirds of the workers were black migrant workers from the South.

Many of the migrants thought they were coming to West Virginia to work underground in the state’s coal mines. They were right about working underground but wrong about what they would be mining. The interior of the tunnel through Gauley Mountain was a white cloud of silica, impairing vision as well as clogging the lungs. As the workers drilled through the mountain, they kicked up this silica dust and workers eventually started falling over dead from silicosis. Masks were supplied only to inspectors and company managers inside the tunnel. Workers began dying two months after they first entered the tunnel.

The silica the laborers inhaled created extensive and fibrous nodules on the lungs. Their lungs grew stiff. The workers found it harder to breathe and, ultimately, they strangled to death. Rinehart & Dennis and Union Carbide devised a plan to quietly dispose of the bodies while keeping the safety problems hidden. A large number of the dead were reportedly buried in unmarked graves to cover up the immensity of the tragedy.

Dr. Martin Cherniack, a professor of medicine at the University of Connecticut, concluded in his book that 764 men — most of them black — died as a result of their work at Hawks Nest in 1930 and 1931. However, others believe as many as half of the 2,400 men who worked inside the mountain died from acute silicosis. Sixty percent of the African American migrant workers worked less than two months on the project. However, this was long enough to pay a deadly price for signing on at Hawk’s Nest.

“How many workers actually died in the Hawk’s Nest Tunnel? The real number will never be known,” author Troy Taylor wrote. “This is partly because Union Carbide wiped out the historical record and partly because most of the tunnel workers were dismissed at the end of 1931 and scattered throughout the South. Many of the men did not become sick until later, so their deaths never became a part of the official numbers.”

West Virginia officials have done a superb job covering up the truth about Hawk’s Nest. The disaster is not taught in U.S. history classes. Remembrances of the people who died are extremely rare.

In the late 1930s, West Virginia Gov. Homer Holt, a Democrat, refused to sanction a Federal Writer’s Guide to his state until the writers toned down their discussion of Hawk’s Nest. Holt believed the guide would discredit the state and was “propaganda from start to finish” After leaving office, he served as general counsel of Union Carbide.

In the 1960s, a West Virginia university professor received more than a dozen death threats when he tried to interview some of the survivors, Sheldon Rampton and John Stauber wrote in their book, Trust Us, We’re Experts.

“The number of deaths is probably greater than the number who perished with the sinking of the Titanic,” they wrote. “The passengers on the Titanic included scions of wealthy families — people whose passing was deemed important enough to memorialize in books and movies. By contrast, the five thousand workers at Hawk’s Nest were poor, predominantly black, and considered expendable in the early years of the Great Depression.”

The tunnel through Gauley Mountain and hydroelectric system was completed 80 years ago and still stands today. There is a commemorative plaque at the site that describes it as an engineering marvel. In 1986, the state of West Virginia finally agreed to place a second marker at the site, a three-foot-square sign “with a mere eleven lines of text dedicated to the memory of the men who died there,” Rampton and Stauber noted.

When workers started getting sick, newspapers published blatantly racist articles, attributing the lung problems to poor habits of nutrition and an unusual susceptibility among African Americans to pneumonia. Union Carbide, Rinehart & Dennis and local officials were worried revelations of suffering by industrial workers would arouse sympathy and outrage among the public.

The Fayette Tribune, to its credit, tried to dig deeper into why so many workers were becoming ill and dying. But the newspaper claimed it could not verify facts at the construction site. “Rumors and reports of various conditions known to exist at the tunnel and dam project are discussed generally by residents but little first hand information obtainable because of the ‘gag order’ enforced by executives of the contracting company which employs about 1200 men. Officers of the law state that company refuse to converse with them and laborers do so with fear of losing their jobs. The Tribune has been appealed to on more than one occasion to lay bare these atrocious conditions against humanity, but facts obtainable have not been provable,” the Tribune reported in a May 20, 1931, article.

According to Cherniack, there was little doubt that local editors were dissuaded from publishing stories that might rouse negative feeling toward the Hawk’s Nest tunnel project. Two weeks after publishing the article about the “atrocious conditions against humanity,” the Tribune shifted gears by publishing a glowing account of the construction project, with the headline “Army of Workmen Drilling Through Gauley Mountain.”

Union Carbide was able to remain detached in the eyes of both the public and the law from the horror at Hawk’s Nest, Cherniack discovered in his research. This power to control the narrative would serve the company well during civil legal proceedings that would be held later in the Fayette County Courthouse.

In legal settlements reached in 1933 and 1935, Union Carbide and Rinehart & Dennis staved off major financial hits. The financial settlements reached with Hawk’s Nest workers and their families were paltry. The companies offered death benefits of $1,000 to wives of white workers and $800 for sons who died. The families of the African American workers were offered $400 for a son and $600 for a husband.

After he was elected to the U.S. Senate in 1934, Rush Holt from West Virginia brought the plight of the Hawk’s Nest workers into the national limelight. “Congress has just started to investigate the building of Hawks Nest Tunnel, known as the village of death. I personally believe that two thousand men are doomed to die as a result of ruthless destruction of life by American industry,” Holt said at the time.

Later, in 1936, a Senate subcommittee investigated the disaster. The subcommittee’s report lambasted conditions at Hawks Nest. At the time, President Roosevelt’s labor secretary, Frances Perkins, declared “war” on silicosis in response to the Hawk’s Nest disaster and other workers across the U.S. developing the disease. But by 1940, the Hawk’s Nest disaster was no longer in the headlines and concern about silicosis had diminished.

“They were taking the dead bodies out in wheel barrows and dumping them in mass graves. That’s not supposed to happen in America,” West Virginia historian Chuck Keeney said in an interview. “Nobody gets punished for Hawk’s Nest. Nobody goes to jail. And nobody even knows about. How many other things have happened in other places of America that get covered up?”

Mark Hand has reported on the energy industry for more than 25 years. He can be found on Twitter @MarkFHand.

[For information on safe practices, look at the website of Creative Safety Supply -- moderator.]