The Kindness of Strangers: The Refugees in Budapest, and my Father's World War II Refugee Story

The refugee influx struck a strong emotional chord with me, as a Hungarian-American visiting my parents' homeland. I had arrived in Hungary on August 25 with my wife Debi, to visit my late Catholic mother's relatives, and retrace the stories of my Jewish father who had survived the genocide of World War II. 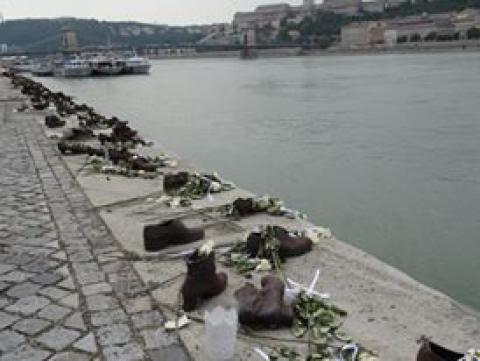 My grandfather and many other Jews were marched to the Danube, and executed by the icy river. Many were ordered to remove their shoes before being shot. On the river embankment today, a line of bronzed shoes memorializes this Nazi New Year's Eve massacre.,Zoltán Grossman

Hungary is becoming the Arizona of Europe. It is the main country where war refugees and other immigrants first set foot in the North -- in this case the contiguous states of the European Union. Just like in the American Southwest, immigrants are dying in sweltering trucks, officials are erecting border walls and detention camps, and far-right hate groups are targeting the immigrants as a threat to national identity.

Yet also like in the Southwest, many individual Hungarian citizens have stepped forward, providing water, food, medical aid, and encouragement to the Syrian, Iraqi, Afghan, and other refugees who are fleeing repression and war. Despite their right-wing government's opposition to immigration (at least by brown, Muslim immigrants), some Hungarians understand that any refugees who are returned home face violence or even death. A few even compare the Syrians to the refugees who fled across the Austrian border after their own failed 1956 revolution.

Just ask László Sipos, who was a child refugee in 1956 and raised in New Jersey. He has spent the past month at the Keleti (Eastern) train station in Budapest, the scene of dramatic confrontations between Hungarian police and war refugees. He has been among the hundreds of volunteers who have set up a small refugee camp next to the station, and provided needed supplies for refugees' westward journey to asylum. As the refugees at the station encounter police checking their IDs, and turning or pushing them and their kids away from the westbound trains, they have also encountered the kindness of strangers.

When visiting the station last week, I saw volunteers from local and international human rights groups sorting donated clothes, shoes, and food, providing phone charging and wi-fi, and escorting refugees to and from trains. Volunteers arrived in cars stuffed with schoolkids' gift bags, some with Disney princesses on them. Homeless communities, taxi drivers, and Roma (Gypsies) have been active in the solidarity work. A sign at the station read, "All we have here is given out of love from the Hungarian people -- *not* its government."

On September 12, as part of the European Day of Action for Refugees, hundreds gathered at Keleti station to listen to speeches and music by Hungarian citizens, the city's small existing immigrant communities, and recent refugees. They held signs saying "Refugees Welcome," "No One is Illegal," "Not in My Name," "We Are All Human," and "Jesus was a Migrant." A Jewish youth organization afterwards hosted a fundraiser for the Muslim refugees at the nearby Auróra community center.

This pro-refugee solidarity has gone largely unreported in the western media, which focuses entirely on the intransigence of the Hungarian government. Now the government has implemented a state of emergency along the Serbian border, enforced with razor wire and tear gas, along with a new law criminalizing both border-crossers and Hungarian citizens who offer them aid. Veronika Kozma, a co-founder of the MigSzol Csoport (Migrant Solidarity Group of Hungary), reiterated that "many, many Hungarians do not agree with the government's actions and policies, which violate the rights of both refugees and citizens."

The refugee influx struck a strong emotional chord with me, as a Hungarian-American visiting my parents' homeland. I had arrived in Hungary on August 25 with my wife Debi, to visit my late Catholic mother's relatives, and retrace the stories of my Jewish father who had survived the genocide of World War II. I found to my amazement that the building where my refugee father (as a six-year-old boy) and his parents were interned near the end of war, was only a block away from the Keleti train station where the current refugee drama is unfolding.

I visited Poltár, a town across the border in Slovakia where my father was born on May 31, 1938. He was actually a U.S. citizen, because his father had been born in New York (his mother was a Hungarian citizen). When the Germans set up a fascist puppet state later in 1938, my grandfather was enslaved with other Jews in a local labor camp. He wrote the U.S. State Department asking for a new passport, but an official letter replied that he would have to travel to the U.S. Embassy to acquire it, at a time when Jews were no longer permitted to travel - a bureaucratic "Catch 22."

When my grandfather escaped the labor camp, my family fled across the border into Hungary, where they stayed with relatives in *Mezo*túr. My family kept my father out of sight until he learned fluent Hungarian, because if he spoke with a Slovak accent they would be reported to police as refugees. Their situation became desperate in March 1944, when Hitler invaded Hungary to replace its pro-Mussolini regime with rule by the Nyilas (Arrow Cross) Nazis.

Most of my family members were deported to Auschwitz, but my grandparents and father were instead treated as enemy nationals. They were moved to a Budapest internment camp, which the Allied Air Force hit in its July 1944 carpet-bombing of the city. A man pulled my family out of the rubble; my father still has shrapnel marks on his back from that attack.

The survivors of the bombing were moved to a former school for the deaf and mute on Festetics Street, in what is today the Frigyes Schulek School. The building, located one block from Keleti station, today looks exactly like it did in prewar photographs.

It was from that school that my grandfather was taken by German-speaking troops in the early morning hours of January 1, 1945, as Soviet forces were closing in on Budapest. The troops had planned to kill all the Jews, but a German Wehrmacht (Army) officer passing by the school ordered them -with little authority-- to spare the women and children.

My grandfather and many other Jews were marched to the Danube, and executed by the icy river. Many were ordered to remove their shoes before being shot. On the river embankment today, a line of bronzed shoes memorializes this New Year's Eve massacre.

After the massacre, my father and grandmother were moved into the Jewish Ghetto, west of the train station, where Jews were living in crowded, squalid conditions awaiting starvation or deportation. After about a week, my grandmother escaped the Ghetto with her son, by pretending to be the widow of a corpse being taken to a mass grave. They ducked into a hospital, and were hidden in the basement by a sympathetic doctor. A woman from the underground resistance later brought them false identity papers that enabled them to rejoin their relatives.

My father and grandmother had survived only because strangers had helped them at critical moments: the man who pulled them from the rubble, the doctor who hid them, the woman from the underground who gave them papers, and even the German officer who intervened to save them. None of them knew my family, but I never would have been born without them.

My father's stories of these events have echoed loudly these past few weeks, even though Europe's treatment of Jews in 1944 and Muslim refugees in 2015 are hardly comparable in their scale of brutality. I remember his stories because they resemble the stories of the Muslim refugees who are now seeking shelter from extreme violence in their countries, with little support from western bureaucracies. 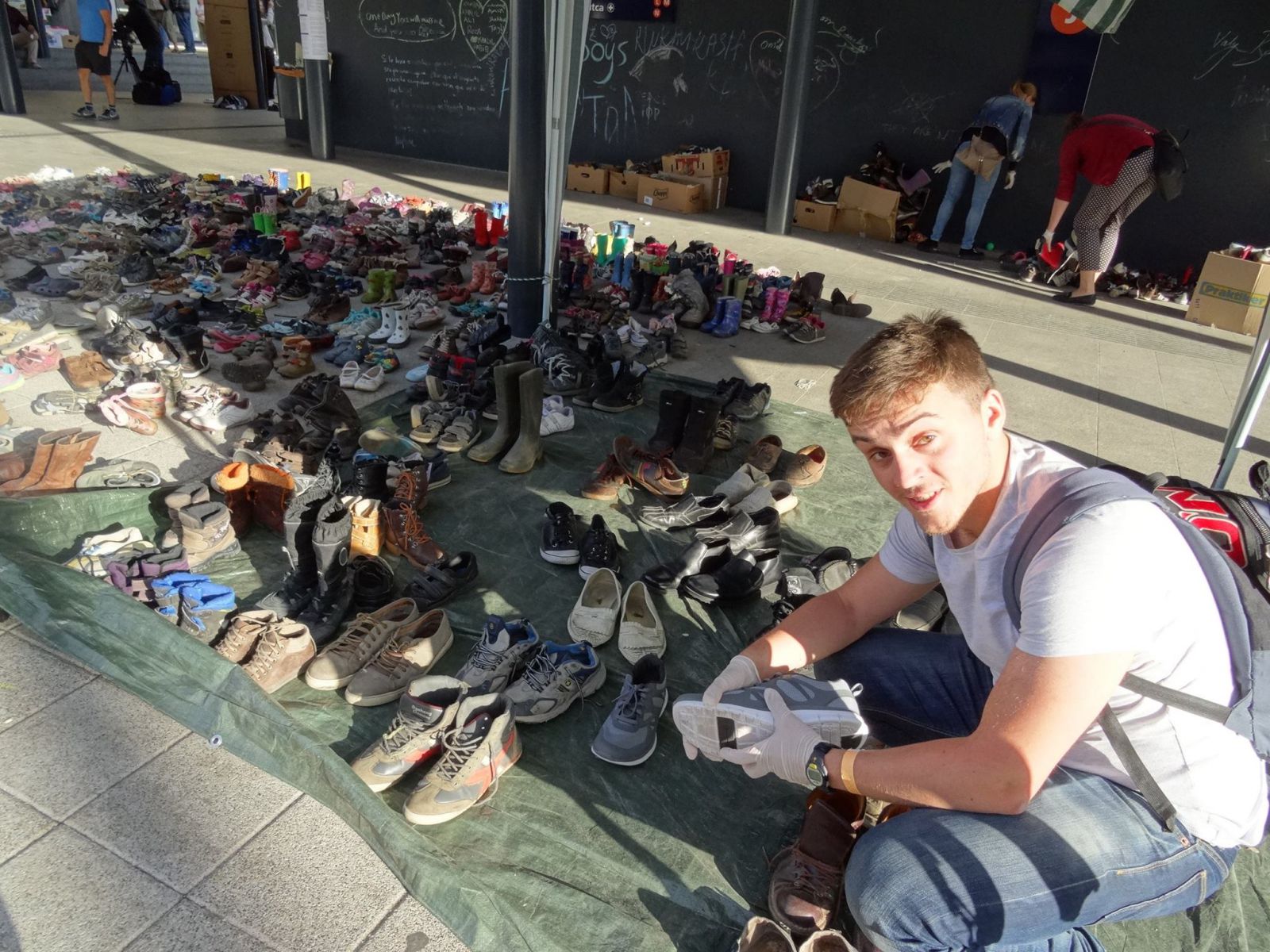 Volunteers with donated clothes, shoes, and food, phone charging and wi-fi, and escorting refugees to and from trains. Photo by Zoltán Grossman

I hope that when the refugees who have fled the horrors of Syria, Iraq, or Afghanistan share their stories with their kids and grandkids, that they mention the Hungarians who defied their own government to offer a helping hand in a time of need. The lines of donated shoes at Keleti station carry the opposite meaning of the line of bronzed shoes by the Danube. Whether in the 20th or 21st centuries, surviving war and repression is only made possible through the kindness of strangers.

[Zoltán Grossman is a professor of Geography and Native Studies at The Evergreen State College in Olympia, Washington. His website is http://academic.evergreen.edu/g/grossmaz and email is grossmaz@evergreen.edu]