The Next Big Voting-Rights Fight

If you’re no longer drawing lines on population but you’re selectively using criteria like age, that hits [the Hispanic] community very hard. Put aside the whole citizenship issue. The largest group of people who would be subtracted from the apportionment base would be children, and because [Hispanics] have disproportionately so many more children than the Anglo population has, that starts shifting seats all by itself, before you start to even consider citizenship. 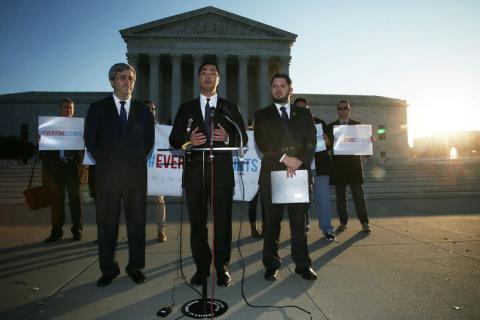 Over the past year, The New York Times Magazine has chronicled the long campaign that led to the Supreme Court’s 2013 nullification of the Voting Rights Act’s most powerful provision — its Section 5 — and the consequences that decision has had for minority voters. As I’ve written in our Disenfranchised series, the gutting of Section 5 facilitated an onslaught of restrictive new laws that made voting disproportionately harder for minorities across the country, marking the biggest setback to minority voting rights in the half-century since President Johnson signed the Voting Rights Act.

Earlier this month, the Supreme Court heard a new case, Evenwel v. Abbott, that could also have a significant effect on minority political power — specifically, Hispanic voting power. Evenwel stems from a case first instigated in Texas by the same conservative group — the Project on Fair Representation — that helped bring about the decision gutting Section 5 in 2013. Like all of these big election cases, the issues involved are complicated, which may explain why Evenwel has drawn less media attention than it deserves; it does not reduce easily into sound bites. But the Court’s decision in Evenwel could be among the most important developments in politics in 2016, and well beyond. This series would not be complete for 2015 without a review of the case. My colleague Emily Bazelon and I have done our best to break it down as simply as possible, trading off segments to explain the main legal questions at play, the potential consequences and the likely outcomes. A decision is expected by June of 2016. JIM RUTENBERG

BAZELON: Who Counts as a Person?

One person, one vote. It’s the rare Supreme Court rule that has the clarity of a slogan. More than 50 years ago, in 1964, the Supreme Court declared that the principle of “one person, one vote,” rooted in the Constitution’s Fourteenth Amendment guarantee of equal protection under the law, required states to draw their legislative districts so that seats are “apportioned on a population basis.” (The rule of one person, one vote also holds for Congressional districts, but that’s based on a different source in the Constitution — Article I, plus Section 2 of the Fourteenth Amendment. So Evenwel v. Abbott isn’t about Congressional elections.)

“Apportioned on a population basis” seems clear, too: Population means every person. Babies, nonagenarians, and everyone in between. If your state senate district has 500,000 people in it, then mine should too, more or less — though in reality, the court has since allowed for deviations within a margin of 10 percent.

I sound like I’m sure about this civics lesson, but this clarity could be illusory. In that 1964 ruling, Reynolds v. Sims, the Supreme Court also talked in terms of safeguarding an individual’s vote “when compared with votes of citizens living in other parts of the state.” That makes it sounds as though the court’s main concern, as Judge Alex Kozinski pointed out in 1991, is “making sure that each voter gets one vote” — not that each person gets representation.

Which is it? Can states choose? The Supreme Court has never really made that clear. Other rulings use the terms “population” and “voters” interchangeably. Most of the time, they basically are, and whether a state apportions legislative districts by population or by eligible voters, the lines around legislative districts are drawn the same way. But if you have a lot of people in one place who can’t vote, that’s no longer the case. That’s most likely in states with lots of noncitizen immigrants, like Texas, Arizona and New Mexico. Every state in the country presently uses population numbers to draw district lines. Changing that would have widespread implications.

If you want to see just how dramatically the ethnic makeup of this country is changing, check out the population estimates that the Texas State Demographer keeps online. They show that some 400,000 Hispanic babies are joining the Texas population each year. That number is project to approach 500,000 over the next decade. At the same time, births of non-Hispanic whites will fall to less than half of that — and “Anglos,” as non-Hispanic whites are widely called, will move closer to the ends of their life spans at nearly three times the rate that Hispanics will.

Given that in the current national environment Hispanics tend to prefer Democrats to Republicans by wide margins, the most important question in American politics becomes: When does the full impact of this new America become apparent? Evenwel could go a long way in helping to decide that question.

It is fitting that the case comes out of Texas. As I wrote last week, the Hispanic population boom helped earn the state four additional Congressional seats after the release of the last census, in 2010. Given Hispanics’ partisan tendencies, at least a couple of those seats seemed bound to go to the Democrats, along with some House and Senate seats. But the Republicans who control the Texas State House, and with it the redistricting process, were able to devise a plan to keep that from happening, largely by using highly sophisticated gerrymandering techniques to dilute Hispanic voting blocs. That plan, devised in 2011, was halted in court and is still facing a legal challenge. But when it comes to state and local districts, success in the Evenwel case would likely render any such gerrymandering unnecessary. (Some legal scholars believe the same would eventually hold true for Congressional districts, too — for more on that question, check out this Election Law Blog post by Rick Hasen, a professor of law and political science at the University of California, Irvine.)

If the court rules that states and municipalities must base their political districts on populations of “eligible voters” — that is, citizens who are 18 and older — districts would become less Hispanic and more Anglo. Most of the news coverage of the case has provided the easiest-to-grasp reason for this: because most noncitizens are Hispanic immigrants. But the removal of children from the population figures would have a far greater impact, according to civil rights lawyers involved in the case — especially in places like Texas. A large number of noneligible voters in the state are Hispanic children, most of whom (per the State Demographer’s Office) happen to be citizens. By switching to an “eligible voter” standard, you effectively disappear the higher Hispanic birthrate, at least until those babies and toddlers turn 18.

“If you’re no longer drawing lines on population but you’re selectively using criteria like age, that hits our community very hard,” Nina Perales, vice president of litigation at the Mexican American Legal Defense and Educational Fund — which is helping to fight the case — told me during an interview last month in San Antonio. “Put aside the whole citizenship issue. The largest group of people who would be subtracted from the apportionment base would be children, and because we have disproportionately so many more children than the Anglo population has, that starts shifting seats all by itself, before you start to even consider citizenship.”

RUTENBERG: “An Element of Fairness”

During an interview at his home in Maine last summer, Ed Blum, the founder of the Project on Fair Representation, told me his interest in the case stems from his conviction that the current standards undermine the rights of voting citizens. “I want an element of fairness brought in,” Blum told me, “because I do think it’s unfair when each district has 100,000 persons but one district has 90,000 who are eligible to vote whereas a neighboring district only has 40,000 or 50,000 eligible to vote — 50,000 get one representative whereas 90,000 people get one representative.” In Blum’s view, then, not all eligible voters are equally represented. The original suit called upon the court to force Texas to take into account eligible voters’ “right to an equally weighted vote.” Blum told me he was not wedded to stripping citizen children from the population, but it’s hard to see how the court could, or would, parse that from a requirement to weight districts toward eligible voters.

And the lawyers for Blum’s group seem committed to a strict definition of “eligible voters,” even when faced with patently unjust hypotheticals. As our colleague Adam Liptak wrote, during this month’s oral arguments Justice Ruth Bader Ginsburg asked William Consovoy, a lawyer for the plaintiffs, whether women should have been excluded from political population counts before they had the right to vote. Consovoy, after some pressing, answered: “An equal weight for voters has to matter. A noncitizen or any other disenfranchised person would not have the ability to bring a one-person, one-vote claim.” He said disenfranchisement could be, and had been, remedied through other political and legal means. He didn’t say it outright, but he was partly referring to the Voting Rights Act of 1965, which drew the final curtain on the discriminatory voting laws of the Jim Crow era — the same law Blum’s group had successfully moved the court to gut in 2013.

BAZELON: And the Verdict Will Be ...

If Blum’s case succeeds in creating a requirement that states use voter rolls or eligible voters for political districts, it would be incredibly disruptive across the country. It’s a logistical mess. Not gonna happen.

Another possibility: The court says that states can choose to switch to eligible voters. Texas says it already has this choice, based on a 1966 case, Burns v. Richardson, but it’s old and kind of shaky, and no state has tried this. At the moment, Texas doesn’t want to — the state is defending population-based voting in this case. But if the court said to Blum and his allies, “You win if you can convince the state legislature,” wouldn’t there be pressure on Republican elected officials to take the leap?

There’s a technical reason, however, why Blum may lose, even though Roberts and other conservative justices are often aggressive in elections cases. This case didn’t take the usual path, from district court, to appeals court, to a petition for Supreme Court review. It comes from a special legal creature called a three-judge district court. Congress put these in place for some campaign finance and voting rights challenges. The lawyers who work for Blum have gotten very good at framing their claims for these three-judge district courts. Once you’re there, you don’t appeal to an appeals court. You go straight to the Supreme Court. And if the Supreme Court doesn’t take the case, and just affirms the three-judge ruling, that’s binding precedent, as if it had come from the Supreme Court itself — not the reasoning, but the result. So the Supreme Court has been feeling obligated to take a lot of these cases. John Roberts has said as much, as the law professor Rick Hasen has pointed out. Hasen doubts most of the conservative justices reached out to open the door for Blum. Maybe they don’t want to do anything more than make clear that “one person one vote” means exactly what everyone thought it did.