A children's book showing happy slaves in the South was pulled off the market last weekend after a major controversy about its contents. This is just the latest flareup in an ongoing dispute about books aimed at children that show slavery and racist subordination in a positive light. 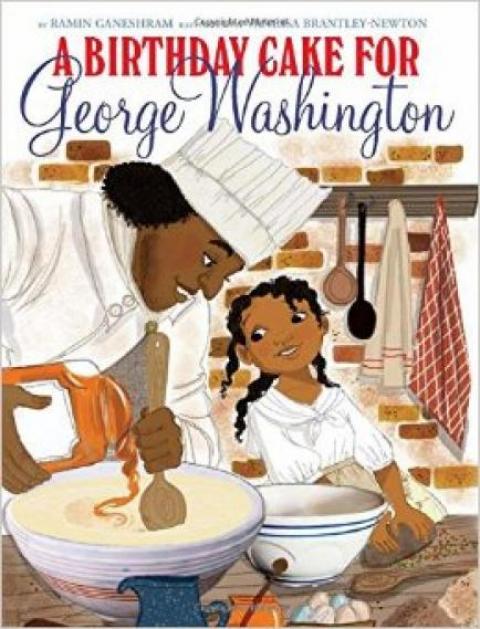 Update 1/17/16 8:30pm Amidst growing criticism of a children's book depicting happy slaves baking a cake for George Washington, publisher Scholastic has announced it is pulling the book from retailers. In a statement to the Associated Press, Scholastic said this:

“While we have great respect for the integrity and scholarship of the author, illustrator and editor, we believe that, without more historical background on the evils of slavery than this book for younger children can provide, the book may give a false impression of the reality of the lives of slaves and therefore should be withdrawn.”

Earlier today The Root published this critique from Demetria Lucas-D'Oyley.

I learned about Scholastic’s new children’s book, A Birthday Cake for George Washington, when a friend emailed me on Friday to ask, “Uh … have you seen this [expletive]?” Her note was accompanied by the book’s back cover, which depicted an illustration of a smiling enslaved man and child, accompanied by their beaming master—America’s first president, George Washington. Washington had his arm around the enslaved man’s shoulder like they were bros instead of oppressor and oppressed.

My knee-jerk reaction was a string of expletives as I tried to process this level of disrespect. Can you imagine a modern-day American publisher pushing a book about a cheery Jewish father and daughter on a trivial mission to bake a cake for the birthday of, say, an SS guard at Auschwitz? Can you picture a children’s book depicting a Jewish dad and child at a concentration camp snuggled up and cozy with Hitler?

Never! So why is it somehow OK to show enslaved black folks practically cuddling with their oppressors?

I woosahed. I had to be misunderstanding. Scholastic is a respected children’s book publisher. They deserved the benefit of the doubt. This book couldn’t be what I was imagining. There had to be levels, satire … something I wasn’t getting.

But then I Googled and found my initial assumption, sadly, was correct.

Scholastic’s website describes A Birthday Cake for George Washington as “a slice of history in a picture-book narrative that will surely satisfy.” This reading material, aimed at 7- to 10-year-olds, is authored by Ramin Ganeshram, (a black woman, in case you were wondering), a former New York Times food writer, and illustrated by Vanessa Brantley-Newton (also black, in case you were also wondering).

In short, A Birthday Cake, “based on real events,” is the jolly story of two “servants”—Washington’s enslaved chef, Hercules, and his precocious daughter, Delia. The pair are preparing Washington’s favorite dessert for his big day, but they have a dilemma. No, not that they’re enslaved, but that they don’t have the sugar to make their oppressor’s birthday confection.

Kirkus Reviews describes the book as “cheery” and says the enslaved people are “smiling on nearly every page.” The book also mentions that the father heads to the market in a fancy coat, a swinging gold watch and a top hat.

I am not making this up.

In a note included in the book, Newton explains her choice to include smiling enslaved people: “My research indicates that Hercules and other servants in George Washington’s kitchens took great pride in their ability to cook for a man of such stature. This is why I have depicted them as happy people.”

As you can imagine, there’s been substantial backlash to the book, given its incomplete and sanitized depiction of enslaved people (Change.org has a petition calling for the book’s removal from Amazon).

Ganeshram got wind of her critics and offered the following explanation on the Children’s Book Council’s website:

“It is the historical record—not my opinion—that shows that enslaved people who received ‘status’ positions were proud of these positions—and made use of the ‘perks’ of those positions … Many of us don’t like to consider this, fearing that if we deviate from the narrative of constant-cruelty we diminish the horror of slavery.”

“[Hercules] was a man renowned for his skill; a man respected by President Washington, a man who lived with pride and dignity.”

Oh, really? Riddle me this: How do you respect a human being that you enslave? Appreciating good cooking and complimenting a meal isn’t respect. Setting free the person you’re enslaving—and their family—is respect. And Washington didn’t do that.

Let’s unpack this further. Ganeshram is correct that humans have the capacity to be proud of their work even under the worst conditions. But is the tale of a giddy father-daughter duo on a mundane search for sugar the right way to introduce children to the foundation of American economics? I’m not saying start babies off with 12 Years A Slave or Beloved, replete with male and female rape, neck irons and whippings. I am saying we can do better than a depiction of our nation’s past (with lingering present-day influence) that plays up the misnomer of benevolent enslavers and cheerful, proud slaves.

You want to introduce children to slavery? Write about a child trying to survive after his or her mom and/or dad—or hell, the child—are sold off to another owner. Write about an exhausted child working the fields from sunup to sundown. Write about a child being punished for learning how to read. Those are the realities of slavery worth reading about.

And if you really must show happy, enslaved people? Show a mother buying her enslaved child’s freedom. Show a master having a come-to-Jesus moment and freeing all the people he’s been oppressing. Show someone dreaming up a flaw-free getaway plan from a plantation, then executing that successful escape. That’s the only kind of happy enslaved person worth seeing.

Slaving, literally, over a hot 18th century stove to bake a cake for a man who has you and your child in bondage ain’t happiness or pride.

It’s busy work to pass the time while you’re plotting your escape, which is what real-life Hercules was up to. The website for Washington’s home, Mount Vernon, says Hercules ran away, “one of the few instances of a member of Mount Vernon’s enslaved community successfully escaping during Washington’s lifetime.”

Surprise, surprise. Hercules wasn’t so happy on the plantation after all. And I’d rather children know that story, the real one, than this whitewashed version Scholastic is shilling.

Demetria Lucas D’Oyley is a contributing editor at The Root, a life coach and the author of Don’t Waste Your Pretty: The Go-to Guide for Making Smarter Decisions in Life & Love as well as A Belle in Brooklyn: The Go-to Girl for Advice on Living Your Best Single Life. Follow her on Twitter.