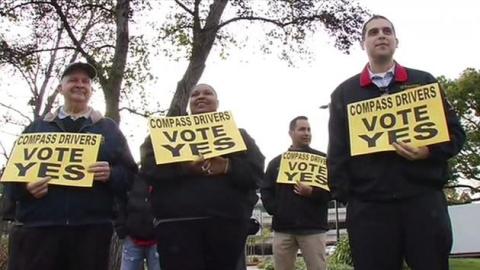 The Teamsters have organized bus drivers who take tech workers to their Silicon Valley campuses. Will that help the elite workers see the wisdom of joining a union?,abc7news.com
Last week, the drivers who shuttle San Francisco Google employees to work voted to unionize with the Teamsters. How long until their passengers do the same thing?
The more than 100 employees of WeDriveU, a third party contractor that drives tech employees to work, join more than 450 other tech shuttle drivers who have unionized over the past year. These workers—who pick up and drop off employees from Facebook, Apple, eBay, and other top tech companies—work grueling hours, and recently had to file a class-action lawsuit to try to get paid for the time they spend waiting around at tech company headquarters to pick up the employees for the trip home. Their union contract will bring them a pay raise, time off, health care, and other benefits.
These tech shuttle buses have become symbolic of the two-tiered Silicon Valley economy, in which high-paid tech workers are forcing out the middle class. Protesters have even blockaded roads to stop the buses, waving signs about high rents and inequality. The fact that the drivers of those buses are now unionized only magnifies the public outrage that will be directed at the actual targets of those protests: the tech employees inside the bus.
It is true that the booming tech economy has warped San Francisco and all of Silicon Valley beyond recognition. It is true that the middle class (not to mention the lower class) is being completely priced out. There is also at least a grain of truth to the objections of those hated tech workers inside the bus, who will say that they are simply kids with a dream, doing what they love, and that they never intended to become living symbols of income inequality. Silicon Valley—as a real place, rather than a metaphor on the lips of grandiose venture capitalists—is a cauldron of justified class resentment and wounded egos on all sides. Meanwhile, the executives and large investors at these tech companies are reaping the financial gains with little care for these low-level human squabbles.
So what can the well-intentioned young employee of Google or Facebook or Apple do about all this? How can the tech worker sitting on that bus, with a unionized driver and an angry crowd of sign-waving locals outside make a meaningful gesture towards equality? Here is how: they can unionize themselves.
Most of these tech workers are relatively well-compensated and work in highly desirable jobs. The immediate reaction to suggesting that they should unionize tends to be one of dismissal. But why? The fact that tech companies are profitable and pay their employees well relative to other, less profitable industries does not change the fact that they operate according to the same rules of capital and labor that all other companies do. That means that a very small group of people who control the capital get most of the profit, and a much larger group of people who do most of the work get much smaller returns. It also means that those workers who do most of the labor can increase their bargaining power—and get a better deal—by bargaining collectively, rather than as a bunch of individuals. This is a universal truth of the workplace. The fact that your company gives you good free lunches and shuttles to work and nice paycheck does not change the fact that you could get more by negotiating together, as a union. Anyone smart enough to get a job at Google is smart enough to grasp these facts.
Of course, this would require some level of class consciousness, which does not seem to be in ample supply in Silicon Valley. Megalomaniac libertarians spouting borderline Nietzchean arguments about Great Men Accomplishing Great Things tend to have an outsized platform in tech, for some reason. But I do not doubt for a moment that there are thousands and thousands of regular old employees at these enormous, successful tech companies who are concerned about the economic inequality that their industry is driving; who are concerned about the demoralizing lack of diversity in their industry; who are concerned that they are forcing the middle class out of an entire region of the country. The most meaningful way for them to take action against the inexorable rise of inequality that is benefiting them is to stand up and declare that they are on the side of labor, rather than on the side of capital—to declare that they are workers who are on the side of all of the other workers, from shuttle drivers to gardeners to janitors to security guards, who make these tech companies function. The way for them to do that is to unionize. Once they have unionized, they will be in a position to put their considerable collective power behind policies that spread the wealth more widely, and mitigate the kind of inequality that their industry has been fueling for years.
They will also, in aggregate, get more money.
Plenty of tech employees will scoff at this idea, say “I’m doing fine,” and move on. But as the entrepreneurial wizards of Silicon Valley know, the fact that many ignore a market opportunity just provides an opening for those bold enough to seize it. It only takes a few who see the big picture to start a movement. In an industry full of people obsessed with progress, there is a chance for a leader to emerge to start a movement towards social progress the likes of which their industry has never seen. Tech workers are not America’s most exploited workers. They are, though, some of America’s most envied and celebrated workers. Their declaration of unity with the labor movement would mean more than any individual charitable contributions they might make to try to salve their conscience.
Disrupt yourself, techies. Organize.
Subscribe to Portside