In the two years since Colorado legalised cannabis, chefs in the state have been finding new ways to make a meal of it.

May 23, 2016 Jonathan Thompson The Guardian
Printer friendly
Cooking With Cannabis Published May 23, 2016 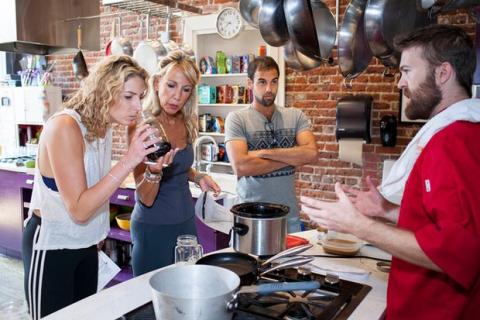 New Yorkers Roz Bielski and daughter Rachel at a cookery class in Denver.,Mark Chilvers for the Guardian

“This is delicious, Roz Bielski says, dabbing her mouth with a napkin. “Like eating a cloud. This is the kind of food I’d picture eating in heaven.”

It is just after 10am on a sunny Sunday morning in Denver’s Highlands. Clusters of smart churchgoers saunter past the windows of the restaurant; an impossibly healthy-looking young couple follow, pedalling up the hill with yoga mats slung over their shoulders. Then the peace is cracked by a cackle. Roz, a wealthy 62-year-old from New York who looks at least 10 years younger, breaks down into girlish giggles as she passes a large slice of sponge tart to her twentysomething daughter, Rachel. “Look, darling, I’m your biggest flan,” she guffaws, bent double with laughter as crumbs fly from her mouth. “YOUR BIGGEST FLAN!”

It has been just over two years since the state of Colorado legalised cannabis use, and the two-and-a-half-hour cannabis cookery class I’m attending at an upscale eatery in Denver is booked out for weeks. Students such as Roz and Rachel fly in from all over the US to learn how to embrace the ultimate herb and how to cook with it.

Colorado has issued more than 350 edible marijuana licences, but those holding them – for both recreational and medicinal purposes – are light years ahead of the stereotyped stoners baking hash cakes. High-profile chefs have been drawn to the challenge, including Chris Lanter, owner and head chef of Cache Cache, the top restaurant in America’s glitziest ski resort, Aspen, and Hosea Rosenberg, who wonTop Chef, a hit cooking show. The Ganja Kitchen Revolution, a gourmet cookbook by Coloradan chef Jessica Catalano, became an Amazon bestseller when the state first legalised marijuana, and is now the go-to book for aspiring cannabis chefs.

“From a chef’s point of view, cannabis should be placed in the same bracket as basil, sage or rosemary,” Catalano says as she prepares for a cannabis-infused dinner party at her home, a converted firehouse in the mountain town of Silverthorne. “It’s a fascinating herb with multiple flavour profiles.”

Catalano, like other professionally trained chefs using cannabis as an ingredient, selects her strains extremely carefully. Within the two major marijuana groups – uplifting sativas and the more calming indicas – there are a wealth of different tastes to harness. Today, she’s cooking with one of her favourite strains, super lemon haze, a sativa with sweet floral notes.

“It tastes a little like candied lemon when it’s activated,” Catalano says. “This strain goes particularly well with scallops, but also tomatoes, basil and balsamic vinegar, which I’m using today.”

As a pregnant Catalano places the crushed marijuana on a baking tray and slides it into the oven (heat sparks its active ingredient, THC, through a process called decarboxylation), her husband Erik offers his theory as to why gourmet ganja has proved such a moneyspinner in these parts. “You eat it because it’s delicious, then you get the munchies and you want to eat more. It’s a never-ending cycle: you can get seriously fat on this diet.”

When Erik and I sit down to dinner (Catalano isn’t consuming any cannabis while pregnant), I begin to see his point. The seared scallops are served in a “super lemon haze, honey and apple cider vinaigrette”. It’s tangy and moreish. After a short while, I begin to feel a little heady, similar to the feeling after a glass of wine with a light meal. There is a noticeable rise in the mood around the table.

In this sense, cannabis is potentially the perfect ingredient for the restaurant business, but it’s hampered by one final hurdle: for the moment, Colorado state law does not allow its consumption on public property. Residents are sidestepping this by hosting “private events” in homes or closed restaurants (such as our cookery school in Denver); but Catalano, who has cooked for celebrities including Snoop Dogg, predicts we’ll see the first bona fide cannabis restaurant opening within the next “two to three years”.

From a chef's point of view, cannabis should be placed in the same bracket as basil, sage or rosemary

It’s hard to argue with that when you consider the fiscal benefit to the state. In the last tax year, Colorado collected $88.2m (£61m) revenue from cannabis sales, according to the Marijuana Enforcement Division’s annual report. Those figures included nearly 5m marijuana-infused edibles sold, not to mention some 70,000kg of plants. The Washington Post predicts that more than $1bn will be spent on cannabis in Colorado this year, generating nearly $100m in taxes. In a state made famous for its frenetic gold rush in the mid-19th century, the green rush is on.

Thirty-five-year-old chef Melissa Parks originally moved to Colorado so she could enjoy mountain climbing, but soon got involved with the gourmet cannabis scene, making beautiful cakes and desserts infused with weed. “Marijuana is a wonderfully versatile ingredient to cook with,” she says, while preparing a large batch of dainty, cannabis-infused vanilla tea cakes in her expansive kitchen. “You can put it into everything from icings to dressings. Every recipe that has a fat component to it, you can add cannabis-infused oil, butter or cream.

“For me, this whole thing is about exploration and food development. That’s how you improve as a chef: cooking with cannabis challenges me in ways I’d never expected.”

At the heart of that challenge, Parks explains, is the variety of cannabis strains available, which continue to evolve as expert growers improvise, cross-pollinate and perfect in order to service the culinary boom. “Different strains can have truly contradictory tastes: really bold and exciting flavours,” she says. “They can be salty, nutty, zesty or sweet, and everything in between.”

So how does Parks go about choosing her strains and matching them to dishes? “As a chef, I take cannabis as seriously as any other ingredient. That means you have to know and work with your supplier. I have a fish guy, a meat guy and a weed guy.”

One of the most popular “weed guys” in these parts is Nick Brown, whose company High Country Healing supplies a number of Colorado chefs with cannabis. Based in the heart of Silverthorne, Brown runs what might be described as a psychodelicatessen, with thousands of plants growing in carefully controlled rooms. “We’ve gone through 350 strains since we started, and now we’ve perfected it down to 50,” says the 32-year-old Princeton graduate, who has more than 30 staff on his payroll. “Every strain is grown differently, from the pH levels of their water to the type of fertiliser we use, the temperature, lighting, fans, even the music we play to them.

Brown takes me into the “flowering room”, a lush, luminescent jungle where huge Mesozoic-style marijuana plants sway gently to the beats of Warren G and Nate Dogg. “The foodies tend to gravitate towards fruitier strains like Tangerine Flo and Grape Ape,” he says, guiding me, Dr Livingstone-style, through his forest.

Brown left a successful career in property for this, and it seems he made a shrewd investment. Despite footing electricity bills of more than $20,000 a month for the hydroponic lights and industrial fans, business is buzzing. “We’re seeing 200 to 300 customers a day and it really is every walk of life. People just pour out of the cannabis closet when they come to Colorado.”

Several of his customers are entrepreneurs, such as Philip Wolf, who set upCultivating Spirits, offering private food and wine cannabis pairing evenings. Wolf, a very chilled 30-year-old Texan with a long, blond ponytail, describes his upscale soirees, which include a chauffeur-driven limo to and from his private restaurant for five-course meals, as “curated cannabis experiences”.

“Cannabis should be treated like fine wine,” Wolf says. “It harmonises so well with certain foods. Our pairing evenings aim to put cannabis consumption on a platform that middle America can understand. This is about education as much as enjoyment.”

Plenty of Brown’s other customers simply smoke his product, especially the popular death star (thus monikered because it makes you feel “like you might implode”), but many are also attempting the advanced recipes from books such as Catalano’s, which includes recipes for Sicilian somatic veal marsala and Indian kalichakra sweet carrot pudding. The cannabis cookery website herb.co, formerly The Stoner’s Cookbook, has five million page views a month. After three other states – Washington, Oregon and Alaska – followed Colorado’s lead in legalising the drug, the site’s chief executive, Matt Gray, predicted the edible marijuana industry will be worth as much as $40bn in the US within five years.

Could the UK benefit from decriminalising cannabis? The Liberal Democrats are currently calling for the legalised sale of marijuana through licensed outlets, backing a David Nutt study published in March. Experts say it could cut our national deficit by £600m, and after a public petition signed by more than 220,000 drew a three-hour parliamentary debate in October, there’s a building pressure for a change in policy.

But will it appeal to chefs in the UK? Mark Sargeant, a former British chef of the year, is unconvinced. “Maybe I’d consider infusing a little into some milk to make a chocolate ganache for some truffles, or a salted caramel and skunk truffle. But personally I don’t particularly like the effect of cannabis, so it won’t be on any of my menus any time soon,” he says. “Let’s be honest, who wants to feel stoned after a big meal?”

Meat and barbecue guru Neil Rankin is a little more enthusiastic. “I’ve never cooked with weed myself,” he says, “but marijuana’s pretty pungent stuff, so it could easily be used like a traditional herby ingredient – perhaps in a salad, much as you would rocket. You could also have it dried and ground, and the powder used as a seasoning for meat or fish, or in a curry. From a professional point of view, I’d probably only ever put it in a starter – then diners might order 10 courses each.” Back at the Denver cookery class, Roz and Rachel are busy scraping the remains of their “heavenly” cannabis creme brulees from the bottom of their ramekins. This morning’s self-cooked fare has included everything from infused pico de gallo to stir-fried chicken in a moreish Italian cannabis dressing, and the flan napolitano that Roz found so hilarious. The lesson is over and, feeling its effects, the pair decide to take a taxi back to their suite at the Ritz-Carlton. Steering her mother towards the door, Rachel posts pictures to social media. “The guys back in New York are going to love this,” she says. “It’s the ultimate hashtag.”