The Texas-based 5th U.S. Circuit Court of Appeals rejected claims by Associated Builders and Contractors Inc and a Texas chapter that the so-called "quickie" election rules violated employers' free speech rights and would lead to union harassment of workers. 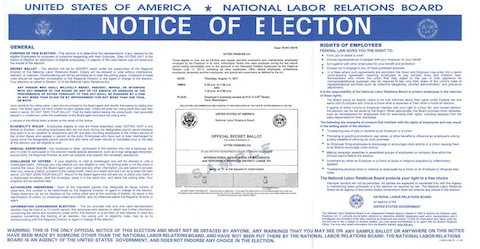 A U.S. appeals court on Friday dismissed a bid by construction trade groups to block controversial Obama administration rules designed to speed up union elections, saying the National Labor Relations Board had broad authority to implement them.

The Texas-based 5th U.S. Circuit Court of Appeals rejected claims by Associated Builders and Contractors Inc and a Texas chapter that the so-called "quickie" election rules violated employers' free speech rights and would lead to union harassment of workers.

"The board ... conducted an exhaustive and lengthy review of the issues, evidence and testimony, responded to contrary arguments, and offered factual and legal support for its final conclusions," Circuit Judge Edith Brown Clement wrote.

The 5th Circuit is considered to be one of the most conservative appeals courts in the country and is a popular venue for legal challenges to Obama administration initiatives.

The decision affirmed a 2015 ruling by a federal judge in Austin, Texas. The state's chapter of the National Federation of Independent Business was also a plaintiff but was not involved in the appeal.

The rules, which took effect in April 2015, have shortened the period between a union filing a petition to represent workers and an election, from the previous median of 38 days to as little as two weeks.

Under the rules, employers cannot bring legal challenges to the way union campaigns are conducted until after an election and are required to share workers' names and contact details with unions once they file election petitions.

The NLRB said the changes were necessary because a small number of companies were intentionally dragging out the election process, sometimes for months, to coerce workers to vote against unions.

Associated Builders and Contractors in its lawsuit said there was no evidence that was common, but the 5th Circuit on Friday said it was not the court's role "to weigh the evidence pro and con."

The U.S. Chamber of Commerce and other business-backed groups last year made similar claims in a separate lawsuit challenging the new rules in federal court in Washington, D.C. A judge dismissed the case, and the groups did not appeal.

President Barack Obama in March 2015 vetoed a measure from Republicans in Congress that would have stopped the rules from taking effect.

The case is Associated Builders and Contractors Inc v. National Labor Relations Board, 5th U.S. Circuit Court of Appeals No. 15-50497.