A thoughtful and nuanced look at the role identity played in this year's primary contest between Bernie Sanders and Hillary Clinton by a Sanders supporter. Hillary's passionate female (and male feminist) supporters are speaking with sincerity about their hopes for a gender revolution. The reality is that women work for less pay; do more childcare; are often single parents; must weather sexual harassment, abuse, and assault throughout their lives... 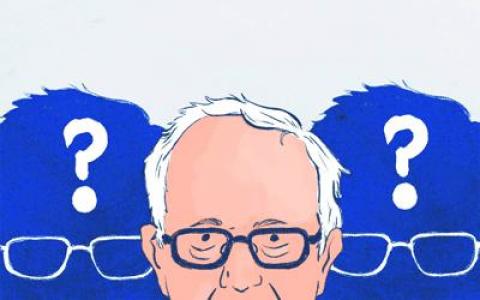 This election season has been a game changer for left strategies in the United States. Suddenly, radicals who had dismissed the electoral arena entirely as forever compromised by corporate power are rethinking the possibilities a national platform can provide. Despite facing down formidable odds, Bernie Sanders, an avowed socialist running a left-populist campaign, nearly closed the gap with his primary opponent, Hillary Clinton. Starting out more than 55 points behind Clinton just over a year ago, Sanders ended the primary season receiving 43 percent of the Democratic Party vote and 45 percent of the delegates and winning 22 states hands down. He had no trouble raising money, even without super PACs. Despite his age, his Jewish identity, his relative obscurity on the national stage before the campaign, his criticism of Israel and support for Palestinians and his persistent drumbeat of charges against the American religion of profit, Sanders came damned close to winning the nomination.

Sanders’ surge is a watershed moment that legitimized the concept of socialism in electoral politics. He boldly characterized capitalism and capitalists as the problem. The challenges facing the U.S. economy and the global climate would not be met by allying with Wall Street or corporations, he avowed, but by cutting back their power and influence. With this message, Sanders won the youth vote by overwhelming margins among youth of all colors.

Yet Clinton also represented a subversion of the status quo just by being a woman running seriously for the job of president. We might reasonably blame Sanders’ loss primarily on media bias and the party machinery, but the persistent theme of worry throughout the primary season was whether the old white guy from Vermont could stop the historic train of gender progress that Clinton’s election would symbolize.

When I knocked on doors in my Brooklyn neighborhood for Bernie, the problem for some people of color was not just that he was white, but that he was old: they had little positive experience with that generation of white people. And this was among mostly poor folks.

It seemed that identity politics was trumping class politics.

There once was a popular fairy tale about the demise of the last serious political revolution during the 1960s. In this story, the cause of failure was not sectarian bickering, or ultra-leftism, or the racism, sexism and heterosexism that undermined coalitions, or even the government’s eventual retreat from Vietnam. Rather, the real reason for defeat was (drumroll): identity politics. Todd Gitlin memorialized this as “the twilight of common dreams”: when separatism based on group identities defeated the New Left’s hope to inspire “an interracial movement of the poor.” Instead of keeping their eyes on the prize of class struggle, feminists, LGBT activists and varied constituencies of color split off and devolved into a reformist politics of representation.

The primary season we have just witnessed seems to be a repetition of Gitlin’s nightmare. Clinton’s campaign generated passionate support from many women of diverse races and classes. Pro-feminist men insisted on interpreting every overheated gesture of Sanders’ as a form of male privilege. Clinton’s “experience” was enough, they argued. It was time for a woman to win.

This is a feature of electoral politics the left needs to understand. There are two tracks, not one, that are worked on the stage of a major election. Track One is the agenda and policy proposals of the candidate, and these should be scoured to assess who they help, who they hurt and how much they challenge the 1 percent. Sanders won on this track hands down. But there is another track that motivates and animates voters. Track Two concerns the identity of the candidate. Are they a soccer mom or a rich industrialist, a mixed-race brainiac or a boot-wearing Texan? This is not just about veneers, but about trust, connection and the cultural politics of credibility and identification. It is the way we choose our partners, assess our doctors and respond to our teachers. It is the infrastructure of everyday interactions.

Leftists of Gitlin’s persuasion need to understand that identity matters. Candidates for high office are more than policymakers; they are also avatars, symbols of possibility, role models, punching bags and lightning rods who must negotiate public responses that sometimes have little to do with what they actually say or stand for.

Hillary’s passionate female (and male feminist) supporters are speaking with sincerity about their hopes for a gender revolution. The reality is that women work for less pay; do more childcare; are often single parents; must weather sexual harassment, abuse, and assault throughout their lives, and then are still demeaned if they wear more than a size 6.

Women are bullied and regularly threatened with rape on the internet, marginalized on late-night TV, cited less frequently in academia and put out to pasture in Hollywood at an age when male stars have decades of sex scenes to go. And we still have to contend with offensive stereotypes like the Sofia Vergara character on primetime TV and the Real Housewives franchise. Our graphic rape, murder and dismemberment is the normative plot line for “entertainment.” The visual culture in the United States skews skinny, light-skinned, attractive and young unless you are a white man with power, in which case neither your neck nor your waistline are issues.

Yet the track of identity needs to be applied to all aspects of a candidate. All white men are not the same in our current public culture. Sanders’ identity as a very specific sort of white guy, definitely non-elite, played well with his populist message. He’s old, but that generates less negatives for men than for women and inspires a certain amount of respect. He is also very visibly (and audibly) Jewish, aand his type of Brooklyn accent is rarely associated with the rich. Bernie is not a bland Midwesterner or Ivy League Northeasterner, but a working-class Polish Jew who grew up in a small rent-controlled apartment in Flatbush. He went to public schools, including CUNY, before he “made it” to the University of Chicago. And his longevity in politics established that this was no put-on: he has been wearing the same rumpled suits and talking vividly with his hands for 40 years of political life. Sanders’ identity generated credibility and connection for lots of people who feel marginalized by the style pages.

Meanwhile, Clinton’s unfavorability rating has stayed greater than 50 percent for the length of the campaign. (Sexism undoubtedly plays a role: 20 percent of voters still say they “are not ready” to vote for a woman, no matter how qualified.) Leftists who support Sanders should not toss her rating off as the result of a rational evaluation of Clinton’s policy and agenda, nor should they take advantage of the culture’s sexism to maneuver a class-based agenda into a better position.

Most important, Sanders supporters need to understand that identity makes a difference on the effects of class. A woman, a person of color, would not have been as likely to get into the University of Chicago in 1960 or be elected mayor of Burlington, Vermont, in 1981. Clinton recalls being harassed in the early 1970s as she was taking her LSATs, with guys asking her “who she thought she was.”

In this election, Clinton has depicted her campaign as a historic advance that will diminish the double standards by which female candidates are judged. Its promise is to help reduce the sexism that besets the lives, both public and private, of all women. This promise is not just tied to her policy proposals — though some of those do address gender issues — but to her ability to navigate gender-loaded criticisms of having “ruthless ambition” or a “bellowing laugh” or being “shrill.” The Ms. Blog, while not exactly an unbiased source on the election, offers a helpful set of questions to determine if your opposition to Hillary is sexist. Basically, if you hated Hillary first, and then looked for policy reasons to justify your dislike, you are probably sexist.

Clinton openly mobilizes via Track Two of identity and tries to revise its conventional mechanisms. She puts her pro-war militarism in the service of being a good grandmother and portrays herself as just a female version of the familiar underdog we should all root for. She knows that establishing her feminist credentials is not just about her policy agenda: Voters want to know if she is the kind of candidate who will go to the mat for these proposals, and understand fully what is at stake in getting them passed.

One of the main proposals Clinton has emphasized is paid family leave. Instead of unpaid leave for giving birth and the other work of caregiving that arises in family life, she says we should all have the right to 12 weeks of paid family and medical leave. This, while keeping the United States well below the standards of most industrialized countries, would be a paradigm shift. She has also argued that no family should have to pay more than 10 percent of its income on childcare expenses, which is again a modest proposal, yet one that would put hundreds of dollars a week into parents’ hands.

Clinton’s proposals are not better than Sanders’. But discussing their impact demands talking about class and the economy, not simply about identity politics or the special interests of separate groups. That is vital to the ability of working-class people to stay afloat. Mayor Bill de Blasio’s universal free pre-K program has made the year before kindergarten a vastly reduced economic burden on working parents. It has provided an economic stimulus for the city, improved the likelihood of poor children’s later school success and helped parents avoid wage loss and attain better paying jobs.

Yet if family leave is a class issue, it is also true that war is an identity issue, decimating poor families here and abroad and hijacking the feminist agitation around gender justice for an imperial cause. Leftists have to come to a better understanding of the interpenetration of issues and tracks. It is not the case that an “interracial movement of the poor” can ignore our separate challenges.

Hillary’s continued support for her husband’s decision to dismantle welfare as we knew it belies the sincerity of her promises to work hard for working-class women. For the first 15 years after welfare was razed, the rates of extreme poverty doubled, mostly on the backs of single mothers.

This is what happens when you make a budget proposal — such as paid family leave — without addressing the causes of our increasing rates of poverty. Here is where the difference between Sanders and Clinton becomes clear: more than policy, it’s about political orientation. The next time around, the left needs to push the plan to curb capitalism with a better understanding of the ways in which identity intersects with class. A broad, interracial movement for justice depends on it.

[Linda Martín Alcoff is a professor of philosophy at the City University of New York and is the author of The Future of Whiteness (Polity Press, 2015).]

The Indypendent is a monthly New York City-based newspaper and website. Subscribe to our print edition here. You can make a donation or become a monthly sustainer here.

Many thanks to The Indypendent for sending this article to Portside.