There is a reason why 70 percent of black teenagers, like those who died in Shreveport, and 60 percent of Hispanic teenagers can’t swim. But it isn’t due to some genetic disorder, as some actually believe. It is because of abject irrational racism and Jim Crow and its vestiges. 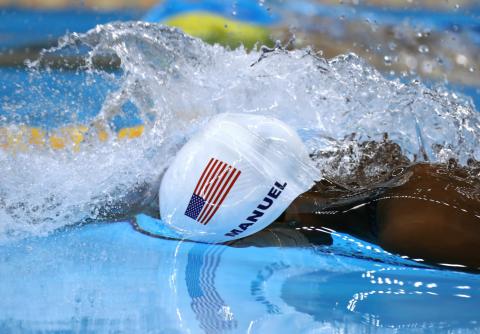 Simone Manuel competes in the women's 50-meter heat at the 2016 Olympics on Friday.,Al Bello/Getty Images

SANDBRIDGE, Va. — Down a gentle slope of sand the color of brown sugar, our little daughter frolicked Thursday afternoon in the ocean’s froth under a canopy of blue sky. I was 25 yards away, camped under a large orange umbrella. Her ever-watchful mom was farther, across the road at the house.

Our kindergartner was all but alone on the roaring sea’s edge. And we felt safe.

She began learning as an infant in the same YMCA pool where I earned my lifeguard certificate as a teenager. She continues to take lessons there, and at the University of Maryland. And she splashes for fun, practicing streamlining — arms outstretched, hands touching, head down — at a swim club we joined in suburban Maryland, despite my early protestation.

I was born in Washington, D.C., and reared in Petworth and Chillum. Her mom is from Lagos and reared in The Hague. Mom knew nothing of the history of public swimming pools for black people in this country, the racial fear that spread to make what became for a time all-white suburban swim clubs, like the one she’d found for us to join, while drying up pools in city neighborhoods that white residents fled as black people trickled in.

But as we sat on the edge of our seats with friends, black and white, Thursday night in front of a large TV screen cheering Simone Manuel as she surprisingly became the first black woman from this country to win an individual Olympic swimming medal — gold, at that — we all revisited that past which haunts black people — and chillingly — still. As I tweeted in the moment Thursday night: “If you know how Jim Crow metastasized in America’s pools, you know how significant #SimoneManuel’s gold medal is #Rio2016 #blackhistory”

There is a reason the Centers for Disease Control found in 2014 that black progeny between the age of our daughter, 5, and that of Manuel, who turned 20 just before the Rio Games commenced, drown in swimming pools at a rate greater than five times that of white children and teens.

There is a reason that we hear from time to time of tragic stories like that which rocked Shreveport, La., a few years ago, when six black teenagers drowned in a river trying to save another with them who slipped into the water.

There is a reason why 70 percent of black teenagers, like those who died in Shreveport, and 60 percent of Hispanic teenagers can’t swim.

But it isn’t due to some genetic disorder, as some actually believe. It is because of abject irrational racism and Jim Crow and its vestiges.

It is rooted in complete ignorance that somehow the melanin from our skin could wash off, contaminate the water and infect any whites nearby. It is anchored to this country’s historical racial sexual hysteria, an unfounded fear of placing less-clad white women in too-close and contained proximity with black men considered innately lascivious, particularly when it comes to white women.

It can be heard in the scream of the segregationist Sen. Strom Thurmond of South Carolina in 1948: “I want to tell you, ladies and gentlemen, that there’s not enough troops in the army to force the southern people to break down segregation and admit the nigger race into our theatres into our swimming pools into our homes and into our churches.” Thurmond’s name now adorns the University of South Carolina Wellness and Fitness Center, for all students, faculty and staff.

It can be seen in the infamous mid-1960s photo of a motel manager in Florida pretending to dump acid into the property’s pool as black occupants took advantage of newly passed public accommodation laws.

With the passage of civil rights laws in the early ’60s, public pools in the South closed rather than integrate. Public pools in the North were drained of government funding that once kept them well maintained. For example, Banneker Pool on Georgia Avenue across from Howard University never looked as good when I was growing up and using it as it does now that the surrounding neighborhood has undergone gentrification and displaced longtime black residents, even in my father’s childhood neighborhood LeDroit Park on the other side of the college.

In 2008, when Jeff Wiltse’s book, “Contested Waters: A Social History of Swimming Pools in America,” came out, Wiltse told NPR: “During the 1920s, ’30s and ’40s. . . pools were a very high public priority. Right now, they’re not, and so most people who want to gain access to swimming pools have to gain access to private pools. And so that clearly is — works to the advantage, or enables, middle- and upper-class Americans . . .

“So relatively poor people, especially people living in large inner cities, have much less access to swimming pools than Americans have at any time during the last, say, hundred years.”

Through tears of joy, Simone Manuel told her NBC interviewer Thursday night that she wanted to thank those like her who came before her. She mentioned Maritza Correia, who in 2004 made history as the first black woman to earn a place on the U.S. Olympic swim team won a silver medal in the 400-meter freestyle relay.

Manuel’s list was short. Now you understand the reason why.

Kevin B. Blackistone is an ESPN panelist and visiting professor at the Philip Merrill College of Journalism at the University of Maryland.  He writes sports commentary for the Washington Post.