The people who are camped at Standing Rock are giving President Obama the opportunity to show how a managed decline in the use of fossil fuels is possible. And, if done right, inspiring. As the president said, “This gives us the best possible shot to save the one planet we’ve got.” 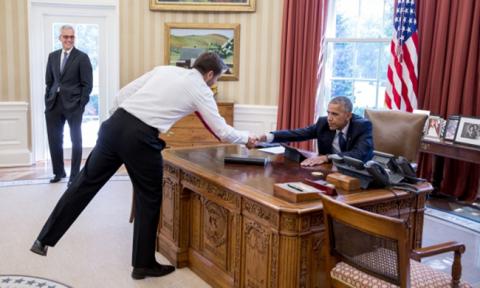 Ten months ago, the United States told the world it was ready to do something about climate change. Enough talk. Time to act. And because of the nature of the crisis, the world’s governments are moving quickly (well, at least as measured by governments). On Wednesday, President Barack Obama announced the global agreement from the Paris talks will begin implementation on November 4 after being ratified by European nations.

“Today, the world meets the moment. And if we follow through on the commitments that this agreement embodies, history may well judge it as a turning point for our planet,” the president said.

The Paris agreement formally begins four days before the U.S. presidential election, in which Republican Donald Trump opposes that agreement as well as its science while Democrat Hillary Clinton strongly supports it.

“Now, the Paris Agreement alone will not solve the climate crisis. Even if we meet every target embodied in the agreement, we’ll only get to part of where we need to go,” the President said. But make no mistake, this agreement will help delay or avoid some of the worst consequences of climate change. It will help other nations ratchet down their dangerous carbon emissions over time and set bolder targets as technology advances, all under a strong system of transparency that allows each nation to evaluate the progress of all other nations. And by sending a signal that this is going to be our future—a clean energy future—it opens up the floodgates for businesses and scientists and engineers to unleash high-tech, low-carbon investment and innovation at a scale that we’ve never seen before. So this gives us the best possible shot to save the one planet we’ve got.”

The test of those words is found at Standing Rock.

If the president, the government, the world really believe that the agreement will only get us part of where we need to go to avoid the worst consequences of climate change, then stopping the Dakota Access pipeline is essential.

“This gives us the best possible shot to save the one planet we’ve got.”

A recent report by Oil Change International and a consortium of environmental organizations calls for a “managed decline of fossil fuel production.” The logic is simple math. The study measures potential carbon emissions from “where the wells are already drilled, the pits dug, and the pipelines, processing facilities, railways, and export terminals constructed.” Add those numbers up, and “the potential carbon emissions from the oil, gas, and coal in the world’s currently operating fields and mines would take us beyond 2 degrees Celsius of warming.”

In other words: “Keep It in the Ground” is not just a slogan but the answer to the math question, “How does the world meet its target of limiting global warming to 2 degrees?” Remember— and this is important—2 degrees Celsius is supposed to be the upper limit. The Paris agreement calls for nations to work toward a limit of 1.5 degrees Celsius warming, a much more difficult goal.

“Scientists say that to have even a two-thirds chance of staying below a global increase of 2 degrees Celsius, we can release 800 gigatons more CO2 into the atmosphere,” writes Bill McKibben in The New Republic. “But the Rystad data shows coal mines and oil and gas wells currently in operation worldwide contain 942 gigatons worth of CO2. So the math problem is simple, and it goes like this: 942 > 800.” That’s just to hit the 2 degree target. To reach the more difficult stretch goal? McKibben says, “To have even a 50–50 chance of meeting that goal, we can only release about 353 gigatons more CO2. So let’s do the math again: 942 > 353.”

Dakota Access pipeline represents our past and a mistake.

As challenging as that number is, it does not mean giving up fossil fuels immediately. (One of the first dismissals of what was occurring at Standing Rock was by industry supporters who said, “Oh, but they drive cars and trucks there …”) The Oil Change International report states: “This does not mean stopping using all fossil fuels overnight. Governments and companies should conduct a managed decline of the fossil fuel industry and ensure a just transition for the workers and communities that depend on it.”

That’s really the key in North Dakota—and beyond. The transition begins by saying that Dakota Access pipeline represents our past and a mistake. And as part of a managed decline, major fossil fuel infrastructure projects like this pipeline—are no more.

But what about the jobs the pipeline construction would bring? What will this do to North Dakota? Actually, it could be a great thing.

Data from Stanford researchers shows that the transition to clean energy could happen faster than projected—and benefit any state almost immediately. The Solutions Project says that, in North Dakota, a transformation toward clean energy “pays for itself in as little as two years from air pollution and climate cost savings alone.” Two years? Imagine all the intellectual activity, the construction, the jobs, the fresh investment that would come together to make that so. It would be mind-blowing. The Stanford data says such a transition would create 8,574 permanent operations jobs and 21,744 construction jobs.

The transition to clean energy could happen faster than projected.

On Wednesday, the White House listed out its accomplishments on climate change, a couple of pages: investments in clean energy, new pollution rules, car standards, and generally creative thinking. But there was no plan for a managed decline. There was no math behind the numbers.

This global challenge, the data of climate change, adds up to one thing: Standing Rock is a test.

The United States cannot meet its obligations to the world if it continues business as usual. It’s just not possible; the math of carbon emissions cannot be wished away. The people who are camped at Standing Rock are giving President Obama the opportunity to show how a managed decline is possible. And, if done right, inspiring. As the president said, “This gives us the best possible shot to save the one planet we’ve got.”

Mark Trahant originally wrote this article for Trahant Reports. It has been edited for YES! Magazine. Mark Trahant is an independent journalist and a journalism professor at the University of North Dakota. He's a member of the Shoshone-Bannock tribes and has written about American Indian and Alaska Native issues for more than three decades. His most recent project, TrahantReports, covers the 2016 election with a focus on Native issues and candidates. Follow him on Twitter at @TrahantReports.