“Left-wing populism” makes clear that boundaries that create and represent identities do not run between people of different geographical origin, but among those at the bottom and at the top of society. This is a useful and appropriate populism. It has nothing to do with right-wing populism: the Others on the other side of the fence are not foreigners, but the richest 10 percent of society. 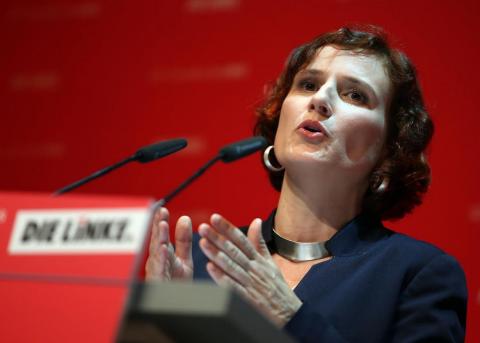 Katja Kipping, the co-secretary of Linke, reflects on the German racism that’s always been there and how the left has fought back.,
The elections last month in Berlin last month showcased the paradoxical situation in Germany today. The rise of the anti-refugee right party Alternative for Germany (AfD) makes conceivable what was not imaginable a few years ago: an alliance of the left-wing parties leading the government. Katja Kipping, 38-year-old co-secretary of the Linke, is committed to making that possibility a reality.

Secretary, first of all, can you explain the success of AfD across the country?There are several factors. First, nationalism and racism are deeply rooted in a sector of the German population. Second, even if poverty is not an excuse for the racists, it must be said that neoliberalism has prepared the ground for right-wing populism, impoverishing large sections of society. And third, AfD has been reinforced by the behavior of the government of Angela Merkel, who has increasingly accepted its claims by tightening up the reception policies. She did it thinking that it would weaken AfD. The contrary happened.

How does Linke try to counter the right?
We maintain a clear stand against racism and we try to give strength to the field of solidarity, to those who help the refugees. But this is not all: We are committed to highlighting AfD’s positions in social and economic policy, which are not favorable to the working classes. More generally, we try not to be paralyzed in the face of right-wing populists, but to go on the offensive, leading the public debate to the social security issue: This is the only way they can be embarrassed.

In September of next year there will be elections in Germany: In order to win more support on the left, do you need “populism” on your side?
At this time in the country, indignation rightly reigns: The government favors the increase of inequality and undermines social cohesion. People increasingly fear a regression in the social scale.

If “left-wing populism” means to make clear that the boundaries that create and represent the identities do not run between people of different geographical origin, but among those at the bottom and those at the top of society, then it is a useful and appropriate populism. It has nothing to do with right-wing populism: the Others on the other side of the fence are not foreigners, but the richest 10 percent of society.

And maybe the SPD chancellor won’t launch as a candidate secretary Sigmar Gabriel, Minister of Industry and a deputy of Merkel, in the large coalition?
I think the attractiveness of a political option does not depend on individual members. To build consensus to reach a majority different from the one we currently have, we must focus on the content, and make it clear which direction we want to take on substantive issues. For example, do we want to continue to have a differentiated health service depending on people’s spending power? Should we keep the support system to income according to Hartz IV regulations, which is full of vexations for the unemployed? Should we go ahead with the militarization of foreign policy? From these questions, we must develop the debate around a possible new leftist majority.

So for Linke, it is not important who the SPD nominates for chancellor…
It’s a question that does not matter to us. Each party is campaigning for itself, and we care about the contents [of their platform], especially the ones that allow us to attract abstainers to vote.

Europe is of course a decisive chapter. Last month, the Linke parliamentary group organized an international conference where again two lines emerged: the proponents of the so-called “Lexit” and those that we may call “critical defenders” of the E.U. Is it possible to build a common perspective or is the left, both in Germany and in the rest of the continent, destined to remain divided?
We want a fresh start for the E.U. The alternative between the defense of the E.U. as it currently stands and the return to the national dimension is mortal for the left. It is like choosing between the plague and cholera. The debate cannot focus on what is the lesser evil.

But there are unavoidable issues: Must we leave the euro behind, as recently suggested again by Joseph Stiglitz?
The problem is not the currency, but the political direction. We must fight neoliberalism, not a currency itself. Focusing on the currency de-politicized the discussion, because it remains the domain of the experts.

We must instead politicize the debate on Europe, that is, fighting against austerity, not against the euro. The case of Greece shows us that, as long as Merkel and Schäuble drive the ball, it will be difficult to change Europe’s course: then, the turning point must begin with a change of government in Germany.

In your opinion, does the orientation of the German trade union have to change, too? Often it has been an ally of the government.
It is obvious that you cannot foment exports to other countries and then complain if these countries get into debt. I hope that the ETUC, the European Trade Union Confederation, gets stronger and stronger and that adequate social protection standards are implemented in all the states of the E.U. I must say that, in regards to the German trade union, I was very disappointed by the political cover the leaders of the unitary confederation DGB gave to Vice Chancellor Gabriel for the signing of CETA, the E.U.-Canada trade agreement.

You have been leading Linke for over four years, together with Bernd Riexinger. You succeeded in uniting and strengthening a party that was on the verge of split between moderates and radicals. The left is now no longer relegated to the margins of German politics. What is the secret of your success?
Linke is a plural organization where differences are not denied, but we try to enhance the points in common. This applies both to our internal processes and toward the social movements, which we feel ourselves organically part of. We seek to pursue a “realist and revolutionary” policy, as Rosa Luxemburg said: We fight for every little concrete change that we frame, however, in a broader perspective that allows us to say that capitalism is not the end of history. We are comforted to see that we are growing a lot among young people. We owe it to the fact that we focus on the link between civil rights and social rights, between individual freedom and equality, and to our firm stand against racism.