How Do I Tell My Daughter that America Elected a Racist, Sexist Bully?

My six-year-old fell asleep thinking Hillary Clinton would be the first female president. Now I have to explain to her why Donald Trump was chosen instead. The truth is that this shameful election result was backlash, pure and simple - a reaction to women's growing rights, racial progress and a cultural shift that no longer centers straight white men. 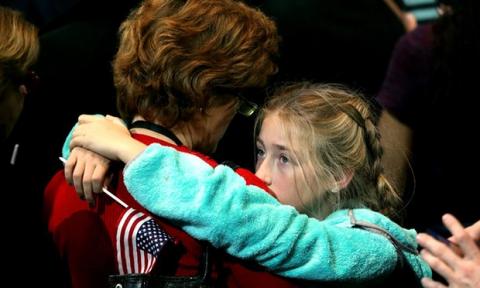 A girl hugs a woman as she watches voting results last night at the Jacob K Javits Convention Center, where Hillary Clinton held her election night event., Photograph: John Moore/Getty Images // The Guardian
Last night, seated between my 68-year-old mother and six-year-old daughter, I expected to watch the first woman get elected president of the United States. We bought champagne and cake, and promised Layla that she could stay up as late as she wanted to watch. My daughter fell asleep on the couch, still wearing a shirt emblazoned with the word "feminist" and an "I voted" sticker.
This morning, I'll have to tell Layla that Hillary Clinton lost, that a woman won't be president. Even more difficult, I'll have to tell her that Donald Trump won. The man she knows as a bully who says terrible things about women, people with disabilities and immigrants - the man who brags about hurting people and separating families - will lead her nation.
Last night my heart broke for my country, this morning it breaks for her.
She woke up in a changed America today - one where a liar and a racist, a xenophobe and a serial harasser of women, will lead us. She woke up in a place that flatly rejected progress, a country where a man can admit to sexually assaulting women and win millions of votes because, not in spite, of it.
I have always been worried about the things I will pass down to my daughter; the burdens she inherits simply by living in a sexist world are the things I fear the most.
How will I explain to her about how many women have been hurt, badly, because of the sexism that surrounds them? How I will I keep her from being afraid that her fate to suffer the same is inevitable? 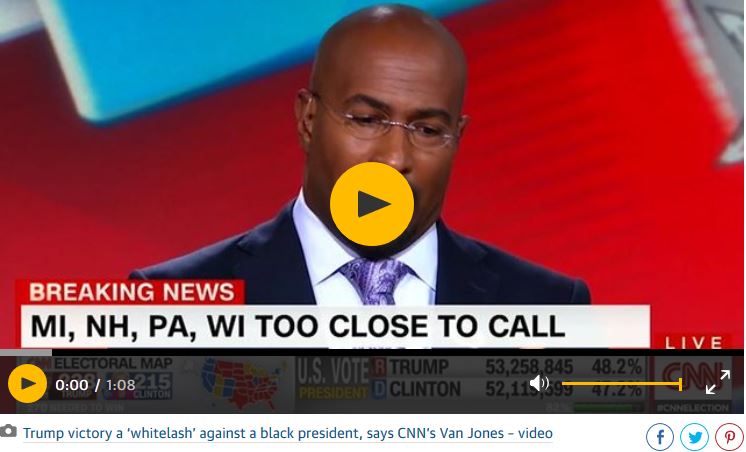 Some of the most powerful words ever spoken. Van Jones on CNN on election night 2016. We must stand together.
Listen here.
My mother got married when she was 17 and grew up during a time when birth control was illegal; she would be in her 20s before she could apply for credit without a man co-signing her application. I was born in 1978, five years after abortion was legalized. I was in high school when marital rape was finally outlawed.
I used to take solace in the idea that things were getting better. Things would be different for my daughter. I don't have that hope any more. Not today, anyway.
Last night we let Layla sleep in our bed - more a comfort for us then her, I think. And before I closed my eyes I whispered to her that I was sorry. I was so very sorry, because I underestimated how sexist and racist this country really is. I let the powerful feminist moment of the last few years trick me into believing things had changed.
It was a seductive lie, but still so very false.
The truth is that this shameful election result was backlash, pure and simple - a reaction to women's growing rights, racial progress and a cultural shift that no longer centers straight white men. They were votes based on fear, bigotry and ugliness.
There is no sugar-coating that reality. Not even for my six year-old.
I know that I'll find the right words to relay the gravity of the election to my daughter without scaring her. I have confidence in that. Her father and I will tell her that sometimes people make bad decisions, and that the wrong people are chosen to lead. We'll remind her of lessons she's learned in school about times in her country's history when we've done the wrong thing - horrible things. We'll remind her of how good people organized and fought, loved each other and believed things could change.
We'll tell her that we will have to be the good people who fight now. And soon, when we've had a chance to grieve and gather ourselves, we'll remind our daughter that part of the reason this man was elected is because of how powerful we actually are. That our power scared him and others who are not ready to change and grow.
And that we owe it to ourselves and our country not to let fear stop us now. Not ever.
[Jessica Valenti is a columnist and staff writer for Guardian US. She is the author of four books on feminism, politics and culture, and founder of Feministing.com.Her newest book, Sex Object, will be out in 2016. You can find her on Twitter, Tumblr and Facebook.]