Why Okinawa Matters: Japan, the United States and the Colonial Past

Here is a critical discussion of Okinawa’s role in serving American and Japanese strategic interests. The interplay of overseas bases and U.S. foreign policy is a crucial dimension of the global projection of American power. This essay offers reflections on this reality, as well as the linkage between the network of foreign military bases and the emergence of the first global state in history, a new political phenomenon that distinguishes it from ‘empires' of the past. 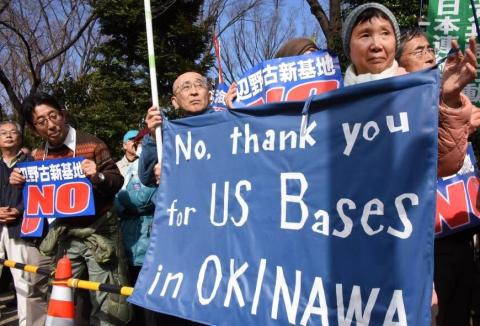 When President Barack Obama visited Hiroshima in May of 2016 there was an effort to persuade him to put Okinawa on his travel itinerary, but as has happened frequently throughout the long tortured history of Okinawa, the request was ignored. In an important sense, Okinawa is the most shameful legacy of Japan’s defeat in World War II, exceeding even the sites of the atomic attacks by its daily reminders of a continued colonialist encroachment on Okinawan national dignity and wellbeing.

Okinawa is being victimized by overlapping exploitations with that of the United States reinforced and legitimized by mainland Japan since the reversion of Okinawa to Japanese rule in 1972. For the United States Okinawa serves as a hub for its strategic military operations throughout the Pacific, with 32 military bases on the Ryukyu Islands including more than 20 on the main island of Okinawa. The Okinawa bases occupy about 20% of the island, with Kadena Air Base having been used for B-29 bombing missions during the Korean War more than a half century ago and the island serving as a major staging area throughout the Vietnam War. It was also a secret site for the deployment of as many as 1,000 nuclear warheads as acknowledged by the US decades later together with the claim that the nuclear warheads were removed prior to the reversion of Okinawa to Japanese rule in 1972. In recent years Okinawa rarely receives global news coverage except when a sex crime by American servicemen provokes local outrage and peaceful mass demonstrations followed by the strained apologies of local American military commanders.

After a series of military incursions, Japan finally conquered Okinawa and the Ryukyu island chain of which it is a part in 1879, and then imposed its rule in ways that suppressed the culture, traditions, and even the languages of the native populations of the islands. What is little remembered in the West is that Okinawa was the scene of the culminating catastrophic land battle between the United States and Japan in the spring of 1945 that resulted in the death of an astounding one-quarter to one-third of the island’s civilian population of then 400,000, and its subsequent harsh military administration by the United States for the next 27 years until the island was finally turned back to Japan with the US military presence intact. Despite an estimated 60-80% of Okinawans being opposed to the U.S. bases, figures confirmed by the recent election of a governor and Diet members from the prefecture united in opposition to plans for the construction of a new base at Henoko in Northern Okinawa, the government in Tokyo, currently headed by a dangerous militarist, Abe Shinzo, is comfortable with the status quo, which situates most of the unpopular American military presence outside of mainland Japan, hence not a serious political irritant to the majority population.

The plight of Okinawans exemplifies the tragic ordeal of a small island society, which because of its small population and size, entrapment within Japan, and geopolitical significance, was excluded from the decolonizing agenda that was pursued around the world with considerable success in the last half of the 20thcentury. This tragic fate that has befallen Okinawa and its people leaves it a ‘colony’ in a post-colonial era, a fate shared with Micronesia.Its small current population (1.4 million) combined with its position as a Japanese prefecture and its continuing role in pursuing the Asian strategic interests of the United States, as well as joint military operations with Japan, make it captive of a US-Japan relationship in which both parties refuse to acknowledge the supposedly inalienable right of self-determination, an entitlement of all peoples according to common Article 1 of both human rights covenants. In this respect Okinawa, from a global perspective, is a forgotten remnant of the colonial past, which means it is subjugated and irrelevant from the perspective of a state-centric world order. In this respect, it bears a kinship with such other forgotten peoples as those living in Kashmir, Chechnya, Xinjiang, Tibet, Hawaii, Puerto Rico, Palau, Marianas Islands, among many others, as well as among such minorities in the United States as native Americans, Hispanics, African Americans, and, of course, Muslims.

To raise questions about the future of Okinawa is to come face to face with the role and responsibility of global civil society. The Palestinian goals appear to remain more ambitious than those of most Okinawans, although such an impression could be misleading. The Palestinian movement is centered upon realizing the right of self-determination, which means at the very least an end to occupation and a diplomacy that achieves a comprehensive, sustainable, and just peace. For Okinawans, integrated into the Japanese state since 1879 and again since 1972, earlier dreams of independence seem to have faded, and the focus of political energy is currently devoted to the anti-bases campaign, in particular to preventing the expansion of US bases anywhere in Okinawa. Taking moral globalization seriously means conceiving of citizenship as borderless with respect to space and time, an overall identity I have described elsewhere under the label ‘citizen pilgrim,’ someone or some group on a life journey to build a better future by addressing the injustices of the present wherever encountered.

In this respect, acting as citizen pilgrims means giving attention to injustices that the world as a whole treats as invisible except when an awkward incident of lethal abuse occurs. Okinawa has been effectively swept under the dual rugs of statism (Okinawa is part of the sovereign state of Japan) and geopolitics (Okinawa offers the United States indispensable military bases), and even the Japanese peace movement may have grown fatigued and distracted, being currently especially preoccupied with its opposition to the revival of Japanese militarism under Abe’s leadership, although the anti-base movement on Okinawa has always been primarily an Okinawan movement, with mainland involvement more pronounced at some times than others. Whether attention to the plight of Okinawa will give rise to false hopes is a concern, but the aspiration is to produce an empowering recognition throughout the world that for some peoples the struggle against colonialism remains a present reality rather than a heroic memory that can be annually celebrated as an independence-day holiday. Until we in the United States stand in active solidarity with such victims of colonialist governance in which we play a crucial role through the hegemonic position of military bases on the island, we will never know whether more can be done to improve prospects of their emancipation. This awareness and allegiance is the very least that we can do if we are to act in the spirit of a citizen pilgrimage.

An earlier version of this article appeared in Japanese in the Okinawan newspaper,Ryukyu Shimpo on August 22, 2016.