It is not too late for President Obama to grant clemency to Leonard Peltier, imprisoned for past forty years. Peltier was a member of the American Indian Movement (AIM), which promotes Native American rights. In 1975, during a confrontation involving AIM members, two FBI agents were shot dead. Peltier was convicted of their murders, but has always denied killing the agents. The judge who authored the decision denying a new trial, has since voiced support for his release.

Leonard Peltier, Amnesty International
Amnesty International USA Urges President Obama to Grant Clemency to Leonard Peltier With New Advocacy Video
To mark his 72nd birthday today [September 12, 2016], Amnesty International USA (AIUSA) released a new video urging President Obama to grant clemency to Anishinabe-Lakota Native American activist Leonard Peltier before leaving office. The video highlights Amnesty International's human rights concerns about Peltier's case and is narrated by actor Peter Coyote. Amnesty International has joined Indigenous activists, human and civil rights groups, and Peltier's family and friends to call for his release.
The full video is at: https://www.youtube.com/watch?v=QAx2djDvrCU
Peltier has been imprisoned for 40 years serving two consecutive life sentences, despite the fact that the legal processes surrounding his extradition, conviction, and post-conviction have been riddled with flaws. Amnesty International and legal experts who have studied the case have raised serious concerns about his conviction. In the years since, Peltier has repeatedly been denied parole and exhausted all of this legal remedies, despite evidence of coerced testimony and withholding of key ballistics evidence at trial. Peltier is now 72 years old and in poor health.
"The moment for action is decades overdue in this case. Leonard Peltier is 72 and in failing health. As President Obama approaches his last few months in office and continues to announce record-breaking numbers of commutations, it is crucial that he grant Leonard Peltier clemency. Despite the political factors which may have influenced the way the case was prosecuted, Leonard Peltier has remained in prison all these years. He is not eligible for parole again until 2024," said Zeke Johnson, Managing Director, Individuals at Risk program. "President Obama now has the opportunity to bring some measure of closure to a case that has troubled many people for decades."
When arrested, Peltier was a leading member of the American Indian Movement (AIM), an activist group involved in promoting the rights of Indigenous people during a period of intense conflict in the 1970s. In 1975, during a confrontation involving AIM members, two FBI agents were shot dead. In the two years prior to the confrontation in which the two FBI agents were killed, more than 60 Native Americans on the Pine Ridge reservation had been killed - allegedly by paramilitary squads connected to the tribal government - without anyone being brought to justice for these crimes.
Amnesty International USA has chosen Peltier's case as one of 12 cases for the organization's annual Write for Rights event, the world's largest human rights letter writing event. Every year, culminating around Human Rights Day on December 10th, Amnesty International organizes hundreds of thousands of people worldwide to write letters on behalf of people at risk of human rights violations.
Take Action - Sign Here for President Obama to Grant Clemency to Leonard Peltier 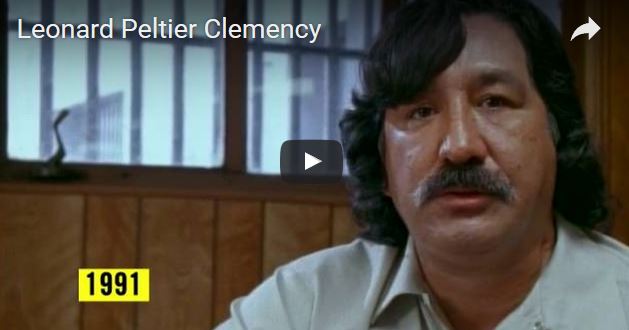 Listen here.
Your Message
Message Recipients: Barack Obama - President, Robert A. Zauzmer - Acting US Pardon Attorney
Subject: Free Leonard Peltier
I am writing to urge you to grant Leonard Peltier's application for clemency on humanitarian grounds and in the interests of justice.
I acknowledge that Leonard Peltier was convicted of a serious crime. I have tremendous sympathy for the relatives of Ronald Williams and Jack Coler. They have the right to justice.
I also share Amnesty International's serious concerns about the fairness of the proceedings leading to Leonard Peltier's trial and the evidence on which his conviction was based. Parole examiners have thus far failed to take account of the mitigating factors in the case.
Amnesty is concerned about coercion of an alleged eye-witness who said she had seen Leonard Peltier shoot the agents, but who later retracted her testimony, and who was not allowed to be called as a defense witness at his trial. Amnesty has further concerns about the evidence linking Leonard Peltier to the shootings as well as the prosecution's withholding of evidence that might have assisted Leonard Peltier's defense, including potentially key ballistics evidence.
Given that all available remedies have been exhausted; that Leonard Peltier's next parole hearing is scheduled for 2024; and that Leonard Peltier has spent 40 years in prison, the interests of justice would best be served by releasing Leonard Peltier from prison.
I am also very concerned by reports of Leonard Peltier's deteriorating health. I urge you to ensure that he is given access to appropriate medical treatment and is moved to a facility that can address his medical needs as a matter of urgency until he is granted release.
Sign here.
Quick Facts - Case Of Leonard Peltier
[Michael Kuzma is an attorney based in Buffalo, New York, and a member of Leonard Peltier's Legal Team. Since 2001, he has been spearheading efforts to secure files under the Freedom of Information Act (FOIA) from the FBI relating to Leonard Peltier and the RESMURS investigation.
This site was developed to ensure that those involved in the struggle to gain Leonard Peltier's liberation from prison have a place to which they may turn for the most current and accurate information relating to the case.]
Subscribe to Portside