Ultraconservative politics are bullying the state government, but there is hope in the numbers being rallied to the cause. Donald Trump's triumph across the South and Midwest, which won him the Electoral College and the White House, did not extend to Governor Pat McCrory in my home state of North Carolina. 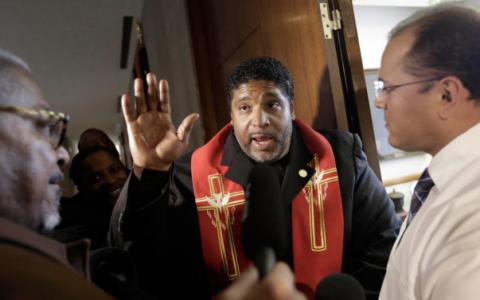 Rev. William Barber, center, argues his right to enter the House Speaker's office at the North Carolina General Assembly in Raleigh, N.C., photo credit: AP / Gerry Broome // Ebony
After fighting his loss with false accusations of voter fraud, McCrory finally conceded in early December, becoming the only incumbent GOP governor in America to lose reelection. But partisan extremists in the North Carolina legislature called a special session last week to strip power from McCrory's opponent, Democrat Roy Cooper.
This power grab and our "Moral Mondays" protest against it made national headlines, eliciting warnings that we may be witnessing a preview of the coming Trump years. But many have missed the significance of what's happening here in North Carolina and what it shows the nation about the potential for a moral movement to revive the heart of democracy in America.
Some observers credited McCrory's defeat to his championing of the unpopular HB2 "bathroom bill," which effectively banned transgender people from public restrooms, as well as attacking all working people in its less publicized sections. Our partners with Equality North Carolina, Southerners on New Ground, and the Human Rights Campaign spearheaded a corporate boycott, in which the NBA, the NCAA, Google, Bank of America, IBM, Apple and dozens of other corporations refused to do more business in North Carolina until HB2 was repealed. This cost the state hundreds of millions of dollars in commerce and let the nation know how backward our state government had become.
But the HB2 battle does not tell the whole story. Public Policy Polling recently did a chronological study of poll data that traces McCrory's fall from one of our most popular governors to becoming "One-Term Pat." Their detailed analysis reveals how "the seeds of McCrory's defeat were planted by the Moral Monday movement in the summer of 2013, just months after McCrory took office."
Power 100 Honorees: Rev. William J. Barber II
In fall of 2012, Pat McCrory entered office with favorable ratings as high as 65 percent; 25 percent of Democrats cast their ballots for him. McCrory marketed himself as a pro-business moderate and pledged not to sign any more restrictions on abortion. He won by 12 points while GOP presidential candidate Mitt Romney barely eked out a two-point victory in North Carolina.
But McCrory quickly proved that he could not rule as a moderate. Instead he joined forces with the hard-right extremists that had taken control of the legislature in 2010 and 2012. When they first got into office, they gerrymandered the state's legislative districts along racial lines, "stacking and packing" Black voters, which allowed Tea Party conservatives to sweep in an extremist super-majority in 2012. The 2012 races for U.S. House of Representatives in North Carolina's 13 new districts illustrate how outrageous the gerrymandering became: Democrats polled 81,190 votes more than the GOP candidates but ended up with four seats to the Republicans' nine.
With a radical-right supermajority, McCrory ratified a raft of mean-spirited measures that Ohio's Republican Governor John Kasich branded "a war on the poor." They re-wrote our state's tax code, slashed unemployment benefits, denied Medicaid expansion, attacked public education, ran rough-shod over equal protection guarantees and then, to top it off, passed the worst voter suppression bill in the nation.
But they did not get away with it. In 2013 "Moral Mondays" emerged as the voice of a large and growing moral movement to resist the travesty of a state government at war with its people, especially the most poor and vulnerable. Week after week we came, first by the hundreds, then by the thousands, crying out in what became our trademark call and response: "Forward together, not one step back!"
The strength of our movement is that we are rooted in a moral critique based on our deepest moral values. We refuse to be sectarian or narrow. We remain nonpartisan. We are interracial, inter-faith, and inter-generational. And we keep on coming.
God has set in motion a nonviolent, volunteer army of love that is prepared to fight in the streets, in the courtroom and at the ballot box. This movement understands that the real victory of democracy is what Dorothy Day called "a revolution of the heart"-changing ourselves and changing our culture, not merely changing our leaders. In my faith tradition, the book of Mark asks us, "For what should it profit a man, if he shall gain the whole world and lose his own soul?"  This is as true for a culture as it is for an individual.
For us, victory means altering the arc of our history away from the politics of domination toward a social vision grounded in respect for the dignity of ordinary people, the needs of those most vulnerable among us, the wellbeing of all our children, and the health of our democracy. These commitments are not the property of any one faith or faction; they do not belong to conservatives or liberals, Republicans or Democrats. They are common to all faiths and also to those who arrive at this vision by human reason or simply by trust in a moral universe.
Our movement and its victories belong to all who seek to build communities that reflect our most deeply held moral values. But it does demand that we understand our moment in the unfolding history that we are trying to change-starting with what has been happening here in North Carolina.
As we look to 2017, we invite partners across the nation to enlist in this moral movement on December 31st through a National Watch Night Service. 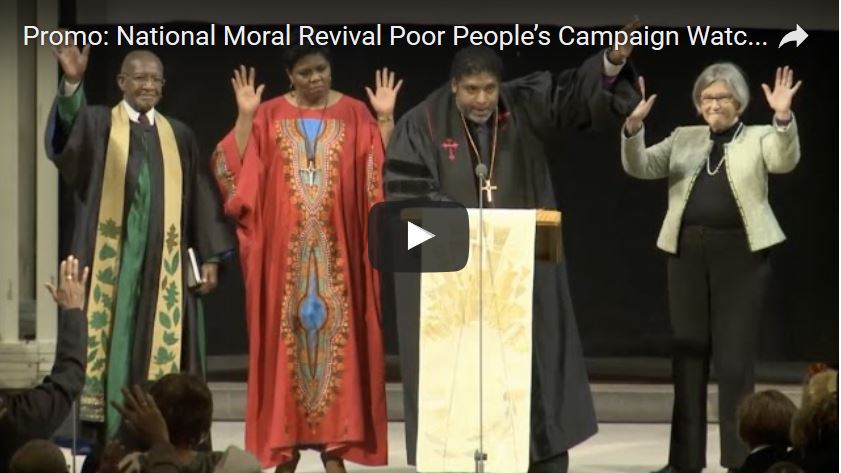