Weapons of Math Destruction: Cathy O'Neil Adds Up the Damage of Algorithms

In theory, mathematics is neutral – two plus two equals four regardless of what anyone wishes the answer was. But in practice, mathematical algorithms can be formulated and tweaked based on powerful interests. 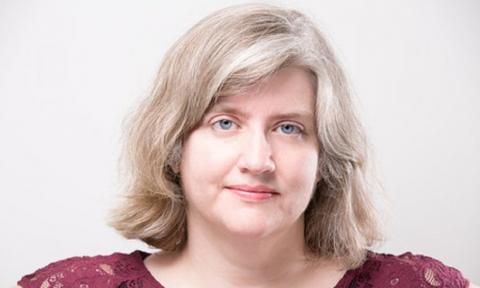 Cathy O’Neil: ‘I left disgusted by finance because I thought of it as a rigged system.’, Adam Morganstern

People keep suggesting that democracy is alive and well because we have two parties that don’t agree on everything. I think that’s total bullshit.” When you meet Cathy O’Neil, a data scientist and author, you quickly discover she isn’t exactly convinced about the health of the US’s electoral system.

A Harvard PhD graduate in mathematics and actively involved in the Occupy movement, O’Neil’s experience is crucial to her new book: Weapons of Math Destruction describes the way that math can be manipulated by biases and affect every aspect of our lives.

As well as questioning the two-party system in the US, she’s also looked at how mathematics has been used in the housing and banking sector to affect our lives via her blog mathbabe for more than a decade. So what’s her problem with good old American democracy in 2016?

“Democracy is more than a two-party system. It’s an informed public and that’s what’s at risk,” she says. “The debates are where you would hope to find out real information, but they’re just talking about their dick size … The algorithms are making it harder and harder to get good information.” And algorithms, rule-based processes for solving mathematical problems, are being applied to more and more areas of our lives.

This idea is at the heart of O’Neil’s thinking on why algorithms can be so harmful. In theory, mathematics is neutral – two plus two equals four regardless of what anyone wishes the answer was. But in practice, mathematical algorithms can be formulated and tweaked based on powerful interests.

O’Neil saw those interests first hand when she was a quantitative analyst on Wall Street. Starting in 2007, O’Neil spent four years in finance, two of them working for a hedge fund. There she saw the use of weapons of math destruction, a term O’Neil uses to describe “algorithms that are important, secret and destructive”. The algorithms that ultimately caused the financial crisis meet all of those criteria – they affected large numbers of people, were entirely opaque and destroyed lives.

“I left disgusted by finance because I thought of it as a rigged system and it was rigged for the insiders,” says O’Neil. “I was ashamed by that – as a mathematician I love math and I think math is a tool for good.”

Among the many examples of powerful formulas that O’Neil cites in her book, political polling doesn’t come up, even though this election cycle has made polling’s power more talked about than ever before. So is it dangerous? Could polling be a weapon of math destruction?

She pauses – “I’m not sure” – then she pauses some more. “I think polling is a weapon of math destruction,” she says. “Nobody really understands it, it’s incredibly widespread and powerful.” We discuss the success of Nate Silver, the founder and editor-in-chief of FiveThirtyEight (a site I spent almost two years working at). Silver has positioned himself as one of the few people who does understand polling, and as such he’s been christened as a soothsayer and savant. We’re desperate for math answers, which is part of the reason we ended up here, according to O’Neil.

“You don’t see a lot of skepticism,” she says. “The algorithms are like shiny new toys that we can’t resist using. We trust them so much that we project meaning on to them.”

That desperation is potentially very damaging to democracy. Increasingly the public is informed about polling data, not policy information, when deciding who to elect. “It’s self-referential,” O’Neil explains.

Like so many algorithms, political polls have a feedback loop – the more we hear a certain candidate is ahead in the polls, the more we recognize their name and the more we see them as electorally viable.

O’Neil’s book explains how other mathematical models do a similar thing – such as the ones used to measure the likelihood an individual will relapse into criminal behavior. When someone is classed as “high risk”, they’re more likely to get a longer sentence and find it harder to find a job when they eventually do get out. That person is then more likely to commit another crime, and so the model looks like it got it right.

And then there are those biases. Contrary to popular opinion that algorithms are purely objective, O’Neil explains in her book that “models are opinions embedded in mathematics”. Think Trump is a hopeless candidate? That will affect your calculations. Think black American men are all criminal thugs? That affects the models being used in the criminal justice system, too.

Ultimately algorithms, according to O’Neil, reinforce discrimination and widen inequality, “using people’s fear and trust of mathematics to prevent them from asking questions”. The seemingly contradictory words “fear” and “trust” leap out to me: how many other things do we both fear and trust, except perhaps for fate or God? O’Neil agrees. “I think it has a few hallmarks of worship – we turn off parts of our brain, we somehow feel like it’s not our duty, not our right to question this.”

But sometimes it’s hard for non-statisticians to know which questions to ask. O’Neil’s advice is to be persistent. “People should feel more entitled to push back and ask for evidence, but they seem to fold a little too quickly when they’re told that it’s complicated,” she says. If someone feels that they some formula has affected their lives, “at the very least they should be asking, how do you know that this is legal? That it isn’t discriminatory?’”

But often we don’t even know where to look for those important algorithms, because by definition the most dangerous ones are also the most secretive. That’s why the catalogue of case studies in O’Neil’s book are so important; she’s telling us where to look.

Weapons of Math Destruction: How Big Data Increases Inequality and Threatens Democracy is out now and published by Crown

Mona Chalabi is data editor at Guardian US. She previously worked at FiveThirtyEight, the Bank of England, the Economist Intelligence Unit, Transparency International and the International Organisation for Migration. Follow her on Twitter @MonaChalabi and on Instagram @Mona_Chalabi.