Interview with behavioral scientist Dr. Brian Wansink, author of Mindless Eating (2006) and Slim by Design (2014) and founder of the Food and Brand Lab at Cornell University. The Food and Brand Lab was started in 1997 at the University of Illinois (before moving to Cornell in 2005), to explore how humans relate to food with the end goal of uncovering solutions to improve eating environments and help individuals eat better. Wansink analyzes why we eat what we eat. 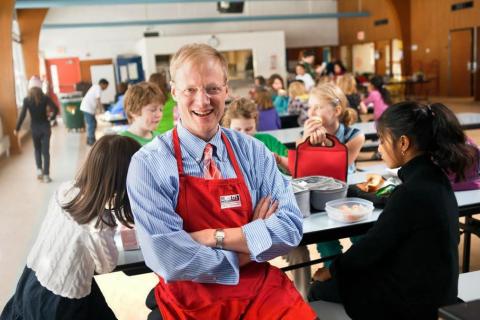 I recently sat down to chat with behavioral scientist Dr. Brian Wansink, who is the author of Mindless Eating (2006) and Slim by Design (2014) and founder of the Food and Brand Lab at Cornell University.The Food and Brand Lab was started in 1997 at the University of Illinois (before moving to Cornell in 2005), with the desire to “discover how humans relate to food with the end goal of uncovering solutions to improve eating environments and help individuals eat better.”

Wansink analyzes why we eat what we eat and uses his findings to help both consumers and companies make healthier choices.

Cook’s Science: How did you get inspired to research food and how we decide to eat?

Dr. Brian Wansink: I grew up in the least cool place to grow up—Iowa. There were lots of farms, and I sold vegetables door to door. As a little boy, I always found it interesting that one house would buy everything I had in my little wagon. The house next door—which was identical in all ways—would look at me like I was selling kryptonite. Your smartest friend that can answer every question you could ask can’t answer why they ate what they ate today. We really can’t explain most of why we do what we do. The things around us are what nudge us into doing things. Our research found that the typical person thinks they make 25 to 30 decisions a day about food. But in reality, we make over 200 decisions every day.

CS: What’s the most common misconception about food and psychology?

BW: First, that we are the master and commander of all our food decisions, and second, that we know what we like. We found that labeling something as a “succulent Italian fillet” rather than a “fish stick” makes an incredible difference. Participants rate the food as better, even if they ate the exact same thing.

CS: What do you think has been one of your more successful findings that has changed the way people eat?

BW: Insistence on wanting to believe that we’re smarter than a plate or a bowl, and that we’re [in control] of every one of our decisions has [had] the biggest influence. It’s been what’s led to the adoption of a ton of our stuff. While the majority of people we’ve done studies on accept that there are external factors leading to their food choices, findings show that around 4 percent of our subjects still refuse to acknowledge that whatever influenced them actually has influence on them. If we show, for instance, they serve themselves 22 percent less food because they had a 9½-inch plate instead of an 11-inch plate, they’ll just say they weren’t as hungry.

When you realize that most of the people who you want to influence—family members, kids—are not going to acknowledge they have a problem, it makes it easier to implement design. In terms of specifics, we designed the 100-calorie pack, and I introduced it to Nabisco and Mars and Kellogg’s. People thought it was stupid, saying, “We’re in the business of selling more food, not less food.” I argued, “You’re in the business to make money, you can make more money selling less food.” Once that got traction, it really moved.

CS: What do you think the effects are of photographing your food?

BW: Day-to-day life really isn’t that exciting and taking a photo of a meal makes it more eventful. Whether a person decides to post it on their Facebook, Twitter, or Instagram, it ends up doing a similar thing to what was done 500 years ago. We recently did this article where we looked at paintings over the last 500 years. The point of that was there are a lot of public health critics that criticize this obsession with our food culture and people worshipping the food on their plates, that it’s the sign of the decline of civilization. Our research suggested that back then, people were painting ridiculous things that were almost impossible for them to find or eat. Fifty-one percent of the paintings in the Netherlands had lemons in [them]. Lemon trees were a long ways away from the Netherlands. Thirty percent of the paintings in Germany had lobster and shellfish. Less than 1 percent of Germany’s [landmass] is coastline. The extreme view that we portray something aspirational or more exciting than your typical meal is something that follows for a long, long time, and is no more the decline of Western civilization today than it was in Rembrandt’s time.

CS: What do you think the next generation will be eating that we’re not eating today?

BW: I think what’s going to happen in the future is people are going to feel more in control of what they’re eating. Cooking isn’t dying. Maybe it’s going to be more restaurants where you build your own meal, or more of these assemble at home sort of things like Blue Apron. But I think there is going to be a regression toward people believing they have more control over their food environment. Many people don’t think they can cook, but they don’t realize they are 10 dinners away from being a competent cook.

This interview has been edited and condensed.

Photography courtesy of the Food and Brand Lab.