Hit that old song again, loud and clear! "Over there, over there, Send the word, send the word, That the Yanks are coming, the Yanks are coming." Yes, sirree! Shades of 1918 and the Battle of the Marne! Shades of 1944 and the beaches of Normandy! But no, not just shades and not just words have already been sent. The U.S. is sending significant military assets to Germany, and to countries bordering Russia. 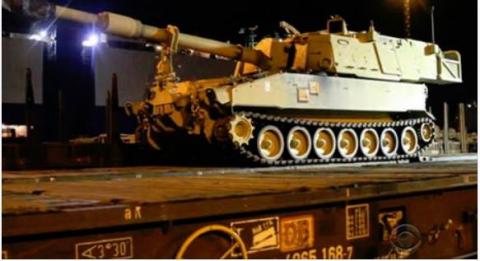 U.S. tanks roll into Germany, in final days of Obama Administration, "to protect eastern Europe against as a potenital Russian invasion.", CBSNews.com
2017 had hardly begun in Germany's port of  Bremerhaven when 4000 lads and lasses in Yankee uniform disembarked and unloaded three shiploads, over 2,500 tanks, trucks and other combat vehicles, and sent them on by rail, on ferries through the Baltic or clanking along those Autobahn highways through North Germany. So many memories!
Colonel Bertulis at US Command Headquarters in Stuttgart called it "the greatest redeployment operation of the US Army to Germany since 1990.It will ensure that the necessary combat power is brought to the right place in Europe at the right time." Higher up the ladder, Lt. Gen. Frederick Hodges, commander of US forces in Europe, said, "Three years after the last American tanks left the continent, we need to get them back."
What dangerous front are they moving to defend? Where, this time, is "over there"?
Well, it is not exactly a front. Or not yet! Not one BB gun has been fired along the Russian border with Latvia or Estonia, nor along the short Polish or Lithuanian borders around the small, fully surrounded Russian enclave at Kaliningrad. Nor has anyone heard Putin or any other Russian leader utter a single threat or make one demand directed at any of those countries.
But, as General Hodges told journalists, the measures were a "response to Russia's invasion of Ukraine and the illegal annexation of Crimea." He added consolingly, "This does not mean that there necessarily has to be a war, none of this is inevitable, but Moscow is preparing for the possibility."
Peace demonstrations (far too few) point out that Russia has 900,000 armed troops while NATO has 3.5 million, stationed in over a hundred bases in a world-wide ring around Russia. It threatened to shut off Russia's only warm-water naval base on the Crimea (where most people, Russian-speakers, voted for their "take-over" in a referendum) while moving to close the ring from the south. It's coup d'état Ukrainian government of Russophobes (and many fascist types) was largely set up by Assistant Secretary of State Victoria Nuland in 2014. "'Yats' is our man," she telephoned and, after more money and violence, Yatsenyuk it was! People wondered what Washington would do if friends of Russia moved right up to American borders. Then they recalled coups or invasions in Guatemala, Cuba, Grenada, Panama, Chile. Not to mention Iraq, Afghanistan, and Libya, hardly closer to US borders!
Some Europeans even wondered at the planned arrival date of the new troops at the Russian borders, January 20th  of all days! Were there any star-struck generals or well-groomed connivers who hoped to end an era not with a whimper but with a bang? Did some fear that Donald Trump, while switching back and forth on nearly everything else he said in his campaign, might just possibly, for whatever reason,  keep his word about getting along peacefully with Putin? For the highest ranking neo-con enthusiast down to the last deluded riveter at Lockheed-Martin - that sounded alarming!
How many Germans believe all the New Year's fireworks from Washington about Putin's electoral hacking? Most of them certainly drew other conclusions as to why Clinton was defeated. They have many questions about that mysterious American institution, the Electoral College, which somehow offers nothing remotely resembling anything like an academic degree. Many have lost old faiths in their great friend and protector.
But some welcome this operation, "Atlantic Resolve", like smaller ones which preceded it. Although it is not sponsored by the UN, not even by NATO, but only by the outgoing US administration, some political leaders, as in Canada and Britain, now want to have the German Bundeswehr get into the act and send a battalion to Lithuania. The Baltic countries are not far from St. Petersburg. Then still called Leningrad, a million and a half people died there, mostly of hunger and cold during the genocidal Nazi siege in 1941 to 1944. The flags and uniform colors of those who maintained that siege were different, but some traditions have long lives, as too many have been demonstrating in loud marches and more and more voting booths.
As yet, at least, not too many in Germany like the idea of playing mass scale Russian roulette. In Augsburg, over 50,000 people, many old-timers unable to walk, had to leave homes and hospitals on Christmas Day so a giant triple-fused bomb from World War Two, 75 years ago, could be defused. And now there are those, only a hundred miles away in Stuttgart, who speak lightly of a Number Three! And today's missiles can have phosphorus, uranium and nuclear components, and be delivered by unmanned drones.
If this Operation Atlantic Resolve somehow recalls the idea of New Year's resolutions, millions could supply a few of absolute, overriding urgency; move troops and weapons out and away, negotiate, make peace, break with the conscience-less plans and ambitions of a limited number of greedy adventurers and turn to the planet's vitally crucial problems - a decent life for all its people and plans for saving our tortured planet.