She was warned. She was given an explanation. Nevertheless, she persisted...Last night, Sen. Elizabeth Warren (D-MA) spoke out against the nomination of Sen. Jeff Sessions (R-AL) for attorney general, reading a letter from Coretta Scott King. In a highly unusual move, Majority Leader Mitch McConnell (R-KY) led a vote to silence Warren?-?a rebuke not extended to several of her male colleagues. It follows an old and very sexist playbook. 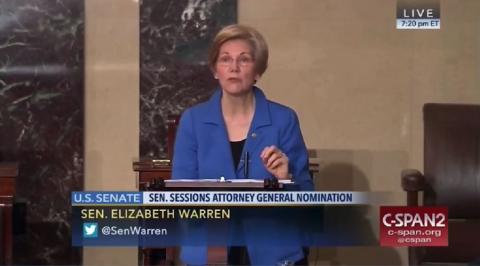 “She was warned. She was given an explanation. Nevertheless, she persisted.”

Thanks, Mitch McConnell, for a feminist rallying cry that might well carry down through the decades. In case you missed it: In American politics yesterday, Elizabeth Warren was giving a speech in the Senate opposing Jeff Sessions, the nominee for attorney general, on the grounds that he has a well-documented history of racism. She was reading a 1986 letter from Coretta Scott King, MLK Jr’s widow, about King’s opposition to Sessions, when Warren got shut down by Mitch McConnell on a obscure procedural technicality for “impugning the motives of her colleague.”

The details of this are relevant for other things, but what I want to highlight here is the accidental beauty of McConnell’s statement.

“She was warned.” — Ooooh haven’t we all? Haven’t we all been warned about what would happen to us good girls if we got out of line? If we wore THAT outside. If we upset men/our parents/the authorities/other women. We’ve been warned our whole lives. Warned to shut us down. Warned to keep us in our place. Warned by faux-authorities who position themselves as knowing better when really all they were after is their own superiority.

“She was given an explanation.” — I had to laugh. He wants so badly for mansplaning to still work. It didn’t. It won’t. Not anymore. You can’t just explain to the little ladies why they should shut up anymore. Somehow Warren has got it in her pretty little head that what she has to say is worth hearing.

“Nevertheless, she persisted.” — THERE IT IS. That right there is gold. Epitaph-worthy. The highest accidental compliment, from a man who has no idea how much women are used to being warned and explained at. Warren is having none of it. She will persist.

McConnell used the passive voice to describe the man (himself) warning Warren, and the active voice for her. He tried to make it ominous by taking the warner and explainer off-stage, making himself godlike, and instead made her the center of the story.

She is the agent here. The actor. The one with agency. The one doing stuff, while McConnell flaps his mouth about procedure off to the side.

We’ve been warned. We’ve been given an explanation. Nevertheless, we persist.

The future is female.

He used it to rebuke Sen. Elizabeth Warren, D-Mass., who read a 1986 statement from the late Coretta Scott King during a debate Tuesday night over attorney general nominee Jeff Sessions, an Alabama senator.

“He is, I believe, a disgrace to the Justice Department and he should withdraw his nomination and resign his position,” Warren read, quoting a letter that Martin Luther King Jr.’s widow wrote when Sessions was nominated to be a federal judge.

McConnell, a Republican from Kentucky, called foul, saying, “The senator has impugned the motives and conduct of our colleague from Alabama.” And that set up a vote on her conduct. Warren’s fellow senators backed McConnell’s rebuke by a vote of 49 to 43, which means Warren isn’t allowed to speak during the rest of the debate over Sessions.

“Sen. Warren was giving a lengthy speech,” McConnell explained. “She had appeared to violate the rule. She was warned. She was given an explanation. Nevertheless, she persisted.”

Three little words that women can draw on for decades to come, when something needs to be said and, darn it, we plan to say it.

When we’re being talked over in meetings. When we’re fighting to be heard in male-dominated fields. When we’re standing up for our values. When we’re doing valuable work and people reduce us to our appearance.

One of my favorite Michelle Obama quotes is contained in Peter Slevin’s excellent biography, “Michelle Obama: A Life.” It’s in response to the public’s obsession with her looks, which all too often veered into shallow (and sometimes cruel) territory.

“We take our bangs and we stand in front of important things that the world needs to see,” she said. “And eventually, people stop looking at the bangs, and they start looking at what we’re standing in front of.”

Obama made an art out of persisting.

In “Feminist Fight Club: An Office Survival Manual (For a Sexist Workplace),” author Jessica Bennett points to research showing women are twice as likely as men to be interrupted when they speak during professional meetings.

“Just keep talking,” she writes. “Keep your pauses short. Maintain your momentum. No matter if he waves his hands, raises his voice or squirms in his chair, you do you.”

Or, she suggests, push back. “Bob, I wasn't done finishing that point. Give me one more sec.”

Sometimes the floor remains yours; sometimes you get rebuked and silenced by your colleagues.

But you say what needs to be said. And here and there, you inspire a rallying cry.

And we’re grateful to her.

[Heidi Stevens can be reached by email at hstevens@chicagotribune.com or on Twitter @heidistevens13 ]