The web of conflicts that has enveloped the Trump administration has ensnared the pipeline project, too. The Guardian has reported that Trump has invested in the company building the pipeline, and that Energy Transfer Partners' CEO Kelcy Warren contributed both to Trump's presidential campaign and the Republican National Committee. 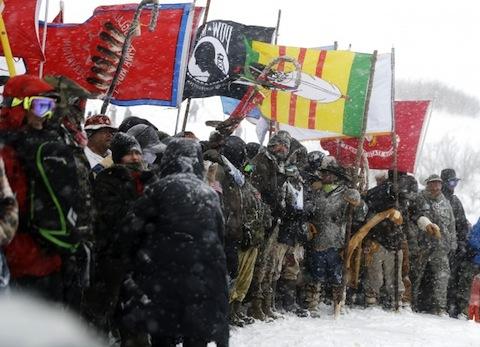 Military veterans and Native American tribal elders come to a stop for a ceremonial prayer during a march to a closed bridge across from the Dakota Access oil pipeline site in Cannon Ball, North Dakota, Monday, December 5, 2016., AP Photo/David Goldman

Donald Trump hung a portrait of Andrew Jackson in the Oval Office on the same day that he signed an executive order to expedite construction of the Dakota Access Pipeline. The chilling symbolism of giving pride of place to the man who presided over the Cherokees’ expulsion from their Eastern lands in one of the largest forced migrations of America’s indigenous people was hard to miss. The Army Corps of Engineers followed up on the order by granting an easement to the Energy Transfer Partners, the company behind the pipeline project, to complete the last segment of the $3.8 billion, nearly 1,200-mile underground project.

The construction gets back on track just as protests spread nationwide from the North Dakota homelands of the Standing Rock Sioux and crystalize a new phase in the ongoing quest for indigenous rights. What began as a struggle last spring to protect water resources and sacred tribal grounds of a North Dakota tribe instead galvanized tribes across the country, bringing together a remarkable and diverse coalition of youth, long-time Indian activists, indigenous peoples from around the globe, environmentalists, and veterans groups who kept up the pressure up in North Dakota and on social media.

The pipeline fight remains combustible. In early 2016, most Americans, including the news media, were largely unaware of what was unfolding in North Dakota, transfixed as they were by the presidential campaign. That ignorance ended on Labor Day weekend when private security teams unleashed guard dogs on the “water protectors,” as the people who had set up camps came to be known. The images of animals attacking peaceful protestors called to mind those of police with dogs going after African American civil rights protestors in the South only a few decades ago. Instead of deterring new pipeline opponents from joining them, the violence perpetrated on the protestors continued and brought new protestors streaming into North Dakota.

Darren Brown, a veteran news photographer and reporter with Cheyenne and Arapaho Television, Oklahoma’s first Native American owned and operated broadcast TV station, was one of them. He joined a group that took supplies to Standing Rock last October. He says the violence made him “extremely angry” and likely persuaded others to make the same journey. The array of tribal nations who came to Standing Rock—Pawnee, Cheyenne, Yakima, Apache, Mohawk, and others—left a strong impression on him, especially when one man, a Pawnee, noted at a meal, in recognition of historic tensions still remain between some tribes, that “Pawnees and Cheyennes would never sit and have dinner.”

The protests wound down with the arrival of the harsh prairie winter coupled with the Obama administration’s move to de-escalate tensions with the January decision by the Army Corps of Engineers to deny the easement. But with the careless aplomb has marked his first weeks in office, Trump not only issued an executive order reversing the Corps directive, but augmented it by commenting that the project was “not controversial.”

“Donald Trump watches TV constantly,” says Brown. “There is no way he would not know that it is controversial.”

The web of conflicts that has enveloped the Trump administration has ensnared the pipeline project, too. The Guardian has reported that Trump has invested in the company building the pipeline, and that Energy Transfer Partners’ CEO Kelcy Warren contributed both to Trump’s presidential campaign and the Republican National Committee.

North Dakota’s congressional delegation sees the Army Corps decision as the final chapter in the pipeline battle. Democratic Senator Heidi Heitkamp said in a statement that the decision “brings this issue one step closer to final resolution—and delivers the certainty and clarity I’ve been demanding.”

Standing Rock Sioux Tribal Chairman David Archambault II has asked people not to return to the region, and rather, to take the fight to the states and to Washington.He has promised to pursue the fight through the courts. Another tribe, the Cheyenne River Sioux filed a new case challenging the pipeline that summaries the worries about the possible drinking water contamination from leaks. Archambault is “in a tough position,” says Brown. “I think he realizes that this protest has done all it can do without someone getting killed,” he says.

Not everyone wants to wait for the courts, however. Many of the people who remain at the site are moving only to safer grounds from areas that will that see seasonal spring flooding after the snow melts. The Cheyenne River Tribal Council of South Dakota has invited some veterans to return to the area and at least 2000 veterans are already in North Dakota.

LaDonna Brave Bull Allard, the Standing Rock Sioux whose call to action set the stage for the massive reaction to the pipeline’s construction, has criticized Archambault’s request to stand down. She intends to continue the fight against threats to the local water supply and what she says is the encroachment on her family’s burial grounds. For her, the current massing of “mercenaries, the military, and the National Guard” in the area near her water protectors camp is “very frightening.” She says, “They are going to kill us.”

“We will stand and pray, but we will resist, we have no choice,” the 61-year-old grandmother of 17 told The American Prospect. “What would you do if they came after the last of your people? This has never been about presidents of the United States or agencies. It’s about who we are and the time that we are in.”

“Folks up there are very, very resolute,” says Brown.

Meanwhile, the Standing Rock conflict has accelerated economic protests against the corporations backing the pipeline’s completion. The city of Seattle severed its $3 billion investment in Wells Fargo, in part, because of the bank’s investment in the pipeline project.

But it’s the protests by the people on site that ultimately command attention and demand responses. Trump is likely motivated more by his commitment to boost domestic oil and gas production than by animus against Native Americans. However, during his transition, a group of Trump advisors running his Native American Affairs Coalition proposed privatizing Indian lands, which sit on one-fifth of the country’s known gas and oil reserves. Should that idea become policy—something that might prove irresistible to a man who thrives on conflict—it could well set off new protests and drive a wedge between resource-rich and resource-poor tribes.

Even if that doesn’t come to pass, the order to resume pipeline construction at Standing Rock may well renew the anti-Trump protests. It could also portend the opening of another, darker chapter of conflict between Native Americans and the federal government.