'We, Too, Are Targets of Police Violence'

In her forthcoming book Invisible No More, author Andrea Ritchie chronicles cases of abuse and violence involving women of color and trans women, who often confront types of misconduct not typically associated with the use of force: being groped during stop-and-frisk, forced to perform sexual acts in lieu of arrest, and hit on during domestic-violence calls. 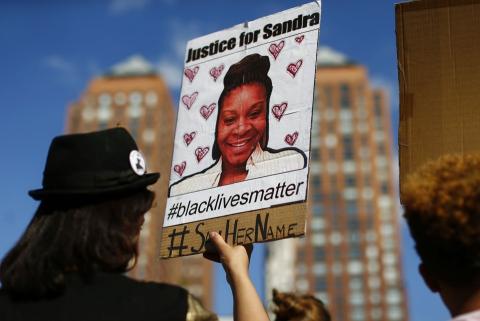 High-profile incidents of alleged police misconduct have captured national attention in recent years, from the 2014 shooting of Michael Brown to the deaths of Philando Castile and Alton Sterling in one 48-hour period last July. These black men are part of the demographic group whose cases the press most often covers, and in many ways rightly so: Black and brown men represent the majority of those affected by documented police-involved shootings. But there are other ways law enforcement unjustly exerts its power—and against other communities, too—that often slip below the national radar.

Recent efforts among activists have focused on elevating victims of police abuse who don’t receive nearly the same amount of attention, namely women of color and trans people. The #SayHerName movement, for example, is trying to raise the profiles of black women subjected to police violence or mistreatment: women like Sandra Bland, who in 2015 died in police custody in Waller County, Texas; Dajerria Becton, the 15-year-old who a McKinney, Texas, cop slammed to the ground at a pool party in 2015; and Rekia Boyd, who was shot and killed by an off-duty Chicago detective in 2012.

In her forthcoming book Invisible No More, author Andrea Ritchie chronicles cases of abuse and violence involving women of color and trans women, who often confront types of misconduct not typically associated with the use of force: being groped during stop-and-frisk, forced to perform sexual acts in lieu of arrest, and hit on during domestic-violence calls. As Ritchie puts it, women of color, “long the backbone of efforts to resist state violence, are insisting that we will no longer only play the role of aggrieved mother, girlfriend, partner, sister, daughter, or invisible organizer, and demanding recognition that we, too, are targets of police violence.”

Ritchie is a police-misconduct attorney who has represented women of color and members of the trans community for over two decades. I spoke with her about the unique ways that these groups interact with police and why they aren’t often the focus of mainstream discussion. Our conversation has been edited for length and clarity.

Maura Ewing: A large part of your book reads like a tribute to the dozens of women and girls of color and trans women allegedly killed or abused by police over the past two decades. The vast majority I had never heard of before. Why do you think so few have captured the national spotlight?

Andrea Ritchie: That is the million-dollar question. I offer a number of theories, but none of them are complete or completely satisfactory. I think the narrative of police violence has become entrenched around particular subjects—usually black and brown men, who are generally perceived not to be trans, not be queer—in such a way that when very similar things happen to black women, or gender-nonconforming or trans people, they are literally invisible to the public eye. They just don't register because they're not part of the mainstream narrative about what police violence is.

Simultaneously, the antiviolence movement focusing on women and LGBT folk is really centered around a narrative that involves private violence: domestic violence, sexual assault. And it has been unable or unwilling to see police violence as part of the spectrum of violence against women. As a result, women and LGBT people who experience police violence often exist in a netherworld, where their stories are visible to neither of the movements that would be natural allies in lifting them up.

Another reason that we don’t know a lot of these stories is that they often take place in private places. Police violence against black non-queer, non-trans men is something that happens more often than not in a public space—and there might be someone with a camera to record. Police violence against black women and other women of color often takes place in the context of police responding to violence in the home, or a mental-health crisis in the home, or in the context of child-welfare enforcement. It’s just quite simply a less public manifestation of police violence, and therefore it doesn’t flood our screens in the same way as incidents that take place in the public space.

Ewing: You write about the Daniel Holtzclaw case in Oklahoma City; he was an officer who was sentenced to prison for sexually abusing 13 black women. I thought the way his story came to light was interesting. One woman came forward: She was a grandmother who, it seems, he had mis-profiled—she actually didn't have a criminal history or anything he could use against her. Slowly, 12 other women followed her. I wanted to talk with you about that process: the fear that women have in coming forward with these cases, where there appears to be clear abuse and misconduct.

Ritchie: I think there are many reasons for it that weave together. The first, most obvious one is that the Department of Justice will tell you that only a third of sexual assaults will ever be reported to anyone. You can only imagine that that number is much smaller when the person or the institution you're supposed to report the sexual violence to is the institution that perpetrated it.

Also, the people that police officers target for sexual violence, as documented in study after study, are criminalized women; young women; women who are believed to be or are involved in the drug or sex trades; women with [mental-health issues]; immigrant women who are undocumented or are crossing the border. One officer I quote [who was convicted of multiple sexual assaults] talks about targeting survivors of domestic violence, and just point-blank says [something like]: “I step in like a knight in shining armor to rescue in a violent situation—of course I’m going to ask for a date.” It’s explicitly targeting women who are vulnerable, who might need the police in a future situation, or who will simply not be believed. I feel like we keep talking about the Holtzclaw case in isolation as if there are not thousands of Holtzclaws operating across the country over extended periods of time.

Often women are coming forward and not being believed. They are threatened with prosecution, subjected to examination by internal-affairs officers. In my experience of sitting in on those questionings, they sound more like an interrogation of the person who’s come forward to complain about the sexual violence. In one case, the woman [Tiawanda Moore, a 20-year-old from Chicago] came forward to complain about [an alleged sexual assault] and wound up being on trial herself for recording an internal-affairs officer discouraging her from perusing the claim. She wound up being on trial for wiretapping. The officer who committed sexual violence against her suffered no consequences whatsoever.

Ewing: Was she ultimately convicted of wiretapping?

Ritchie: No, she was acquitted. But she had to spend years fighting [the city]. That’s an extreme example of prosecutors with their priorities completely twisted, yet that takes place on a lower-grade level on a daily basis.

Ewing: The Justice Department’s investigation of the Baltimore Police Department, whose findings were released last summer, noted a number of instances where officers extorted sex from women who they perceived to be in the sex or drug trades in exchange for leniency. Is this something that is uniquely problematic in Baltimore? Or was it documented because this was the only probe to investigate this type of allegation?

Ritchie: Not at all uniquely problematic in Baltimore. I think that the DOJ investigation in New Orleans hinted at this also, and there have been other investigations, like one in a Pennsylvania town, focused exclusively on sexual violence. When the DOJ does an investigation, they look at the standard issues of racial profiling and excessive force. And excessive force as they’ve defined it involves physical violence and shootings, not sexual violence. It wasn’t a question that investigators were asking or [that others were bringing to their attention], therefore it wasn't something that was being investigated or the subject of consent-decree provisions. The difference in Baltimore and New Orleans and other places was that local advocates have really pushed.

Ewing: Can you talk about the impact you think Justice Department probes can have on women and trans communities? The current administration has indicated it likely won’t intervene in local departments.

Ritchie: What was disappointing about the Baltimore consent decree is that while this issue was noted in the investigation, there was nothing in the consent-decree provisions that directly addressed it. That’s often the case—sometimes the issue of police sexual violence comes up, but it’s treated as [as a one-off]. Rarely is there a systemic response.

Ritchie: I think the main [takeaway] I really want people to [have] is a change to the way they think about these issues. For example, to think about how doubling down on the War on Drugs is going to fuel all kinds of violent policing practices—from the killings of girls as young as Aiyana Stanley-Jones, who was 7, to black women who are as old as Kathryn Johnston, who was 92. Both were killed in militarized drug raids.

Think of the strip searches, the cavity searches, the sexual violence that that kind of policy is going to promote. Think about what more militarized policing [and more money for border security] are going to do in terms of creating more opportunities for police sexual violence against immigrant women at the border. Think about the impact of broken-windows policing. Think about what the enforcement of bathroom issues is going to look like, and how that’s going to contribute to the criminalization of trans and gender non-conforming people.

That’s really my hope—that the book will not just give people some new names and some new stories to mourn, but also that we will honor their memories and stories by changing the way that we look at racial profiling and police violence. And really make the kinds of demands and shifts in how society approaches violence and safety that would prevent the violations that they experienced.

This article is part of our project “The Presence of Justice,” which is supported by a grant from the John D. and Catherine T. MacArthur Foundation’s Safety and Justice Challenge.