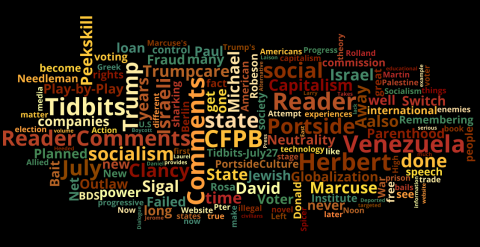 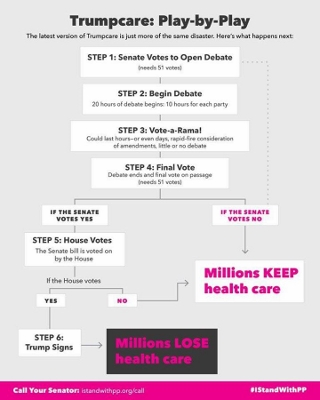 Here's how things could play out
Planned Parenthood Action - Monday at 6:34pm
Re: U.S. Lawmakers Seek to Criminally Outlaw Support for Boycott Campaign Against Israel
Let's not infringe on our own rights to defend Israel's government.
Carolyn Crabb
Posted on Portside's Facebook page
====
"The criminalization of political speech and activism against Israel has become one of the gravest threats to free speech. 43 senators - 29 Republicans and 14 Democrats - want to pass a law that would make it a felony for Americans to support the international boycott against Israel, which was launched in protest of the decades-old occupation of Palestine. The punishment: a minimum civil penalty of $250,000; a maximum criminal penalty of $1 million and 20 years in prison."
UCC Palestine/Israel Network
Posted on Portside's Facebook page
====
The international Right Wing of national parties is going full out in support of Zionist Israel (as opposes Israeli progressive people) and attacking all criticism of Israeli Occupation of Palestine and Zionists' advocacy for the continuation of a single Jewish State of Israel, and then too characterizing all criticism of the American Zionist lobbyists as ANTISEMITIC and hate speech.
The sad fact of this complex matter is the very opposite of what these reactionary politicians (AIPIC lobbyists) seek as their goal: A safe, secure, Jewish nation state, a state that is totally free from terrorists assaults and at peace with its disarmed and disempowered former "enemies."
The truth of the matter is that other Moslems are the vast majority of targeted victims of these so-called Islamic militant terrorist organizations ISIS/ISIL, A Qaeda, Hama, Hezbollah, etc.), and not "innocent" Israeli Jews and/or Jewish civilians in other nations.
However, to is also true that the more oppressive is the Israeli siege of Gaza (cutting off water supplies, turning off the power grid for hours, withholding the importation of vital supplies of food and medicines, and likewise the more expansive are the Jewish (apartheid-like) walled-in settlements in the West Bank, and further, the more the Israeli parliament and national government limit and/or deny Israeli Moslems their basic human rights, the more likely it is that Jewish civilians in France, The UK, Belgium, The Netherlands (and other NATO governments in active coalition with the US Israeli denial of Palestinian rights) will be in fact be targeted by suicidal bombers.
Now we have right-wing congressmen attempting to criminalize pro-Palestinian advocacy, protests, and other forms of free speech. What we are seeing is both the accelerated militarization of counter-insurgency, and also these politicians' attempt to normalize the criminalization of the Palestinian struggle for an independent, liberated nation state of Palestine.
Larry Aaronson
Posted on Portside's Facebook page
==== 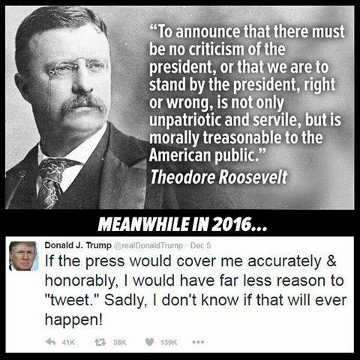 Maria M Fadli
Posted on Portside's Facebook page
Re: Donald Trump Tells His Voter Fraud Panel: Find Me 'Something'
All they have to do is look at the states we know have disenfranchised millions of voters.
Mark Binder
World's Biggest "Bait & Switch" Swindle -- How Now the World Will Never Know If Clinton Won the Popular Vote ...
Yesterday was the first meeting of Trump's "Presidential Commission on Election Integrity" -- a convening of voter suppression activists tasked with the mission of uncovering mass illegal voting in the 2016 election. Of course, everyone knows there was no large scale illegal voting -- if any at all -- during the election.  Trump was so livid with continuous media reports of his failure to win the popular vote that he created a "commission" of voter suppression zealots to compile a report that would be used to nullify the votes of persons with similar names as having voted more than once.
Because there is no evidence of mass illegal voting in the 2016 presidential election, the true intent of Trump's commission is clearly to come up with ways to suppress voter turnout in future elections. Some of the superstars of the commission are Kansas Secretary of State Kris Kobach, Heritage Foundation staffer Hans von Spakovsky, and Ohio Secretary of State Ken Blackwell, all of who have long supported and implemented different methods of preventing voters from exercising their rights.
The commission has met a stone wall in that 45 states and DC refuse to provide names, party affiliation, social security I.Ds., employment, and other personal information on each registered person.  Hiding behind the lack of manipulatable data, Trump will now declare that HRC's vote totals cannot be verified therefore it is he who won both the electoral and popular votes. What a Sicko !!
James E Vann
Re: Remembering the Great Essayist and Activist Clancy Sigal -- Clancy Sigal Has Gone Away
A friend with Chicago roots. Glad to have had the opportunity to trade emails and posts these past 20+ years. Remember reading Going Away, when I was going thru similar experiences, a generation later.
Jay Schaffner
Posted on Portside's Facebook page
====
I remember Clancy well. In fact, I am a character in the novel. I am Sam, whom he visits in San Francisco.
Donald Todd
====
Nice one. He writes that "Going Away" is still in print. I'm surprised, you can't get it in this country.
Jemmy Hope
Posted on Portside's Facebook page
====
Thanks for posting. To my embarrassment I never ran across any of his writings. Must remedy.
Karl-Heinz Schroeder
Posted on Portside's Facebook page
Spicer bails as White House Press flack / Trump ponders power of the pardon 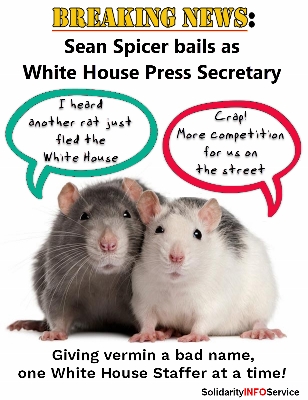 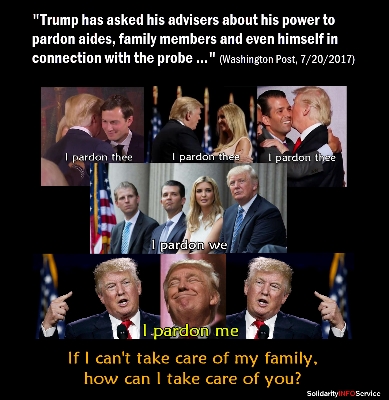 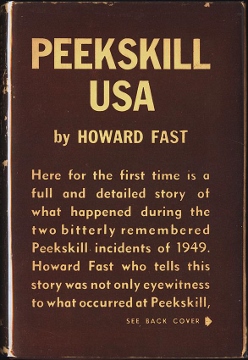 David Berger
Posted on Portside's Facebook page
Re: Why Net Neutrality Is a Working-Class Issue
Herbert Marcuse is one of the most influential thinkers of our time. Born in Berlin, Marcuse studied philosophy with Husserl and Heidegger at the Universities of Freiburg and Berlin. Marcuse's critical social theory ingeniously fuses phenomenology, Freudian thought and Marxist theory; and provides a solid ground for his reputation as the most crucial figure inspiring the social activism and New Left politics of the 1960s and 1970s. The largely unpublished work collected in this volume makes clear the continuing relevance of Marcuse's thought to contemporary issues. The texts published here, dealing with concerns during the period 1942-1951, exhibit penetrating critiques of technology and analyses of the ways that modern technology produces novel forms of society and culture with new modes of social control. The material collected in Technology, War and Fascism provides exemplary attempts to link theory with practice, to develop ideas that can be used to grasp and transform existing social reality.
Technology, War and Fascism is the first of six volumes of Herbert Marcuse's Collected Papers to be edited by Douglas Kellner. Each volume is a collection of previously un-published or uncollected essays, unfinished manuscripts and letters by one of the greatest thinkers of our time.
"Contrary to the interests of those who control its use, technology tends to disenchant the world. Mass consumption society strips gadgets of any magical value. Similarly, organisation (a technique for handling new techniques) robs new productive forces of their subversive appeal and their power of disruption. Organisation thus stands revealed as nothing but the pure organisation of authority.
Alienated mediations make man weaker as they become indispensable. A social mask disguises people and things. In the present stage of private appropriation, this mask transforms its wearers into dead things, commodities. Nature no longer exists. To rediscover nature means to reinvent it as a worthwhile adversary by constructing new social relationships. With the expansion of material equipment, the old hierarchical society is bursting at the seams "
Michael Handelman
Posted on Portside's Facebook page
Re: 'High Noon' Takes Aim At The Hollywood Blacklist
(posting on Portside Culture)
A must read for everyone else except MCA - the Conference for Studio Unions... the great giveaway.... 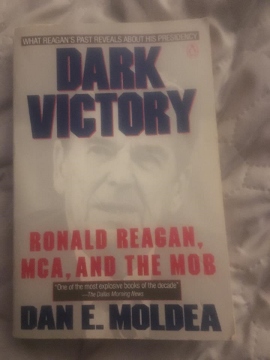 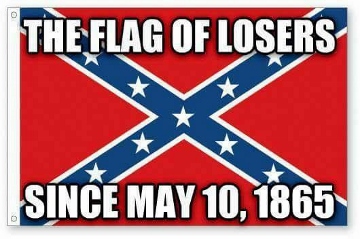 Martin Pitts
Pter A. Rolland
Posted on Portside's Facebook page
Re: The Coney Island Hot Dog: a Uniquely American Story
(posting on Portside Culture)
It wasn't a concern over "dog meat" - which was never mentioned in "The Jungle" - but rather the real concern over the fact that these meat packing conglomerates were known to boast of using "everything but the squeal."
There was an instance of a human falling into the lard rendering works, but the book notes indicated that his was the only instance in his "based on true life" novel that Sinclair was never able to verify.
Joe Elegua
Posted on Portside's Facebook page
New Website - What has the CFPB done in your state? 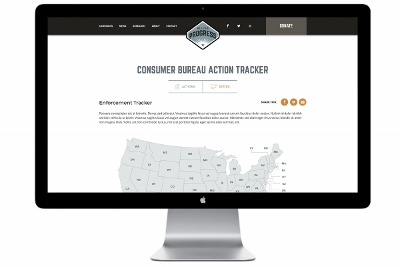 click here
We have some big news. Today, Allied Progress launched the CFPB Action Tracker, a new interactive website that tracks, state-by-state, the CFPB's enforcement actions against big banks, credit card companies, and other financial institutions that have preyed on consumers. The website is a great resource for elected officials and organization in the states, allowing them to see what the CFPB has done to benefit local consumers and arming them with important information in the fight to protect the CFPB from attacks by Wall Street special interests and their allies in Congress.
We hope you'll check it out and share it with others on your social media if you find the issue as important as we do:
Sample Tweet: http://aldpr.gs/2uBn9On
Sample Facebook Post: http://aldpr.gs/2uBSoJ0
Karl Frisch
Allied Progress