Medicare for All Bill Hits the Ground Running

Rallying behind Sanders bill, groups say "we will never stop fighting" for Medicare for All 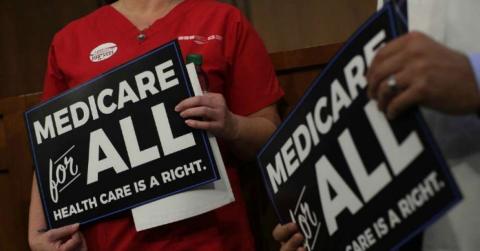 Flanked by nurses, doctors, activists, business leaders, and 16 of his Democratic colleagues, Sen. Bernie Sanders (I-Vt.) on Wednesday unveiled the Medicare for All Act of 2017, which proposes a "rational" transition away from the current for-profit system toward a single-payer program that guarantees healthcare to all Americans.

In speech after speech during Wednesday's event, nurses told harrowing stories detailing the massive human costs of providing healthcare only to those patients who can afford it. Melissa Johnson, RN, an oncology nurse with the California Nurses Association, said: "This system is killing too many of my patients."

Lawmakers, for their part, issued ringing endorsements of Sanders' legislation, which comes as Medicare for All is experiencing a "groundbreaking" surge in support at the grassroots and within the Democratic Party.

"We should understand that everyone—all—should receive the healthcare they need regardless of where they come from or their zip code," said Sen. Kamala Harris (D-Calif.), who was the first Democratic senator to co-sponsor Sanders' bill. "That's what this bill is about and I'm proud to co-sponsor. This is about a right, not a privilege for the few. Medicare for All stands for the proposition that all Americans, from the day of birth, will have access to healthcare."

"We speak our patients' names, we can't forget their faces, and we will never stop fighting until they have guaranteed access to healthcare as a human right."
—Bonnie Castillo, National Nurses United

Sen. Elizabeth Warren (D-Mass.) needed only a few words to summarize the transformational effects the Medicare for All Act would have on the American healthcare system, which consistently produces the worst outcomes in the industrialized world.

"Everyone gets health coverage, no one goes broke," Warren said.

In a speech at Wednesday's event, Sanders emphasized a point he has made repeatedly in the weeks leading up to the bill's introduction: that systemic change ultimately comes from the bottom up.

"This struggle will ultimately not be won here on Capitol Hill, but through grassroots activism all across this country," Sanders said. "The reality is that when millions of Americans stand up and fight back, when they become engaged politically, there is nothing that will stop us."

Sanders also vowed to "take this legislation to every state in the country" to "hear what the people have to say"—an approach the Vermont senator portrayed as a marked contrast to the GOP's secretive tactics.

Grassroots organizations—many of which were instrumental in the defeat of Trumpcare—appear ready to continue the struggle for universal healthcare in the face of opposition that is sure to come from the insurance and pharmaceutical industries, as well as from the entire Republican Party.

In an effort to demonstrate and bolster the widespread appeal of Medicare for All, MoveOn.org has begun circulating a petition to be delivered to Congress, which quickly garnered more than 80,000 signatures.

Other influential progressive organizations—from National Nurses United to Public Citizen to Our Revolution—celebrated the historic day in the struggle for single payer, while also recognizing that the fight is far from over.

"Providing safe and accessible healthcare is a moral imperative for our country," concluded Our Revolution president Nina Turner in a statement. "Our Revolution will be pushing our members to action, asking their senators to cosponsor and vote for Sen. Sanders' bill."

In a Medium post on Wednesday, Bonnie Castillo director of health and safety for National Nurses United, echoed Turner's call for a sustained grassroots push, writing: "The profit-driven private insurance industry can bet its last, morally corrupt dollar that nurses will never forget the tragic moments to which we have borne witness, day after day."

"We speak our patients' names, we can't forget their faces, and we will never stop fighting until they have guaranteed access to healthcare as a human right," Castillo concluded. "It's time for Medicare for all. Now. Today."