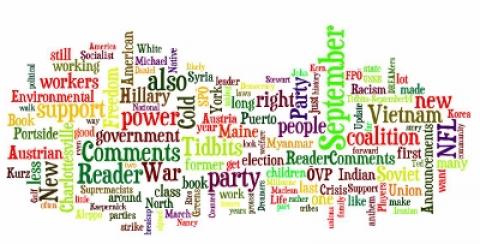 Tidbits - Reader Comments, Resources, Announcements and Shorts - September 14, 2017,Portside
Announcements:
Re: A Legacy of Environmental Racism
Have you been following the clear, well thought out environmental reporting by Sharon Lerner? Conveying complex subjects in ways we can understand them is both gift and craft, on display here in her powerful, timely take on toxins in Texas, US Environmental Protection Agency, and the huge sway of the fossil-fuel and allied chemical industries. Thanks to Portside for the link.
Daniel Millstone
Posted on Portside's Facebook page
Re: Puerto Rico’s Double Whammy: Irma and Hedge Funds
Only 10 percent of customers are without power in 6/7 days and Puerto Rican's have been the first responders in the emergency aid to the catastrophic of Irma's direct hit in nearby islands. Get your story up to date and maybe, just maybe, will see how we have and are taking care of our own and our neighbors, besides having an imposed fiscal junta from Congress which only efforts have been to paid the vouchers, not audited, illegal debt!
Juan Carlos Sifre
Posted on Portside's Facebook page
Re: Widening the Tent for a Multiracial Labor Movement
This is a beautiful article. The one thing missing is internationalism and the desire for peace. But MLK made those connections between racism, working class issues and peace. And they are still connected.
Sonia Collins
Posted on Portside's Facebook page
Re: Trump Ends 'Dreamers' Program, Leaving Fate of 800,000 Uncertain
It's not just kids. Many of these people are married and have kids and wives. Some have businesses and employ others. Hundreds have served or will serve in the military.
David Denson
Posted on Portside's Facebook page
====
He's obsessed with undoing everything Obama signed and created. He could care less about helping Americans. His main goal is to erase Obama's legacy off the map.
Juanita Torres La Bori
Posted on Portside's Facebook page
Support For ‘The Dreamers’ Continues to Grow 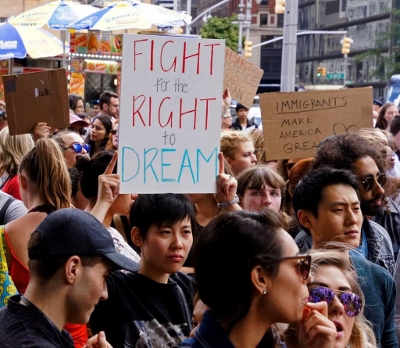 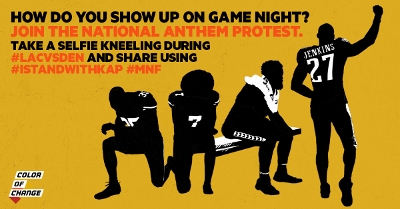 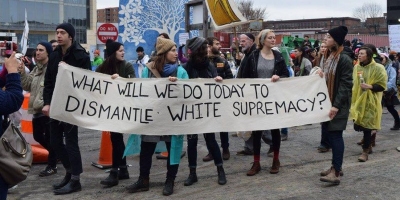 Photo credit: Jews For Racial & Economic Justice
Re: Left Strategy After Charlottesville
A very good summary of the progress of the anti-Trump resistance since his election and path forward to defeat the racist right wing, ruling class offensive currently underway.
John Jernegan
Posted on Portside's Facebook page
Re: Concession Fatigue in Connecticut
(posting on Portside Labor)
I certainly wouldn't vote to support the welfare queen corporations. They took the money, let them pay it back.
Donna Shumaker
Posted on Portside's Facebook page
Re: Rightwing Alliance Plots Assault to 'Defund and Defang' America's Unions
They want to be slave owners again.
Duke Spaulding
Posted on Portside's Facebook page
====
These slobs want to create an impoverished working class to enhance their own wealth.
Ted Roberts
Posted on Portside's Facebook page
====
They are going after the folks who gave us the weekend.
Jenny Kastner
Posted on Portside's Facebook page
Re: How Predictable Is Evolution?
For the record, the asteroid strike didn’t create the Gulf of Mexico. The Gulf was already there and the asteroid landed on the Gulf beach of the Yucatan Peninsula.
Now consider how narrow the isthmus is there, between the Gulf and the Pacific Ocean, and how fast the earth spins, ever eastward. Had the strike taken place in either body of water, there wouldn’t have been the immense amount of dust raised that caused the long long winter that killed off the dinosaurs (except for the ancestor(s) of the birds).
Quoting Paul Braterman:
“And if the meteorite had arrived ten minutes earlier, or ten minutes later, it would still no doubt have inflicted devastation, but the dinosaurs would still be here and you wouldn't.”
Chance really does play a part in the origin of species.
Ted Cloak
Re: Complaining About Hillary's Book
she is the one complaining. and complaining and complaining. a whole book of complaints.
Gwendolyn Ivey
Posted on Portside's Facebook page
====
11th commandment.......THOU SHALT NOT WHINE.
Gary Hicks
====
Ok you can kick me but I like this woman. This interview shows just how intelligent, thoughtful and, yes, principled she is. I don't have to agree with every one of her view to feel this way very strongly. She is so right on so many really big issues, including racism. 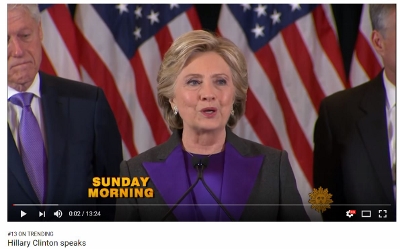 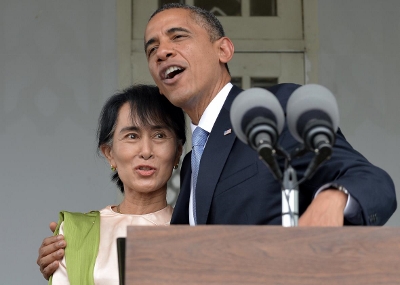 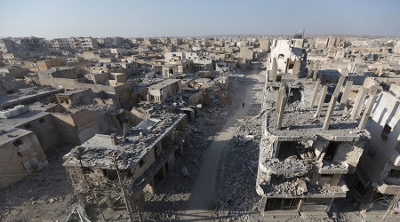 FILE PHOTO: People walk along a damaged neighbourhood in the northern Syrian town of al-Bab, Syria March 6, 2017.
Photo creditL Khalil Ashawi / Reuters // RT
Syria has signed a contract to buy Iranian power generation equipment for the country’s war-torn city of Aleppo, according to Syrian state news agency.
The agreement was reportedly signed by Iran’s state-run Mabna company during a visit to Tehran by the Syrian Electricity Minister Zuhair Kharboutli.
The deal is valued at €130 million and aims to provide 125 megawatts of electricity to the biggest city in Syria.
The minister also signed memorandums of understanding to import five generators for the coastal region of Latakia and restore the electrical infrastructure nationwide.
The new plant will reportedly generate 540 megawatts.
Earlier this week, the ministry said Syria and Iran would cooperate in renewable solar and wind energy.
Michael Munk
The Roots of Today's Radical Right and the Crisis of Democracy: A Conversation with Historian Nancy Maclean - New York - September 18 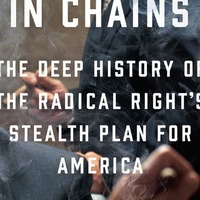 Monday, September 18, 2017 at 6:00 pm
Theresa Lang Community and Student Center, Arnhold Hall
55 West 13th Street - Room I-202
New York, NY 10011
The Robert Heilbroner Center for Capitalism Studies invites you to participate in a conversation between Nancy Maclean, author of the new book “Democracy in Chains: The Deep History of the Radical Right’s Stealth Plan for America”, and New School Historical Studies faculty. This panel discussion will take place on September 18th, 2017, at 6:00 PM, at the Theresa Lang Center, 55 W. 13th Street.
“Democracy in Chains” blows open the doors to the unknown history of the relentless campaign by the radical rich to eliminate unions, suppress voting, privatize everything from schools to Medicare and Social Security, and change the Constitution. MacLean traces this game plan back to one man, the Nobel Prize-winning political economist James McGill Buchanan, who forged his ideas in an attempt to preserve the white elite’s power in the wake of Brown v. Board of Education. The book also tells the story of the Koch brothers, following how their fortune has shaped the contemporary American right-wing. Maclean's book has drawn both high praise and deep criticism from a variety of writers and thinkers from across the ideological spectrum. Despite the immense controversy, the book is well on its way to becoming a center piece for our understanding of contemporary American political life.
NANCY MACLEAN is the award-winning author of Behind the Mask of Chivalry (a New York Times book of the year) and Freedom is Not Enough, which was called by the Chicago Tribune “contemporary history at its best”‘; The William Chafe Professor of History and Public Policy at Duke University, she lives in Durham, North Carolina.
Presented by The New School's Heilbroner Center for Capitalism Studies.
Rise Up & Be Counted - Special Report-Back From Charlottesville - New York - September 19

JFREJ will be hosting a special event next Tuesday, September 19th as part of our Rise Up & Be Counted campaign, and we would love to see you there!
We will be hearing a report-back from members of our community who were in Charlottesville last month, confronting white supremacist terrorism. Our guests Rabbi Lizz Goldstein (member of T'ruah) and Carmen Dixon (NAACP LDF, Black Lives Matter NYC) will be talking about their respective experiences in Charlottesville and sharing their courage and vision with us. We'll also do outreach together to grow our community and build our power in response to the critical threats that we are collectively facing in this moment.
As we approach Rosh Hashanah and the new year ahead, we want to ground ourselves in truth and community. We hope you'll join us:
Rise Up & Be Counted: Charlottesville Report-Back & Outreach Night
Tuesday Sept. 19th, 7:00 PM–9:00 PM
370 7th Avenue, 5th Floor, New York, NY
RSVP here
You can share the Facebook event to invite your friends. Additionally, if you haven't yet participated in the Rise Up & Be Counted membership campaign, you can commit to joining the campaign and /learn how to get involved here.
I look forward to seeing you Tuesday night!
Leo Ferguson
Movement Building Organizer, Jews for Racial & Economic Justice
====
NYCLU Benefit: Abraham Inc, Marc Ribot, members of Silk Road Ensemble
PS: Check out this upcoming concert to benefit our partners at the ACLU/NYCLU, co-sponsored by JFREJ! Performers will include the 10-piece supergroup Abraham Inc. (featuring David Krakauer, Fred Wesley and Socalled), Members of the Silk Road Ensemble, Marc Ribot, Where Worlds Collide (featuring South African pianists Kathleen Tagg and Andre Petersen), and Frank London of the Klezmatics. 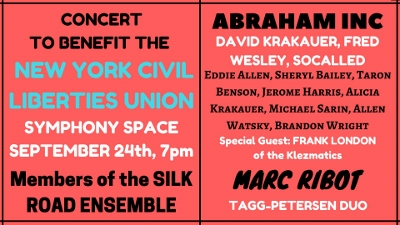 Buy your tickets here, and use the promo code: JFREJ to get a special discount!
Jews For Racial & Economic Justice
330 Seventh Avenue, Suite 1901
New York, NY 10001
Subscribe to Portside