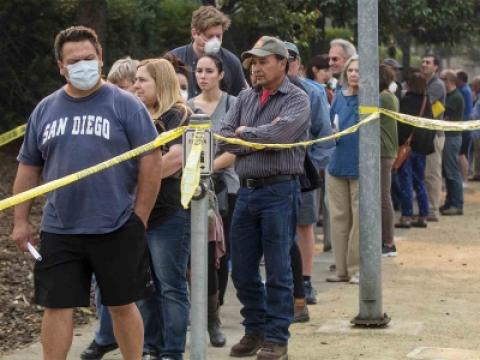 Residents near Atlas Peak Drive in Napa wait in line on Wednesday to be escorted to their homes following the destruction of the Atlas Fire., credit - Jessica Christian/San Francisco Examiner

The fires are not contained. The bodies haven’t been found. It’s time to talk about politics …

During and in the immediate aftermath of tragedies, we are told it’s not the time for politics. As a nation, we love the spectacle of what author Teju Cole called “the white-savior industrial complex,” in which justice is replaced by a “big emotional experience that validates privilege.” While we take a respite from breathing this week, let’s try justice instead.

Try as they might, politicians did not summon fires, storms or earthquakes. However, our craven politics certainly increased the likelihood that these calamities would occur and be horrendous. Politics ensured the inadequacy of the disaster response and, we may confidently anticipate, utter neglect of the effort necessary to rebuild and restore people and lands so traumatized or to mitigate further disasters.

Scientists told us this was coming, and we didn’t listen, because driving was too fun and the beef too delicious. We know what happens next. It’s what Naomi Klein called “disaster capitalism.” Corporations made fortunes ignoring the risks and now will make another fortune on the back end. Capitalism is a protection racket. While we heal and grieve, savvy businessmen seek to use our collective anguish to further privatize and profit and deregulate in the name of recovery. After Hurricane Katrina, for example, the Louisiana legislature handed the public school system to the charter school industry, with predictably wretched results for students.

The market can’t be allowed to lead the response to the fires, because the market is the problem. We knew that impending climate change meant these related cataclysms. Gov. Jerry Brown didn’t want to ban oil drilling or fracking. A new study published in the Proceedings of the National Academy of Sciences found that half of the increase in forest fires is from climate change. Yet, just last year, Gov. Brown vetoed SB 1463, a bipartisan bill to improve inspection of power lines and address higher risk of wildfires because of neglected power lines next to dead trees. Reports have suggested that PG&E power lines were the probable spark of the fires, which spread so ferociously because California is getting hotter and drier.

Fixing, regulating and preventing are a known and ongoing cost, whereas betting against worst-case scenarios is lucrative business for a quarterly return.

In Santa Rosa, more than 2,800 homes have been destroyed in a region with insufficient affordable housing; the city was trying to figure out how to build another 5,000 units. In one rental listing in Santa Rosa, the landlord hiked the rent more than 30 percent immediately after the fire started. Left to its own devices, will the market build the housing needed by the people affected? Or will it build for rich future residents and let those who lost everything fend for themselves?

We need a People’s Fire Recovery Plan, a “disaster socialism” to answer disaster capitalism. The people and land affected by the fires need to get whatever help they need, regardless of cost. The crisis is an occasion to demand what we needed last week — aggressive regulatory oversight to protect public health and safety, adequate funding of public services for first, second and third responders, physical and mental health care. Burning down a lot of real estate means there’s plenty of space to rebuild affordable housing and public transit. We need urban planning that prepares for more ecological adversity.

The old Industrial Workers of the World union song “Solidarity Forever” had a fitting lyric: “We can bring to birth a new world from the ashes of the old.” In 2017 California, we are learning the hard way that the Wobblies meant literal ashes. Get ready for the birthing.

Nato Green has had it.

[Nato is the creator of Iron Comic, the Iron Chef-spoofing comedy game show he sometimes co-hosts with Moshe Kasher. Nato has a regular column in the San Francisco Examiner, and his humor commentaries have appeared in VICE, Truthdig, Huffington Post, the San Francisco Bay Guardian, The Rumpus, and The Bold Italic. He also hosts FSFSF, a short spotlight on Bay Area comedy that airs every Tuesday during NPR's All Things Considered on 91.7FM KALW.

He was summed up more or less accurately by The East Bay Express as, "erudite and acerbic, a San Francisco-raised father, union organizer, gastronome, bibliophile, and political sparkplug." His first comedy album, The Nato Green Party, was released by Rooftop Comedy. Nato has been named San Francisco's Best Comedian by the SF Weekly, Huffington Post, SFist, and CBS.]