A scholar shares the true story of two men who stood up and spoke out against the murder of American Indians, and how they are celebrated today. Native American tribal members pay their respects at the headstone of Union Officer, Capt. Silas Soule, at the Riverside Cemetery Dec. 03, 2014 in honor of the 150th Anniversary of the Sand Creek Massacre. 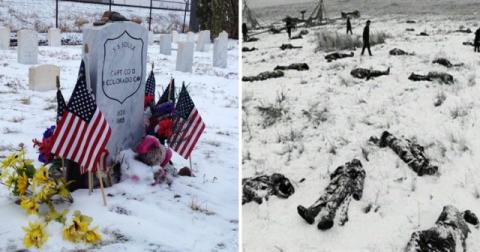 The 1864 Sand Creek Massacre was the pivotal event in the ultimate removal of the Arapaho and Cheyenne people from eastern Colorado. (Denver Post),

Every Thanksgiving weekend for the past 17 years, Arapaho and Cheyenne youth lead a 180-mile relay from the Sand Creek Massacre National Historic Site to Denver.

The annual Sand Creek Massacre Spiritual Healing Run opens at the site of the Sand Creek Massacre near Eads, Colorado, with a sunrise ceremony honoring some 200 Arapaho and Cheyenne people who lost their lives in the infamous massacre. This brutal assault was carried out by Colonel John Chivington on Nov. 29, 1864.

While the Sand Creek massacre has been the subject of numerous books, much less attention has been given to two heroes of this horrific event: U.S. soldiers Captain Silas Soule and Lt. Joseph Cramer.

These were men who rejected the violence and genocide inherent in the “conquest of the West.” They did so by personally refusing to take part in the murder of peaceful people, while ordering the men under their command to stand down. Their example breaks the conventional frontier narrative that has come to define the clash between Colonial settlers and Native peoples as one of civilization versus savagery.

This is a theme I’ve previously addressed as a scholar in the fields of American Indian studies and Colonial history, both in my book on the Indian captivity narrative genre, “Buried in Shades of Night,” and more recently in writings on Sand Creek. 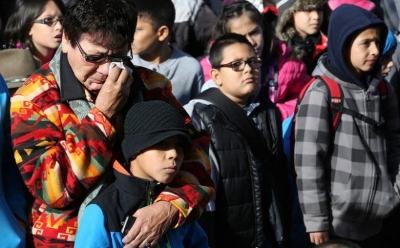 Members and supporters of the Arapaho and Cheyenne Native American tribes, 2014.
AP Photo/Brennan Linsley // The Conversation

The letters of Soule and Cramer

Soule’s noble act of compassion at Sand Creek is humbly conveyed in a letter to his mother included in the Denver Public Library Western History Collections: “I was present at a Massacre of three hundred Indians mostly women and children… It was a horrable scene and I would not let my Company fire.”

Refusing to participate, Soule and the men of Company D of the First Colorado, along with Cramer of Company K, bore witness to the incomprehensible. Chivington’s attack soon descended into a frenzy of killing and mutilation, with soldiers taking scalps and other grisly trophies from the bodies of the dead. Soule was a devoted abolitionist and one dedicated to the rights of all people. He stayed true to his convictions in the face of insults and even a threat of hanging from Chivington the night before at Fort Lyon. 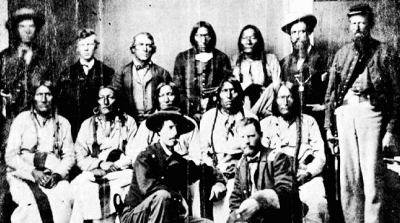 This rare photograph by an unknown photographer shows the ill-fated Cheyenne chief, Black Kettle, and a number of his associated at Camp Weld, on the outskirts of Denver. They had assembled there on September 28, 1864, for a peace council with Governor Evans and Colonel John M. Chivington, commander of the District of Colorado. Some of the identifications are uncertain. Pictured in the front row, kneeling, from left are: Major Edward W. Wynkoop, commander at Fort Lyon and later agent for the Cheyennes and Arapahoes; Captain Silas S. Soule, provost marshal, later murdered in Denver. Pictured in the middle row, seated, from left, are: White Antelope (or perhaps White Wolf), Bull Bear, Black Kettle, One Eye, Natame (Arapaho). Pictured in the back row, standing, from left are: Colorado militiaman, unknown civilian, John H. Smith (interpreter), Heap of Buffalo (Arapaho), Neva (Arapaho), unknown civilian, sentry. Another identification states that Neva is seated on the left and the Indian next to Smith is White Wolf (Cheyenne).
credit: Library, State Historical Society of Colorado // Indian Country Today

In the following weeks, Soule and Cramer wrote letters to Major Edward “Ned” Wyncoop, the previous commander at Fort Lyon who had dealt fairly with the Cheyenne and Arapaho. Both harshly condemned the massacre and the soldiers who carried it out. Soule’s letter details a meeting among officers on the eve of the attack in which he fervently condemned Chivington’s plans asserting “that any man who would take part in the murders, knowing the circumstances as we did, was a low lived cowardly son of a bitch.”

Describing the attack to Wynkoop, Soule wrote, “I refused to fire and swore that none but a coward would.” His letter goes on to describe the soldiers as “a perfect mob.”

This account is verified by Cramer’s letter. Detailing his own objections to Chivington, whom he describes as coming “like a thief in the dark,” Cramer had stated that he “thought it murder to jump them friendly Indians.” To this charge, Chivington had replied, “Damn any man or men who are in sympathy with them.”

In Soule’s account, he writes, “I tell you Ned it was hard to see little children on their knees have their brains beat out by men professing to be civilized.”

While few Americans – especially those living outside of Colorado – may know their names, Soule and Cramer are honored and revered by the descendants of the people they tried to save. According to David F. Halaas, former Colorado state historian and current historical consultant to the Northern Cheyenne, without their courage in disobeying Chivington’s orders and keeping their men from the massacre, “the descendants probably wouldn’t be around today,” and there would be no one to tell the stories.

The horrific descriptions of Soule and Cramer prompted several official inquiries into the atrocity. Both men also testified before an Army commission in Colorado as witnesses. While the officers and soldiers responsible escaped punishment, their testimony brought widespread condemnation upon Chivington, who defended the massacre for the rest of his life.

These investigations also ended the political career of the Colorado territorial governor, John Evans, who had issued two proclamations calling for violence against Native people of the plains, and for organizing the 3rd Colorado Cavalry Regiment in which Chivington was placed in command.

Sites of reverence and healing 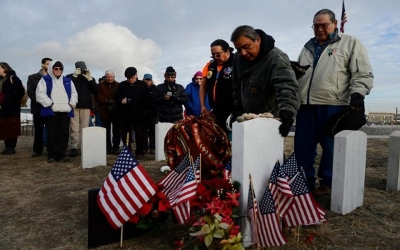 The Cheyenne and Arapaho will return to Denver this year to honor their ancestors and remember Soule’s and Cramer’s conscience and humanity. This will be done through an offering of prayers and blessings, along with the performance of honor songs.

On the third and final day of the healing run, they will gather for a sunrise ceremony at Soule’s flower-adorned grave at Denver’s Riverside Cemetery. The participants will then continue on to 15th and Lawrence Street in downtown Denver. There, a plaque is mounted on the side of an office building at the place where Soule was murdered on April 23, 1865. His death, for which no one was ever brought to justice, occurred only two months after he testified against Chivington before the Army commission.

Over the last few decades, Soule’s grave and place of death have been transformed into sacred sites of remembrance within a violent and traumatic frontier past.

The catastrophe of the Sand Creek Massacre is recognized by historians as among the most infamous events in the annals of the American West. Even now, it is the only massacre of Native people recognized as such by the U.S. government, with the land itself preserved as a national historic site for learning and reflection.

In Cheyenne and Arapaho stories, this event remains an ever-present trauma and persists as part of their cultural memory. In addition, it encapsulates the stark moment of betrayal against their ancestors and the theft of their lands.

The story of Soule’s and Cramer’s actions and their courage to say “no” to the killing of peaceful people at Sand Creek is an important chapter of U.S. history. I maintain that it is people like Soule and Cramer who truly deserve to be remembered through monuments and memorials, and can be a source for a different kind of historical understanding: one based not on abstract notions of justice and right, but upon the courage and integrity it takes to breathe life into those virtues.

On the 152nd anniversary of the Sand Creek Massacre, as we honor the memory of those who died at Sand Creek, may we also be inspired by the heroic actions of these two American soldiers.

[Dr. Billy J. Stratton is an associate professor in the Department of English where he teaches contemporary Native American and American literature, poetics, film studies, and writing. His critical, creative, and editorial work on such topics as contemporary American literature and culture, Native critical theory, oratory, and studies of the works of writers including, Cormac McCarthy, Gerald Vizenor, Nora Marks Daunehauer, and Chuck Palahniuk has appeared or are forthcoming in numerous books and journals including Arizona Quarterly, The Journal of American Culture, Wicazo-Sa Review, Studies in American Indian Literature, Rhizomes, Salon, and TIME.

Stratton's first book, 'Buried in Shades of Night' (2013), addresses Native American subjectivities within the context of the Indian captivity narrative genre, King Philip's War, and colonial American history. His latest projects include a critical assessment of the “fictions” of Stephen Graham Jones, which is now available from the University of New Mexico Press (2016), as well as a work of fiction set in Appalachian coal country--an excerpt from which, "Mending the Centaur," is was published in Cream City Review (39:1, 2015).

He has been instrumental in efforts to create dialogue at the University of Denver around the issue of the Sand Creek Massacre, and has edited and published several works on that theme. Additionally, he serves at DU as Special Advisor to the Chancellor and Provost on Native American Partnerships and Programs.]