The number of people deemed to be at risk for poverty and social exclusion is at 27.9 percent. 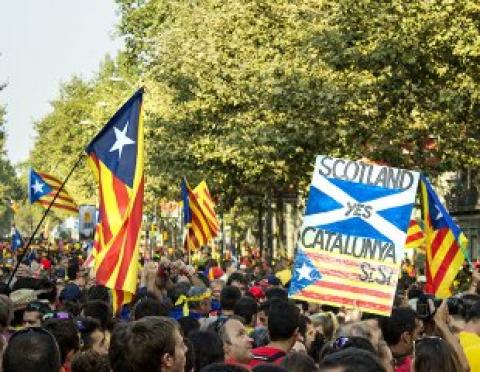 BARCELONA, SPAIN - SEPT. 11: People manifesting ingependence of Scotlandon and Catalonia at the strret of Barcelona during the National Day of Catalonia on Sept. 11, 2014 in Barcelona, Spain. , ONiONAstudio / Shutterstock.com

As Spanish Prime Minister Mariano Rajoy threatens to take over the autonomous region of Catalonia, it is becoming clearer even to casual observers who the bad guys are in this conflict. Generally, when one side is peaceful and seeks dialogue, and the other is committed to resolving the disagreement through force, repression, and violence — well, you get the picture.

The Spanish government’s argument that the October 1 referendum on independence was unconstitutional is not so determinative as they would like us to believe. As Vicente Navarro, who has written for many years on Spain’s incomplete transition to democracy, notes: the 1978 constitution was much more a product of the 36-year dictatorship than it was of the democracy that was struggling to be born. And Rajoy’s Popular Party (PP) in particular has deep roots in political forces and people who were part of the Franco dictatorship.

The anti-democratic character and fascist heritage of the PP government became glaringly evident when Rajoy sent thousands of troops into Catalonia in a failed attempt to stop people from voting. This was not, as he claimed, to enforce the law: the Spanish government could simply have allowed the vote and refused to recognize the result. Rather it was to crush the independence movement and the expression of their ideas by force; and hundreds of people were injured by the Civil Guard. The repression also included unprecedented censorship of the Internet, as well as of newspapers and radio. If Rajoy follows through with his threatened takeover of Catalonia, we will see more of this Francoist repression of basic civil rights and liberties.

As many have noted, the independence movement in Catalonia has deep roots — it goes back at least 300 years, and Catalans were denied even to the right to their language during the dictatorship. But there is another reason, besides the repression and infringements on Catalonia’s limited autonomy under the constitution, that it has flared up in recent years. That is Spain’s profound economic failure since the world financial crisis and recession of 2008–2009, and especially its impact on young people and the long-term unemployed, so many of whom have been left without a future in Spain. This is worth looking at in some detail, as the Spanish economy has lately been described in positive terms since it returned to economic growth four years ago.

First, the current state of the damage. Over the past year (from August), unemployment has averaged 18 percent, more than four times the level of the United States. And it would be a lot higher if not for about 1.7 million foreign nationals having left the country.

For 2016, about 43 percent of the unemployed were out of work for more than a year. In terms of finding employment, the International Monetary Fund (IMF) recently concluded that “prospects for this group are particularly grim.”

The number of people deemed to be at risk for poverty and social exclusion is at 27.9 percent.

Inequality has risen dramatically since 2008; the income of the top 20 percent is now 7.5 times that of the bottom 20 percent, the third worst in the European Union. As the IMF has noted, this is mainly because employment fell by 20 percent from 2008 to 2013, and lower-income groups were disproportionately among the victims of this collapse.

Furthermore, the majority of new jobs are temporary labor contracts, heightening insecurity even for those who are lucky enough to find a new job.

This is not a pretty picture. But the IMF — which is here representing the views of the European authorities and the Rajoy government — nonetheless appears to accept mass unemployment as the new normal. The Fund projects that the economy will reach its full potential output sometime in the next year. But unemployment will still be at about 16 percent. In other words, 16 percent unemployment is as good as it gets, it’s now being redefined as “full employment.” And youth unemployment is about double the overall unemployment rate. This is an abomination; no one who cares about the majority of people in Spain and especially the future of a generation of young people, should accept the policies that have wrecked the Spanish economy and continue to constrain the recovery of the labor market.

Of course, it doesn’t have to be this way. The yield on Spain’s 10 year bonds is just 1.6 percent — the same as its current rate of inflation. In other words, Spain can borrow long-term for free, at a real (inflation-adjusted) interest rate of zero. Pundits rant about Spain’s public debt, but when a government can lock in borrowing at zero real interest rates, it’s a good time for public investment that can create jobs and increase the productivity of the economy. Productivity growth has been very weak during this recovery.

But the Popular Party government, in collaboration with the European authorities, has a very different vision of “progress.” Together, they are committed to further budget tightening, even though the economy is already slowing. They are also worried about backsliding with respect to the “structural reforms” that they argue are best for increasing employment and the efficiency of the economy.

Part of the theory of the austerity that has been implemented since 2010 was that since Spain could not devalue its currency (the euro), it would have to undergo an “internal devaluation.” This means that mass unemployment and other pressures (including labor law changes) would push down wages enough so that Spain could be more competitive, and increase exports, even with a euro that had previously been overvalued for its economy. Spain has certainly increased its exports since the bottom of the depression. But since the economic recovery began four years ago, imports have also increased, and so net exports (the difference between exports and imports) have not contributed anything to the recovery. It is therefore difficult to argue that Spain has adjusted its economy so as to produce a new growth model.

The other argument for austerity was that tightening the budget and implementing structural reforms would lower interest rates and payments on Spain’s public debt, by restoring market confidence. But in fact Spain’s interest rates dropped as a result of drastic changes in the policy of the ECB: in 2012 the ECB decided to basically guarantee Spanish and Italian bonds; it has lowered short-term interest rates and also began quantitative easing in March 2015 to lower long-term rates and provide a monetary stimulus.

So there is little in the data that would indicate that Spain’s austerity “worked.” On the contrary, not only is the economy still a wreck for millions of Spain’s residents, the recovery that has occurred owes much to the reduction of austerity and the implementation of a small stimulus that needs to be expanded in order to move toward full employment.

Under these conditions, it is no wonder that many Catalans think they could do better economically as an independent country. Their economic problem is similar to that of most of the people living in the eurozone — including the rest of Spain, France, Italy, and Greece. The European authorities, and those governments who either choose to go along with them or are forced to do so (as in Greece), are essentially committed to mass unemployment — as well as a number of regressive economic reforms — for the foreseeable future.

It is in this deep structural and practical sense that separatist movements, as well as those who want to leave the eurozone or the European Union, have a real economic basis in the failed economic policies of the European authorities and most eurozone governments. So, too, has the increased voting share of the far right in countries such as France, the Netherlands, and Germany. It remains to be seen whether Europe’s elite will abandon its attachment to failed economic policies before these centrifugal forces grow stronger.

Mark Weisbrot is co-director and co-founder of the Center for Economic and Policy Research. He is co-author, with Dean Baker, of "Social Security: The Phony Crisis" (University of Chicago Press, 2000), and has written numerous research papers on economic policy. He is also president of Just Foreign Policy.