books Right Hooks: Trump and the Anatomy of the Alt-Right

The book traces the myriad links between the far right, from Fox News, Tea Party activists, militia supporters, new media trolls, White Nationalists, resurgent Klan members and self-proclaimed Nazis to Donald Trump, where each piggybacks on the rest in honing messages and growing their influence. While the author spends little time referencing left and progressive forces opposing the right's resurgence, his work is exhaustive in researching the phenomena. 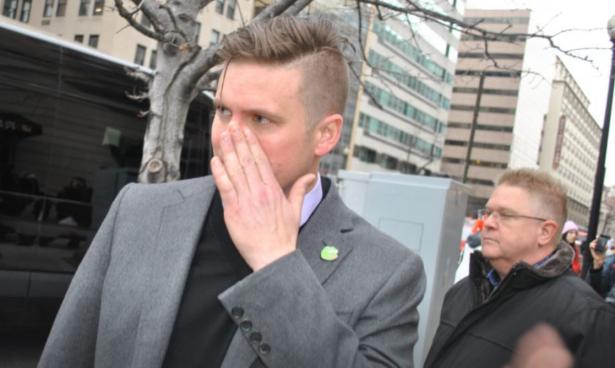 "Alt-right" figurehead Richard Spencer after being punched in the face at random, Washington, D.C., Jan. 20, 2017., Credit:

Think of this book as a basket of deplorables. It’s thick on illuminating descriptions of renascent white nationalists, gun-enamored militia poseurs, conspiracy-theory mongers, Ku Klux Klansmen and women, Christian Identitarians and proto-Nazis benefitting from and legitimized by the sordid presidency of Donald Trump. It’s thin on explaining why such phenomena persist or have arisen as political thuggery in 21st-century America.

Alt-America: The Rise of the Radical Right in the Age of Trump 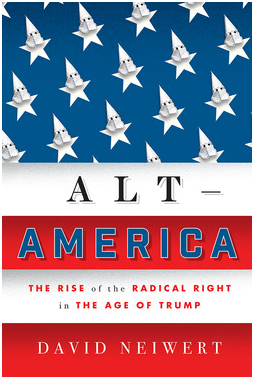 Journalist David Neiwert’s Alt-Right: The Rise of the Radical Right in the Age of Trump is certainly required reading. He’s a widely respected expert on the American far right, author of five previous books on the right and repression of immigrants, as well as a frequent guest on CNN and MSNBC and a contributor to the Washington Post. The book’s breadth of detail is exhaustive and almost singular in focusing on the racist far-right movement that has often been presumed dead, but got a jolt of growth hormones from the Trump campaign, who mainstreamed what Neiwert calls their “eliminationist rhetoric” as applied to immigrants, people of color and Jews.  Some even refer to Trump as “Glorious Leader,” language the author doesn’t harp on but that harkens back to the fuhrerprinzip, or notion of the leader as above all law. cialis 20mg Neiwert also notes the munificent funding of far-right causes from wealthy grandees like the Coors family and the Koch brothers.

Where Neiwert is at his best is in charting and quantifying the mainstreaming of white-nationalist ideas, where even Nazis were free to join and lead Tea Party efforts. Teabagger ideology was broadcast not just by lunatics like Alex Jones, obvious racists like David Duke and pervasive social-media trolls, but by seemingly respectable Fox News. The Oathkeepers, in effect a revived ’90s-style militia, could masquerade and be accepted as “just another community-watch organization.”

Some on the “alt-right” refer to Trump as “Glorious Leader,” language that harkens back to the fuhrerprinzip, or notion of the leader as above all law.

Trump’s condemnation of “dangerous Mexicans” and his fancied immigrant crime wave won him unwavering support from white nationalists, including Nazi wannabe Andrew Anglin, who wrote on his website “The Daily Stormer” (named after a fanatical 1930s Nazi newspaper), “I urge all readers of this site to do whatever they can to make Donald Trump president.” (Luke O’Brien also ably profiles Anglin in the December 2017 Atlantic.) Peter Brimelow’s white-nationalist website, vdare.comfollowed suit, headlining “We Are All Donald Trump Now,” while Richard Spencer’s Radix Journal, in acknowledging it considered Trump “a troll,” claimed he was their troll. “We need someone who can break open public debate,” Spencer wrote. “The fact that Trump himself is part of this same farce is utterly irrelevant.”

“White people are realizing they are becoming strangers in their own country and they do not have a major political voice speaking for them,” Rachel Pendergraft, a national organizer of the Knights Party of the Ku Klux Klan, told Neiwert. “Trump is one example of the alternative-right candidate [whom] Knights Party members and supporters have been looking for. And we feel that through continued grassroots mobilization, more candidates will arise who will speak out for white Christian America.”

As Neiwert commented, “All the long-suppressed hatreds and resentments, all the deep anger and black fears about the nation and the changing shape of American society, came bubbling up and bursting into public view in predictably ugly ways. Trump’s rhetoric seemingly gave permission for the unleashing of an eliminationist flood.” Meanwhile, the right-wing media set the scene by “creating a self-affirming community.”

Alt-Right: The Rise of the Radical Right in the Age of Trump is a thorough review. It’s not the first work to posit the connection between Trump and the mainstreaming of white nationalist movements; Neiwert and Sarah Posner anticipated some of the book’s revelations in an October 2016 article in Mother Jones, as did Andrew Marantz’s October 2017 New Yorker profile of fascist shock-jock and virulent Jew-hater Mike Enoch. But Neiwert’s book masterfully exposes so many of the interstices between Trump, the far-right nationalists and the toxic manipulators of social media, each feeding off the others.

The book, however, never tries to give a theoretical explanation of why such banal ideas fester. Why, for example, does a movement so tied to Christian Identitarianism ignore Jesus’s key injunction that “what you do unto the least of them, you do unto me?” Why the fetishistic clinging to a “white” identity and a “white European” heritage? Neiwert does digress briefly to explore a useful distinction by the psychologist Robert Altmeyer between authoritarian “followers” and “dominators,” the former looking only for order and peace, while the latter lust for power. That might be the beginning of a useful discussion, but it would be aided by referring to some standard works on authoritarianism, such as Theodor Adorno’s The Authoritarian Personality and Wilhelm Reich’s The Mass Psychology of Fascism.

For all its keen attention to right-wing movements—much of Neiwert’s sourcing is augmented by the excellent work of the Southern Poverty Law Center — the book is decidedly apolitical. It does not acknowledge a left-wing movement arising precisely as resistance to Trump and the far right. It rejects the idea of physical opposition to a mobilized far right, despite a proud leftist history of such resistance. Nor does it give credence to the idea that mainstream liberalism has failed, making great cultural strides since the 1970s but being beaten back politically and economically by international capital. Trump may be a false solution to a real problem, but Neiwert doesn’t acknowledge that capital, its depredations and its enablers in the two major parties are the cause of that problem.

Neiwert’s only attempt at a political solution to an emboldened far right is for liberals — he makes no mention of a left — to talk nicely and persuasively to right-wing neighbors and associates, starting with family members at the Thanksgiving table. If only it were that simple.

Author David Neiwert is a journalist and author and an acknowledged expert in American right-wing extremism. He has appeared on Anderson Cooper 360, CNN Newsroom, and The Rachel Maddow Show. His work has also appeared in the American Prospect, the Washington Post, MSNBC, Salon, and other publications. His previous books include The Eliminationists: How Hate Talk Radicalized the American Right, Strawberry Days: How Internment Destroyed a Japanese-American Community, as well as And Hell Followed With Her: Crossing the Dark Side of the American Border, which won the 2014 International Latino Book Award.

[Essayist Michael Hirsch is a longtime labor and political writer. A member of the National Writers Union and a staff writer with the United Federation of Teachers for 13 years until retiring in 2013, he has also worked in communications for three other unions, served on the executive boards of one more and taught sociology and labor education in Massachusetts, Indiana and New York. A former steelworker (in Indiana), his writing has appeared in The New Statesman, Crain's NY Business, The Village Voice, NY Observer, New Politics, Labor Notes, Jacobin,  Logos, City Limits, The Guardian, Working USA, Jacobin, New Labor Forum and other venues. He also reviews books for The Indypendent, many of which have been featured on Portside.  He is on the editorial boards of New Politics and Democratic Left (DSA).]

The monthly Indypendent describes itself as "a Free Paper for Free People". While the paper is distributed without cost in New York City's five boroughs, it is also reader supported. Contributions and subscriptions are welcome. Information on the paper and a note on contributions are available HERE.