Yes, Your Ancestors Probably Did Come Here Legally — Because 'Illegal' Immigration is Less Than a Century Old - No Visas Were Required Until 1924

There were no federal laws concerning immigration until 1924. When a massive influx of new immigrant groups came at the turn of the 20th century — Italians from Southern Europe and Jews from Eastern Europe — a backlash developed. A new law required for the first time that immigrants to the U.S. have visas, introducing the concept of “having papers” to American immigration policy. 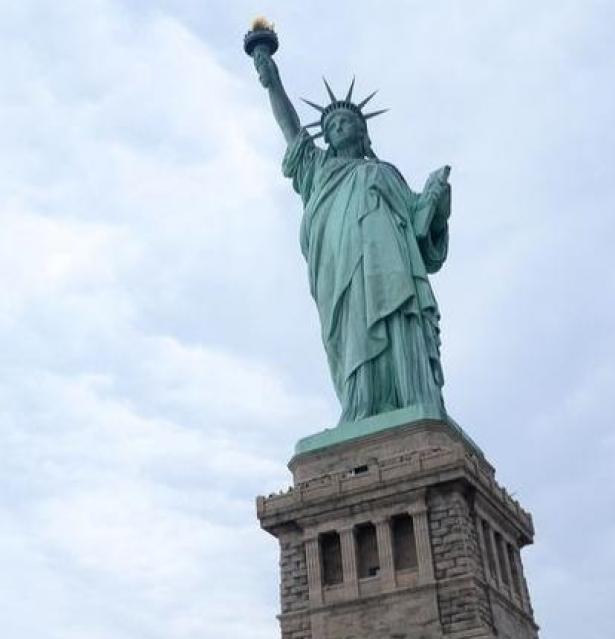 The Statue of Liberty, designed and built in France, was assembled on Bedloe's Island in 1886, six years before Ellis Island opened nearby as an immigrant processing facility.,Los Angeles Times

When Nathalie Gumpertz arrived in New York in 1858, she was 22, single and ready to build a life in her new country. Without thinking twice about her legal status, she got off the boat, made her way to the Lower East Side (then known as Klein Deutschland, or "Little Germany," due to the preponderance of German immigrants in the neighborhood) and eventually married, had four kids and settled at 97 Orchard St., the historic tenement house that is now the heart of the Tenement Museum, where I serve as president.

More than six decades later, in 1925, Rosaria Baldizzi arrived in New York to join her husband Adolfo at the same building, 97 Orchard. Baldizzi had a cloud hanging over her head that would remain there for the next two decades, one that Gumpertz never worried about: She had not entered the U.S. legally, and therefore had to worry about possible deportation.

What happened to make these two women's experiences so different? In the years between their arrivals, "illegal" immigration was invented.

For those clamoring for a wall against immigrants, it may come as a surprise to learn that there were no federal laws concerning immigration until well into the history of the United States. When people say "my ancestors came here legally," they're probably right. For the first century of the country's existence, anyone could land here and walk right off the boat with no papers of any kind, just as Gumpertz did. Coming here "illegally" did not even exist as a concept.

There were no federal laws concerning immigration until well into the history of the United States.

The first federal general immigration law was enacted in 1882. It prohibited from entering the U.S. "any convict, lunatic, idiot, or any person unable to take care of himself or herself without becoming a public charge." In other words, unless you were physically or mentally incapable of taking care of yourself, you were in — unless you were Chinese.

That's because the first sweeping federal restriction on immigration also came in 1882, in the form of the Chinese Exclusion Act. Troubled by the influx of Chinese workers — who helped build the transcontinental railroads, among other things — Congress enacted a wholesale ban on their further immigration that year. To enforce the ban, a bureaucracy had to be created, leading in 1891 to the establishment of the federal Bureau of Immigration, the first body charged with enforcing federal immigration law.

Beyond these restrictions, however, federal immigration laws remained relatively lax: If you were an able-bodied, non-Chinese person, you could come "legally" for several more decades. You didn't have to speak a word of English or be literate in any language at all. In fact, it was not until 1917 that Congress required that immigrants pass a literacy test, and even then they could pass in anylanguage, not just English.

When a massive influx of new immigrant groups came at the turn of the 20th century — Italians from Southern Europe and Jews from Eastern Europe, largely — a backlash began to build. In 1924, President Coolidge signed into law the National Origins Act, the primary aim of which was to severely restrict the flow of immigrants from Southern and Eastern Europe. The new law required for the first time that immigrants to the U.S. have visas, introducing the concept of "having papers" to American immigration policy.

The concept of being an "illegal" immigrant pretty much dates back to 1924 — less than a century ago. For most of American history, coming here "legally" meant next to nothing. And almost none of those who came here "legally" a century ago would make it across the border under today's far more stringent standards.

Baldizzi would not become "legal" until a special immigration provision was enacted to offer amnesty to mainly European immigrants who arrived without proper documentation after 1921, who had established families, and who had already lived in the U.S. for seven years. She applied for legal status under the new policy and earned her citizenship three years later, in 1948. Only then, for the first time in more than two decades, could she stop worrying about her immigration status.

What constitutes "legal" immigration has been a moving target throughout our history. Americans who crow about their law-abiding ancestors may want to learn a little more about immigration history before wishing for a return to the "good old days" — when pretty much anyone could come to the U.S. "legally."

[Kevin Jennings is president of the Tenement Museum. He served as assistant deputy secretary of Education under President Obama from 2009 to 2011 and co-founded the Gay, Lesbian and Straight Education Network in 1990.]