Ex- Bush official confesses. President George W. Bush would have ordered the war even without United Nations support. "That led to a war that resulted in catastrophic losses for the region and the United States-led coalition, and that destabilized the entire Middle East". This should not be forgotten, since the Trump administration is using much the same playbook to create a false impression that war is the only way to address the threats posed by Iran. 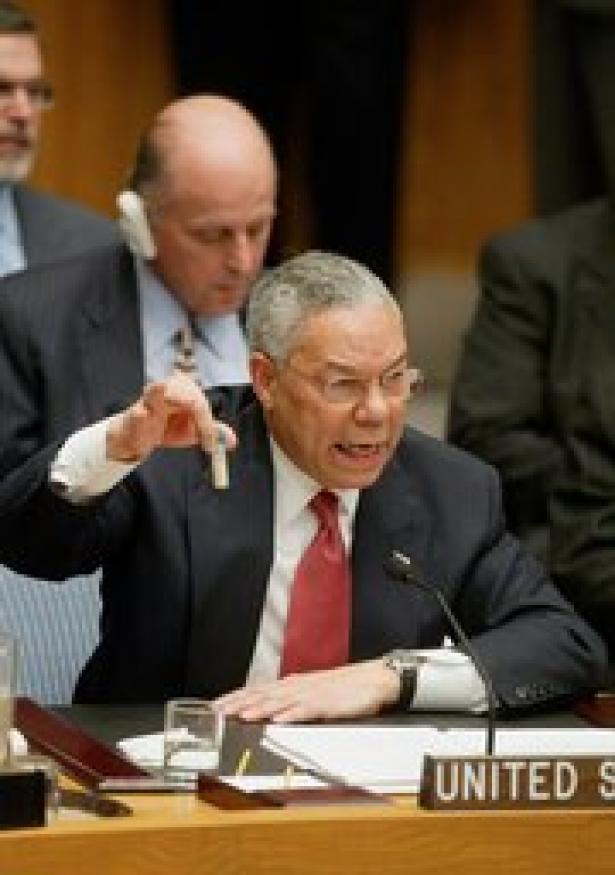 Colin L. Powell, the former secretary of state, made a case for military action against Iraq to the United Nations Security Council on Feb. 5, 2003. Now the Trump Administration is gearing up for a new war against Iran., Credit: James Estrin/The New York Times

Fifteen years ago this week, Colin Powell, then the secretary of state, spoke at the United Nations to sell pre-emptive war with Iraq. As his chief of staff, I helped Secretary Powell paint a clear picture that war was the only choice, that when “we confront a regime that harbors ambitions for regional domination, hides weapons of mass destruction and provides haven and active support for terrorists, we are not confronting the past, we are confronting the present. And unless we act, we are confronting an even more frightening future.”

Following Mr. Powell’s presentation on that cold day, I considered what we had done. At the moment, I thought all our work was for naught — and despite his efforts we did not gain substantial international buy-in. But polls later that day and week demonstrated he did convince many Americans. I knew that was why he was chosen to make the presentation in the first place: his standing with the American people was more solid than that of any other member of the Bush administration.

President George W. Bush would have ordered the war even without the United Nations presentation, or if Secretary Powell had failed miserably in giving it. But the secretary’s gravitas was a significant part of the two-year-long effort by the Bush administration to get Americans on the war wagon.

That effort led to a war of choice with Iraq — one that resulted in catastrophic losses for the region and the United States-led coalition, and that destabilized the entire Middle East.

This should not be forgotten, since the Trump administration is using much the same playbook to create a false impression that war is the only way to address the threats posed by Iran.

Just over a month ago, the United States ambassador to the United Nations, Nikki Haley, said that the administration had “undeniable” evidence that Iran was not complying with Security Council resolutions regarding its ballistic missile program and Yemen. Just like Mr. Powell, Ms. Haley showed satellite images and other physical evidence available only to the United States intelligence community to prove her case. But the evidence fell significantly short.

It’s astonishing how similar that moment was to Mr. Powell’s 2003 presentation on Iraq’s weapons of mass destruction — and how the Trump administration’s methods overall match those of President Bush and Vice President Dick Cheney. As I watched Ms. Haley at the Defense Intelligence Agency, I wanted to play the video of Mr. Powell on the wall behind her, so that Americans could recognize instantly how they were being driven down the same path as in 2003 — ultimately to war. Only this war with Iran, a country of almost 80 million people whose vast strategic depth and difficult terrain make it a far greater challenge than Iraq, would be 10 to 15 times worse than the Iraq war in terms of casualties and costs.

If we want a slightly more official statement of the Trump administration’s plans for Iran, we need only look at the recently released National Security Strategy, which says, “The longer we ignore threats from countries determined to proliferate and develop weapons of mass destruction, the worse such threats become, and the fewer defensive options we have.” The Bush-Cheney team could not have said it better as it contemplated invading Iraq.

The strategy positions Iran as one of the greatest threats America faces, much the same way President Bush framed Saddam Hussein’s Iraq. With China, Russia and North Korea all presenting vastly more formidable challenges to America and its allies than Iran, one has to wonder where the Trump team gets its ideas.

Though Ms. Haley’s presentation missed the mark, and no one other than the national security elite will even read the strategy, it won’t matter. We’ve seen this before: a campaign built on the politicization of intelligence and shortsighted policy decisions to make the case for war. And the American people have apparently become so accustomed to executive branch warmongering — approved almost unanimously by the Congress — that such actions are not significantly contested.

It’s a vivid reminder of Vice President Cheney’s desperate attempts in 2002-03 to conjure up evidence of Saddam Hussein’s relationship with Al Qaeda from detainees at Guantánamo Bay. It harks back to the C.I.A. director George Tenet’s assurances to Mr. Powell that the connection between Saddam Hussein and Osama bin Laden was ironclad in the lead-up to his United Nations presentation. Today, we know how terribly wrong Mr. Tenet was.

Today, the analysts claiming close ties between Al Qaeda and Iran come from the Foundation for Defense of Democracies, which vehemently opposes the Iran nuclear deal and unabashedly calls for regime change in Iran.

It seems not to matter that 15 of the 19 hijackers on Sept. 11 were Saudis and none were Iranians. Or that, according to the United States intelligence community, of the groups listed as actively hostile to the United States, only one is loosely affiliated with Iran, and Hezbollah doesn’t make the cut. More than ever the Foundation for Defense of Democracies seems like the Pentagon’s Office of Special Plans that pushed falsehoods in support of waging war with Iraq.

The Trump administration’s case for war with Iran ranges much wider than Ms. Haley’s work. We should include the president’s decertification ultimatum in January that Congress must “fix” the Iran nuclear deal, despite the reality of Iran’s compliance; the White House’s pressure on the intelligence community to cook up evidence of Iran’s noncompliance; and the administration’s choosing to view the recent protests in Iran as the beginning of regime change. Like the Bush administration before, these seemingly disconnected events serve to create a narrative in which war with Iran is the only viable policy.

As I look back at our lock-step march toward war with Iraq, I realize that it didn’t seem to matter to us that we used shoddy or cherry-picked intelligence; that it was unrealistic to argue that the war would “pay for itself,” rather than cost trillions of dollars; that we might be hopelessly naïve in thinking that the war would lead to democracy instead of pushing the region into a downward spiral.

The sole purpose of our actions was to sell the American people on the case for war with Iraq. Polls show that we did. Mr. Trump and his team are trying to do it again. If we’re not careful, they’ll succeed.

[Lawrence Wilkerson, a retired Army colonel who teaches at the College of William & Mary, was chief of staff to Secretary of State Colin Powell from 2002 to 2005.]