As Long As Rights Are Trampled, There Will Be Forced Migration

We often debate the pros and cons of welcoming immigrants here. We seldom consider the U.S. impact on the countries they leave. Ultimately, reducing the flow of refugees requires a just foreign policy, one that values people over profits. You can be sure: As long as rights are trampled, voices are silenced, and lives are cut short — there will be forced migration. Even at great risk. Even without parents. Even with a wall.

February 22, 2018 Roy Bourgeois and Margaret Knapke Foreign Policy in Focus
Printer friendly
As Long As Rights Are Trampled, There Will Be Forced Migration Published February 22, 2018 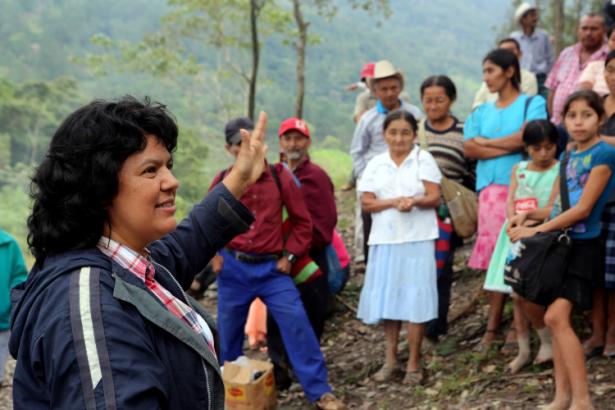 Jorge García is no “bad hombre.” Before being deported to Mexico in mid-January, he was a hard-working, tax-paying landscaper in Michigan. He’s also a husband and father — although now an absent one.

Many deportees — most, like García, good people — return to countries they no longer know, some of them unable to speak the language. Others are thrust into life-threatening situations. Families and communities fracture; some deportees die.

In 2008, Laura was an undocumented Mexican mother of three living in Texas. Actually, she did have one U.S. “paper” — a protection order issued against her violent ex-husband, who’d subsequently been deported. He said he’d kill her if she returned to Mexico.

The following year, Laura was detained after a traffic stop. She told the police officer, and later a Border Patrol agent, her very reasonable fears. But reportedly she was pressured into signing a “voluntary return.” Her ex kept his word, within days of her deportation back to Mexico.

It’s an ongoing debate: What do U.S. citizens owe undocumented immigrants, if anything? Do DACA “Dreamers” deserve special consideration? Should TPS recipients lose their “temporary protected statuses” if the conditions in their home countries are still dangerous? What if sending them home would rupture families or disrupt the U.S. economy?

What have immigrants brought to our country — what strengths and gifts, and what liabilities?

We want to add this critical question: How has U.S. foreign policy affected their countries? Refugees walk hot desert miles, ride atop trains, and entrust themselves to smugglers for a chance at a safer, less desperate life. Has our country helped create the extreme conditions these migrants are fleeing?

We believe the U.S. training of Latin American militaries has contributed mightily to this exodus, with the School of the Americas (SOA) being a prime example. The SOA was established in 1946 to train Latin American military personnel. By 2000, it had instructed more than 60,000 soldiers in combat, counterinsurgency, psychological operations, and more.

Although the SOA claimed its training upheld democratic values, human rights reports told a different story. In 2001 — following a public, editorial, and congressional outcry — the SOA was “closed” and rebranded as the Western Hemisphere Institute for Security Cooperation (WHINSEC).

Without question, democracy and human rights are still under siege in many Latin American countries. Rural communities, often Indigenous, are jeopardized when their lands look promising to outsiders for business ventures — in logging, mining, hydropower, tourism, or agribusiness.

Consider, for example, Honduras — the Central American nation that just reinauguratedconservative President Juan Orlando Hernández, the declared winner of a fiercely disputedNovember 26 election. The OAS’s call for an electoral re-do was rejected, and thousands of protesters filled the streets of Tegucigalpa during the January 27th ceremony.

The election drama takes place against a backdrop of violence against human rights defenders.

Indigenous feminist and environmentalist Berta Cáceres cofounded the Civic Council of Popular and Indigenous Organizations of Honduras (COPINH) in 1993. In recent years, COPINH has opposed the building of the Agua Zarca hydroelectric dam, which was begun in violation of the Lenca people’s rights and threatens their water and livelihood. They’ve fought the dam in court and blockaded access roads.

Cáceres succeeded in drawing international scrutiny to the controversial project; it stumbled in 2013 when a builder and a funder withdrew. In 2015, she won the Goldman Environmental Prize for bravely “protecting vulnerable people and ecosystems.” She’d received many death threats.

Gunmen killed Cáceres in her home the following year.

Berta was not alone in her courage. According to Global Witness’s January 2017 report: “123 land and environmental activists have been murdered in Honduras since the 2009 coup.” LGBTQ persons and journalists and human rights defenders suffer repression, too.

His reforms were going in the right direction for most Hondurans. According to researchers Jake Johnston and Stephan Lefebvre at the Center for Economic and Policy Research, during Zelaya’s brief tenure, “Poverty and extreme poverty rates decreased by 7.7 and 20.9 percent respectively.” After his ouster, those rates rebounded.

In early September 2010, the post-coup government granted 41 dam concessions — many of them in territories belonging to Indigenous people, without the prior, “good faith” consultation that is their right. Agua Zarca is one.

The grim reality: Governments and their militaries, often trained and subsidized by the United States, have skewed the distribution of wealth and power in many Latin American nations.

According to figures at the Security Assistance Monitor, Honduras received over $100 million in U.S. “security aid” from 2009 to 2017. Then, two days after the flawed Honduran presidential election in November — defying fact and reason — the U.S. State Department certified that the Honduran government supports human rights, making it eligible for more aid.

The Committee of Families of the Detained and Disappeared of Honduras (COFADEH) reports that at least 30 people have been killed since the November election — most of them opponents of President Hernández, and most killed by the military police.

But Honduras’s democratic opposition is not going away. COPINH has called “for a deepening of national mobilization against fraud and dictatorship. The more they repress, the more we struggle and organize.”

Hondurans in the U.S.

The Department of Homeland Security (DHS) reported in 2016 that “more families and unaccompanied children are fleeing poverty and violence in Central America” and trying to reach the United States. This isn’t surprising, given the profit- and military-driven upheavals mentioned above.

Natural upheavals have forced migration, too, including Hurricane Mitch in the autumn of 1998 and earthquakes in El Salvador in 2001. Hundreds of thousands of Central Americans sought refuge in the United States after those events, qualifying for Temporary Protected Status.

Now, under the Trump administration, DHS has set January 5, 2019 and September 9, 2019deadlines for Nicaraguans and Salvadorans, respectively, who must transition out of their TPS by then.

Meanwhile, officials are still deliberating the fate of Honduran TPS holders, claiming they lack “definitive information regarding conditions on the ground compared to pre-Hurricane Mitch.” Hondurans could find their TPS ending on July 5, 2018, or possibly extended.

An observation regarding those elusive “conditions on the ground”: The ability of the majority of Hondurans to recover from Mitch, even 20 years later, is inseparable from the economic justice issues we’ve touched upon. And those, in turn, depend upon recovering real democracy in Honduras.

SOA Watch encourages actions in solidarity with the people of Honduras. Activists have rallied around a bill called the Berta Cáceres Human Rights in Honduras Act, which seeks “to withhold U.S. funds from Honduran police and military in the name of human rights.”

Other policies that might help include a “clean” DREAM Act — one that will not make life more dangerous and difficult for immigrants who aren’t Dreamers.

Our country has played an often disastrous, deadly role in Latin America. We can just begin to make amends to our southern neighbors by showing refugees respect, hospitality, and security.

Ultimately, reducing the flow of refugees requires a just foreign policy, one that values people — and what Cáceres called “our Mother Earth” — over profits. You can be sure: As long as rights are trampled, voices are silenced, and lives are cut short — there will be forced migration.

Even at great risk. Even without parents. Even with a wall.