On Sunday, a statue of the democratic hero, Orlando Letelier, was unveiled on Washington’s stately Massachusetts Avenue, near the spot where Letelier was killed in a 1976 car bombing — an assassination ordered by Chilean dictator Augusto Pinochet. Ronni Karpen Moffitt, a 25-year-old American co-worker whom Letelier had been giving a ride, also was killed in the attack, which became a rallying point for human rights advocates. 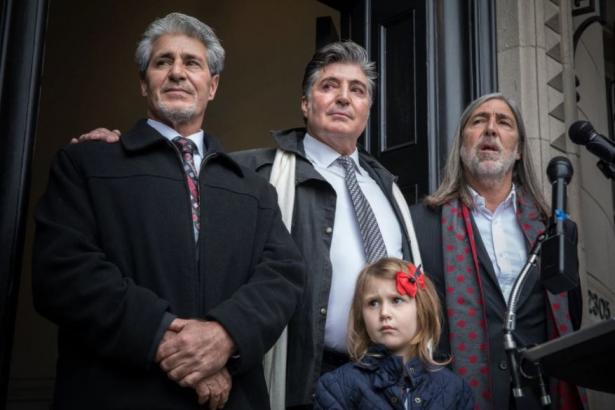 From left, Francisco, Cristian and Juan Pablo Letelier, along with Cristian’s daughter, Nicolette, attend the unveiling of a statue of their father, assassinated Chilean diplomat Orlando Letelier. , Evelyn Hockstein for The Washington Post

As anger at white-supremacist violence and a debate over Confederate monuments gripped the United States this past August, a group of plotters met at the Chilean ambassador’s residence in Washington.

A former aide to Sen. Ted Kennedy (D-Mass). A reporter and a filmmaker. Researchers from a progressive think tank. And a Chilean ambassador. They wanted a lasting counterpoint at a time when America, and the world, needed one.

On Sunday, a statue of their democratic hero, Orlando Letelier, was unveiled on Washington’s stately Massachusetts Avenue, near the spot where Letelier was killed in a 1976 car bombing — an assassination ordered by Chilean dictator Augusto Pinochet. Ronni Karpen Moffitt, a 25-year-old American co-worker whom Letelier had been giving a ride, also was killed in the attack, which became a rallying point for human rights advocates.

“It’s coming full circle here. It’s putting him back on this piece of Washington where he belongs,” said Sarah Anderson, global economy director at the Institute for Policy Studies, where Letelier and Moffitt worked when they were killed. And unlike with statues of Robert E. Lee and other Confederate leaders, “Orlando and Ronni were on the right side of history. I don’t see these monuments ever coming down.”

[This was not an accident. This was a bomb.]

The attack, masterminded by an American ally, brought terrorism to the U.S. capital in dramatic and tragic fashion. Letelier’s car exploded in Sheridan Circle, named after Union general Philip Sheridan, who is commemorated atop a towering horse on a pedestal there.

A long-classified CIA analysis, released by the Obama administration in September 2016 on the 40th anniversary of the bombing, cited “convincing evidence that President Pinochet personally ordered his intelligence chief to carry out the murder.”

On Sunday afternoon, a few doors away from the site of the bombing, scores of friends and loved ones gathered to see the statue unveiled in front of the Chilean ambassador’s residence.

After losing a father and a sister, surviving relatives of Letelier and Moffitt have found family in one another over the decades — and inspiration in what public good came from their personal tragedies.

Cristian Letelier, an actor in California, stood with two of his brothers under the Chilean flag, their father’s kind face looking up and in their direction. As a lone guitarist sang “Gracias a la Vida” — “Thanks to Life — Cristian’s eyes reddened and his 5-year-old daughter, Nicolette, climbed up into his arms to give him a hug.

“We used to sleep up on the third floor,” said one of the brothers, Chilean Sen. Juan Pablo Letelier, looking up toward his old bedroom in the residence.

His father had been ambassador to the United States under Chile’s socialist leader Salvador Allende. He also served as a government minister back home and, after Allende was overthrown, became a political prisoner. International pressure helped get Letelier released, and he moved to Washington, where he organized international opposition to Pinochet and worked to advance the Institute for Policy Studies’ economic advocacy.

He also was a dad.

“We are all older than he was when he died,” said Francisco Letelier, another son and a Los Angeles artist, who created a set of murals in honor of his father and Moffitt two years ago. The Institute for Policy Studies has for decades given a human rights award in their honor, and there is great pride among Letelier’s sons, three of whom traveled to Washington on Sunday, that their father’s memory has helped drive change around the world.

[A car bomb killed Orlando Letelier on Embassy Row 40 years ago. A mural by his son marks the tragedy and the progress it inspired.]

“We’re still human beings. We have to make the bust of the person,” Francisco said. But what’s truly important, he added, is the message that has emerged and been cultivated out of the tragedy: “The world can be better.”

Francisco and other family members weighed in on the choice of Baltimore sculptor Barry Johnston, who created a memorial plaque placed in Sheridan Circle years before.

Moffitt’s brother, attorney Michael Karpen, traveled to the ceremony from New Jersey. There’s a monument to his sister in Chile, he said.

Moffitt was 25, married just months before her death.

“She was a young Jewish woman, an American, assassinated in the U.S.,” Karpen said. “She did a lot in this life.”

Letelier’s sons have been generous to Karpen and his family for decades. “I think about them all the time,” he said. “They’re like my brothers.”

Chile’s current ambassador, Juan Gabriel Valdés, was supposed to be riding with Letelier, Moffitt and Moffitt’s husband when the bomb went off that day. He, however, had decided to stay home with his children.

Valdés was a key force in getting the statue project going and in getting the sculpture in place before his own departure, which is expected soon with a new Chilean government.

Memories are not forged “without pain,” Valdés said, pointing to the example Letelier set in his life and death for the unyielding pursuit of democratic ideals.

John Dinges, who was working as a contract reporter for The Washington Post in Santiago, Chile, at the time of the killings, wrote two books on the assassination of Letelier and other Chileans.

“It’s just an amazingly loving moment,” Dinges said of the unveiling. Chile, where a dictatorship was once supported by the United States, is now a democracy where human rights are respected, he said. Letelier, even in bronze, is “looking toward the future.”

John Cavanagh, director of the Institute for Policy Studies, said he was so satisfied with the memorial efforts at the 40th anniversary in 2016 that he wasn’t sure what a physical statue would add.

White supremacists carried torches toward a Thomas Jefferson statue, chanting “Jews will not replace us!” They said they were there to oppose the planned removal of another towering monument, to Lee, before a Nazi sympathizer rammed his car into a crowd, killing counterprotester Heather Heyer.

Letelier came out “to fight for democracy, and ultimately that democracy won,” Cavanagh said. “He gave his life in that struggle for democracy and human rights. . . . We need statues to remind ourselves, and our children, that we can be inspired by people like that.”

[Michael Laris writes about the transformation of the U.S. transportation system. He previously covered government accountability and was a reporter based in Beijing. Follow @mikelaris ]