Dispatches from the Culture Wars - All Rights Reserved Edition 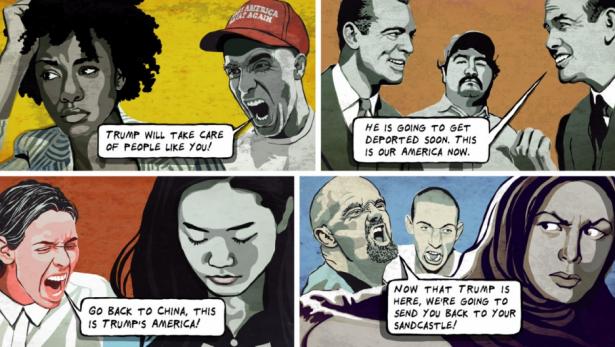 The Starbucks Arrests and the Toll of Routine Bias

Yes, this kind of thing happens all the time. But it might happen less if more people pay attention to how black men and women have responded on social media, sharing their own similar experiences and related anxieties, and explaining how they feel forced to act in most places of business.

They Spewed Hate. Then They Punctuated It With the President’s Name.

Nearly every metric of intolerance in the US has surged over the past 18 months, from reported anti-Semitism and Islamophobia to violent hate crimes based on skin color, nationality or sexual orientation.

The Notorious Book that Ties the Right to the Far Right

The enduring popularity of the racial-dystopian novel "The Camp of the Saints" sheds light on nativists' historical opposition to immigration.

A History of Alienation

By Martin Jay
March 14, 2018
Aeon
In the postwar period it was understood to be the fundamental malaise of modern life. Why aren’t we ‘alienated’ any more?

'Thoughts Are Not Working': High School Students Walk Out on 19th Anniversary of Columbine to Protest Gun Violence

By Clark Mindock
April 20, 2018
The Independent

'The fact of the matter is this movement isn't going to peter out because gun violence isn't going anywhere.'