Kanye shrugs; Peterson sells in; Campus capers; Court joins the attack on democracy; From ACORN to (poison) oak; Incels vs. equality; Making the case against Cos 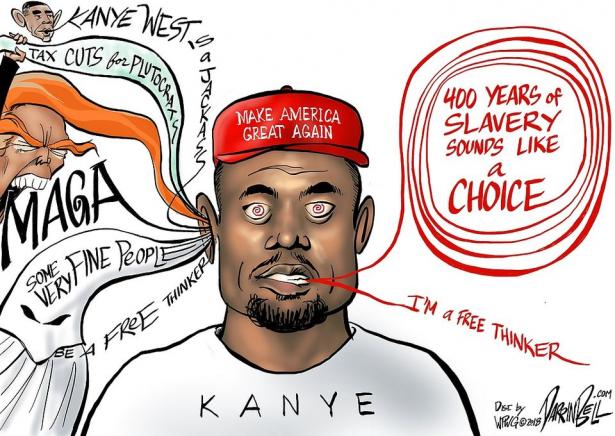 A noble tradition of American dissent has been hijacked by right-wing trolls—including the famous hip-hop artist.

Jordan Peterson is On a Crusade to Toughen Up Young Men. It’s Landed Him On Our Cultural Divide.

A couple of years ago, Peterson was a respected though far from famous academic when he began posting his lengthy lectures online. Now there are hours and hours of his talks and interviews on YouTube, a viral Encyclopedia Jordanica with more than a million subscribers.

By Steve Kolowich
April 27, 2018
The Chronicle of Higher Education

How a tiny protest at the U. of Nebraska turned into a proxy war for the future of campus politics.

Want to keep poor voters of color from casting a ballot? A federal appeals court has your back.

By Zach Carter and Arthur Delaney
May 5, 2018
HuffPost

Breitbart led the charge, but Democrats delivered the killing blow. Has anyone really learned?

What Do Incels, Fascists and Terrorists Have in Common? Violent Misogyny

Many accounts of incel subculture have treated it as a sharp deviation from the norm. It’s not.

Long before the Cosby trial, black women paved the way for our current robust national conversation about sexual violence.