books What She Saw at the (Political) Revolution

An eyewitness account of the 2016 Sanders presidential insurgency that weighs its electoral successes against its ability to form the core of social and economic movement resistance to capital. 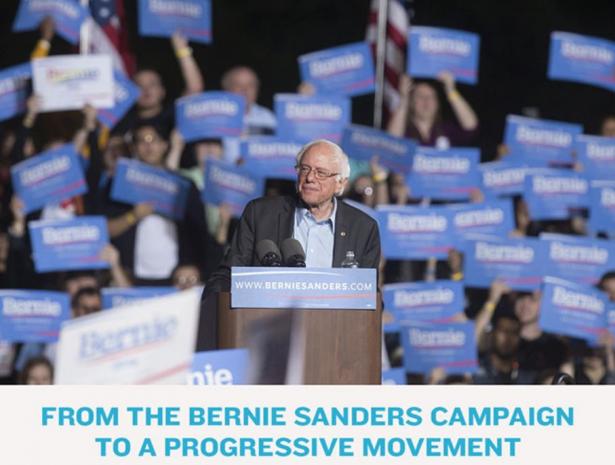 This memoir of sorts by Fordham University sociology professor Heather Gautney, who became a policy fellow in Bernie Sanders’ Washington DC office and a volunteer researcher and organizer for his unexpectedly popular 2016 presidential campaign, has a very specific focus: to “offer insights from up-close work with Bernie, mixed in with historical and sociological analysis, to perform an autopsy of the 2016 election” (2). Given the sheer number of insightless (to put it mildly) autopsies that have been proffered across the political spectrum—perhaps none more useless than Hillary Clinton’s own What Happened(Simon & Schuster, 2017)—Gautney’s book is more than welcome and even slightly overdue. 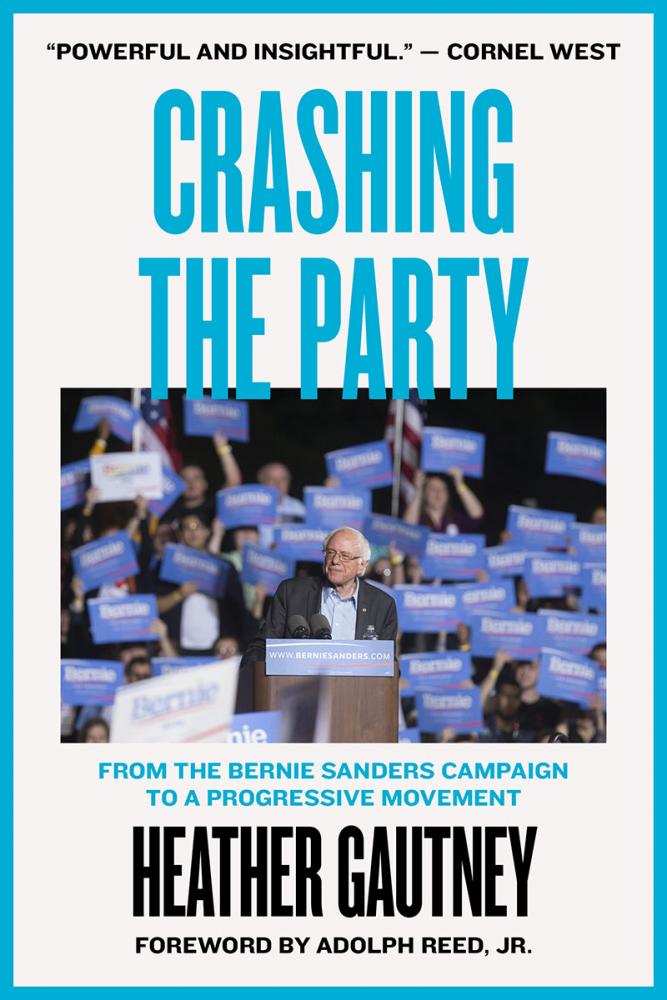 Crashing the Party: From the Bernie Sanders Campaign to a Progressive Movement

Both Gautney and socialist professor of politics Adolph Reed, Jr., author of the forward to Crashing the Party, make it very clear that electoral action and movement building operate via two distinctly different logics—even though Sanders sincerely wanted to use the former to build the latter and did it better than one might have expected. In Reed’s words, serious electoral campaigning “is all about mobilizing and connecting with existing constituencies … addressing people who understand themselves … as motivated around a given set of issues parsed and articulated in familiar ways. … [It] must have as its paramount concern aggregating the greatest number of votes possible” (xii). On the other hand, movement building “operates within a longer, less urgent, and more open-ended time horizon. … [It] assumes a need to generate a base of support or constituency for a political program, not that one already exists and needs only to be mobilized” (xiii). Gautney, understandably not very critical of Sanders overall, admits that even though “Bernie’s campaign engaged in a great deal of on-the-ground organizing, it may have missed an opportunity to engage in more systematic movement-building activities” (133). In any case, “meaningful change doesn’t happen over an election cycle” (134). To forget this is to abandon one’s radicalism, and Gautney clearly has not.

Some radicals, however, might take Gautney to task for using the terms “democratic socialist,” “social democratic,” and “left populist” essentially interchangeably when discussing Sanders and the program he promoted during the campaign. There’s little reason to get upset over this. Like it or not, Sanders still calls himself a democratic socialist even if his overt anti-capitalism from the 1970s and 1980s is gone; his use of the label helped Democratic Socialists of America recruit “Berniecrats” who were then introduced to a considerably more radical definition of “democratic socialism.” And Gautney admits that “Bernie did not associate himself with anti-capitalist politics or seek to nationalize major industries,” instead running on a robust social-democratic, welfare-statist platform “without the behemoth militarism and uneven ‘compromises’ between capital and labor” of the post-World War II era (15). Moreover, and more importantly, while “Bernie’s association with socialism may have meant something” to those already very politicized, Gautney rightly points out that “for the masses of people with less honed political identities, it was largely beside the point” and also did not hurt his ability to connect with those ever-more-exploited and disenfranchised masses (19).1

Amidst much valuable discussion of the crimes of New (or “establishment”) Democrats against the U.S. working class—starting back in 1978 with Jimmy Carter’s deregulation agenda—Gautney explains Sanders’ decision to run in the Democratic presidential primary:

Any Democrat or Republican who wins their party’s nomination is guaranteed a place on each state’s ballot for the general election, but in many states, third parties must petition election officials. There are significant barriers to obtaining ballot status, including sabotage from the two major parties. Bernie could have spent the entire campaign season mired in that struggle and may never have broken through the way he did. (35)

Perhaps ironically, even as much of the far left excoriated Sanders for “crossing the class line” because he ran as a Democrat, the Hillary Clinton fan club—especially on social media—consistently denounced him for not being a “real Democrat.” And the “real Democrats” in the Democratic National Committee did all they could to sabotage Sanders anyway, with the Clinton campaign controlling the DNC’s financial resources all through the primary (as revealed by ex-DNC vice chair Donna Brazile in 2017). This was to be expected. More irritatingly, only two Democratic members of the Congressional Progressive Caucus, founded by Sanders, openly endorsed him—undoubtedly fearful of the Wrath of Clinton when she “inevitably” became president. Some were vociferous in their support of Clinton, most notably Rep. John Lewis (D-CA), who also spoke for the vast majority of members of the Congressional Black Caucus (CBC) in their “there’s no such thing as a free lunch” ripostes to Sanders’ advocacy of single-payer health care and tuition-free public higher education. In Gautney’s memorable words, Lewis and others in the CBC “threw a bright spotlight on establishment Democrats’ practice of branding a conservative class politics as racial justice” (86). Truly, much of Crashing the Party illustrates the sheer slimyness of those who propogated bourgeois identity politics to bash Sanders—from Gloria Steinem to Joy Reid—as if to validate every word Adolph Reed has ever written on the subject.

Even more infuriating, of course, was the refusal of the vast majority of labor officials to even countenance the thought of endorsing Sanders. Here was the most clearly pro-labor presidential candidate to run a credible campaign in decades, and, moreover, he ran as a Democrat, not as a “spoiler third-party candidate who would throw the election to the Republican.” What more could organized labor want? But the vast majority of union tops went with the conventional wisdom: “Bernie can’t win.” As Larry Cohen, former Communications Workers of America president and senior advisor to the Sanders campaign wrote in New Labor Forum after the Trump victory (quoted by Gautney), “When they said Bernie can’t win, what they really meant was that working-class people can’t win” (45-6). It really isn’t much more complicated than that. Samuel Gompers’ old slogan “reward your friends and punish your enemies” has, by and large, degenerated into “pick a winner.” In this case, the “winner” didn’t even win.

Much of the rest of what Gautney covers is familiar to those who paid attention to Sanders’ campaign and its conclusion at the 2016 Democratic National Convention. She justifies the fight over the content of the party platform because the result “at least nominally set a baseline policy agenda that is far more progressive than what the party has committed itself to over the last several decades” (109). But she admits that the platform is unenforceable; she acknowledges that “the Clinton campaign instructed their staff ahead of time to ‘just give them what they want. No one will ever remember or care about what’s in the platform’” (104). I’d argue that the only thing valuable in the fight was the fight itself—the exposure before the world of just how hostile the dominant, “establishment” Democrats are to the left. (Cornel West’s demand that the party leadership acknowledge that “the Palestinians must be free” fell upon deaf ears for a reason.) Even more damning is the party leadership’s sheer thuggery, with Bernie delegates “threatened and harassed by security guards and DNC staffers, their signs confiscated or purposely obscured by American flags, and some of them kicked out entirely” (111).

So what now? Gautney is right to stress that building a mass constituency for left-wing policies requires grassroots organizing (to paraphrase a subheading of her book’s concluding chapter); indeed it does. Somewhat awkwardly, she also says that “if Democrats are genuinely interested in mitigating racial and gender disparities in the country, they will have to start considering these disparities in terms of the structural dynamics of the larger political economy. That means implicating the fundamentals of contemporary capitalism” (128). It’s not clear which Democrats she’s talking about—elected officials or merely people registered as Democrats? If it’s the former, plainly the establishment Democrats aren’t going to start implicating any capitalist fundamentals; they represent the ruling class and that’s that. Should a new version of the old “realignment” strategy be initiated? That’s essentially what Our Revolution (OR), the successor to the Sanders campaign, is about (though its support for Gayle McLaughlin’s independent run for Lt. Governor in California indicates that OR is at least not always hostile to left-wing non-Democratic Party electoral action). Gautney explains that OR “doesn’t want to crash the Democratic Party and foment chaos, it wants to rebuild it and expand its reach” (138).

It’s not exactly clear why this would be a good thing. Without a stance of absolute hostility to corporate-dependent Democrats, of what use is OR? If OR is going to act, primarily, as a “left opposition” of Democratic candidates, won’t that mean precisely “fomenting chaos,” including a refusal to endorse the ruling-class representatives who beat their candidates in primaries? Is OR planning to take over the DNC? The fate of Rep. Keith Ellison’s attempt to become DNC chair shows how unlikely success is in that arena. And even greater electoral success by OR members as Democrats won’t turn the party into a democratic, dues-paying membership organization, which is exactly what the working class needs—an actual party, not a state-run ballot line with fundraising arms.2 And does OR have any conception of breaking the two-party system by changing election laws when its candidates get elected? This goes undiscussed.

Regardless, Crashing the Party is a must-read. It provides the most razor-sharp analysis available of the 2016 Sanders presidential campaign, a campaign that proved that in fact it is possible to run for office as what Bhaskar Sunkara has called a “class-struggle social democrat,” on a platform that the Democratic Party establishment will always deride as “too left-wing,” and garner the support of millions. Our job now as socialists is to build upon the accomplishment of “democratic socialism” and “political revolution” entering mainstream political discourse and work toward a mass movement that will accomplish, yes, an actual political revolution that will lead to socialist democracy.

1. Trying to prove Bernie’s anti-imperialist bona fides is another matter. Gautney ably proves that Sanders is the most pro-Palestinian member of the Senate, but that’s a very low bar. It’s also true that more recently he’s led an effort to end U.S. support of the arguably genocidal Saudi war in Yemen. And he’s voted to repeal the 2001 Authorization for Use of Military Force Against Terrorists. But see Joanne Landy, “The Foreign Policies of Sanders, Trump, and Clinton,” New Politics (No. 61, Summer 2016).

2. For a better model, see Seth Ackerman, “A Blueprint for a New Party,” Jacobin (No. 23, Fall 2016). For an indication that OR seems to be having significant internal problems, see Sarah Jones, “Is It Time for Change at Our Revolution?” The New Republic. May 21, 2018.

Book author Heather Gautney was a policy fellow in Bernie Sanders’s Washington DC office and a volunteer researcher and organizer on his presidential campaign. She is an associate professor of sociology at Fordham University and the author of Protest and Organization in the Alternative Globalization Era. (2010).

[Essayist Jason Schulman is an editor of New Politics, an independent socialist review, and teaches political science at Lehman College (CUNY). He is the editor and lead contributor to Rosa Luxemburg: Her Life and Legacy (2013) and author of Neoliberal Labour Governments and the Union Response (2015).]