Her new bill would compel corporations to dump “maximizing shareholder value” and put worker representatives on their boards. 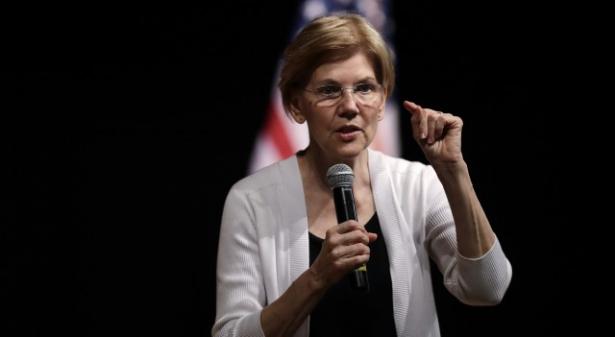 When Bernie Sanders offered up his definition of socialism in a speech at Georgetown University in 2015, he basically equated it with the governmental programs created by the New Deal. Sanders cited Social Security, and New Dealer Lyndon Johnson’s three-decades-later follow-up, Medicare, as the primary U.S. examples of publicly funded universal programs that provided older Americans with income and access to health care. That, said Sanders, was a tradition he sought to renew, by creating single-payer health care for all, free public university educations, and a host of other programs.

The historic ground on which Sanders took his stand was the experience of the United States when New Deal programs were most effectual. Before they’d been eroded by the financialization and globalization that commenced in the 1970s, FDR’s New Deal gave the nation its one and only period of broadly shared prosperity.

Share this article on
In the three decades following World War II—the three decades of unions enforcing worker power—median worker income rose in tandem with productivity, and CEOs made on average 20 times what their average employee made.

But it wasn’t just the programs FDR signed into law that did the trick. It was also one further bill that didn’t expand government’s capacities and responsibilities as such, but simply gave workers power: the National Labor Relations Act. By enabling workers to join unions without fear of dismissal, the NLRA facilitated the growth of unionization to the point that just over one-third of the nation’s workers were unionized and thereby wielded sufficient power to affect corporate behavior. In the three decades following World War II—the three decades of unions enforcing worker power—median worker income rose in tandem with productivity, and CEOs made on average 20 times what their average employee made.

That world has long since vanished into the mists of time and financialization. As I noted in my Tuesday email, profit margins (that is, the share of revenue going to profits) reached an all-time high in the last quarter, while wages, when factoring in the rise in the cost of living, actually declined.

Comes now Elizabeth Warren, like Sanders, seeking to re-create the New Deal’s creation of a vibrant middle class—but in this instance, not through an updated version of governmental social provision, as Sanders suggested, but through that other dimension of New Deal success: bolstering worker power. This week, Warren introduced a new bill, the Accountable Capitalism Act, which seeks nothing less than the compelled conversion of American corporations from their current creed of maximizing shareholder value to the friendlier confines of benefiting all corporate stakeholders.

To this end, she proposes two fundamental changes. The first is to end corporate chartering by the various states, replacing it through requiring corporations with more than $1 billion in yearly revenues to be federally chartered, and to have those charters redefine the corporations’ mission so that they benefit not just shareholders but their employees and communities as well. The second change she proposes is to require corporations to have 40 percent of their boards of directors elected not by their shareholders but by their employees. In this, she’s following the lead of her colleague Tammy Baldwin, who introduced a bill earlier this year that required corporations to set aside one-third of their board seats to employee representatives. And both senators are following the lead of the Germans, where a 50-50 split of board membership between owner and worker representatives has long been required by law.

As Warren noted in an op-ed she wrote for the Wall Street Journal yesterday, over the past 35 years the financialization of the American corporation has meant that shareholders now extract more funds from corporations than those businesses devote either to investment in their own enterprise or wage increases for their workers. (University of Massachusetts economist William Lazonick, the doyen of share-buyback scholars, documented these developments in a piece he wrote for the summer issue of the Prospect.)

Warren, then, is seeking to reinvent the “corporate conduct” side of the New Deal, much as Sanders wants to reinvent its social-rights dimension.

Warren, then, is seeking to reinvent the “corporate conduct” side of the New Deal, much as Sanders wants to reinvent its social-rights dimension.This is not to say either is opposed to the other’s endeavors: Warren, for instance, supports Sanders’s Medicare for All bill, among other similar proposals. Both also support the next iteration of labor law reform, which would renew the promise of the NLRA by restoring workers’ rights to associate and bargain.

As Vox’s Matt Yglesias has noted, Warren’s proposal is sure to rouse the tsunami-force ire of corporate executives and, not to put too fine a point on it, the greedy rich. But, like Baldwin before her, Warren has plainly calculated that if and when this becomes a battle for public support, it’s a fight she can win. Baldwin, after all, put her bill forth this year, despite facing a re-election campaign in a purple state. Some polling that Yglesias cites suggests there’s majority support for putting workers on corporate boards. My hunch is that even as many working-class Trump supporters voted against “right to work” in Missouri last week, many working-class Trump supporters in Baldwin’s Wisconsin, Warren’s Massachusetts, and all across the country would support giving workers more say over corporate decisions. Perhaps Warren’s new bill will prompt Pew and Gallup to poll on this issue. The results, I suspect, would stiffen Democrats’ spine when proposals like Warren’s come before them once they retake power.

As I’ve written frequently here at the Prospect and in my columns for The Washington Post, co-determination has been a major factor in Germany’s ability to maintain world leadership in manufacturing, preserve its middle class, and limit CEO pay—a whole raft of achievements that have eluded the financialized United States. In tandem with expanding social provision, curtailing Wall Street, restoring progressive taxation, and rebuilding worker power, it could just give this nation a new birth of equality and prosperity.

Harold Meyerson is the executive editor of The American Prospect. His email is hmeyerson@prospect.org. Read more articles by Harold Meyerson, follow him on Twitter or RSS.