labor Socialists Can Seize the Moment at Amazon

Amazon plays a key role in the twenty-first-century economy and has shown it’s vulnerable to pressure. Socialists should get jobs there and organize. 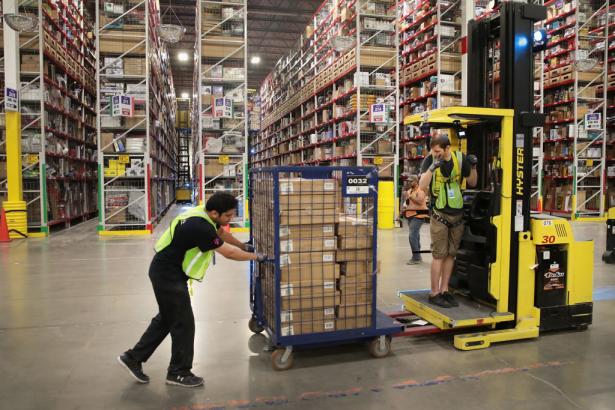 Raised up by resistance to the war in Vietnam and the battle for civil rights in the 1960s and 1970s, we were part of a generation of young Americans who realized that the industrial working class was the force capable of making major political change in the US. This was certainly a stretch for many of us who had grown up in the comfortable suburban middle class with little contact or experience with workers. However, our involvement in social movements exposed us to Marxist concepts of class analysis and the role of class conflict in historical change. The organization of workers is central to that theory and to our own history of social and economic progress.

For thousands of like-minded radicals like us, it was farewell to professional careers and off to the factory.

At that time in greater Boston, it was relatively easy to get a job at one of the three Generals: the giant Fore River Shipyard in Quincy owned by General Dynamics; General Motors in Framingham; and General Electric in Lynn. (Today only General Electric remains — a small shell of its former self.) All three of the Generals employed dozens of idealistic lefties committed to a broad vision of radical change.

There we learned the hard lessons of the challenges of building on-the-job unity and working-class organizing, plus lifelong lessons in humility and respect for the mind-numbing tedium of work and the joys and rewards of successful organizing. Forty years later that, was “once upon a time” when revolution was “in the air.”

Fortunately, Bernie Sanders’s candidacy and the resistance to Trump has inspired a new generation of organizers and activists. While much of the resistance has taken the form of street demonstrations and electoral political action, many of these new organizers are grappling with the same thorny questions of how to build working-class power to change the economy and the country.

Naturally, some of that activism focuses on the same macro forces that drive our economy. Young organizers are again looking at big industries and giant companies where a collective effort might affect significant change. While manufacturing and the strategic industries of the past are still important, we see the logistics supply chain as a place where an organized and invigorated working class could exercise power. And the inspiring teachers strikes in West Virginiaand elsewhere are harbingers of the kind of mass activity necessary to rock the system in the post-Janus, Trump years.

We urge young organizers inspired by Sanders, the pushback to Trump, and the teachers’ strike wave to look at targeting an employer that plays a strategic role in the economy, symbolizes the melding of technology and high-powered logistics, and has shown it is vulnerable to organized pressure. That company is Amazon.

Amazon in the Retail Vanguard

Amazon’s recent purchase of Whole Foods and its decision to site a second headquarters in another major city have further raised its profile in the business and popular media. While Barnes and Noble is closing its bookstores, Amazon is actually opening brick-and-mortar bookstores. The company currently has fourteen Amazon Books stores open nationwide with three more on the way.

Amazon is now piloting clerkless stores that could become a model for the future of retail. Customers will only need to swipe their credit cards at merchandise and walk out with their goods without interacting with a single human being. Amazon has already used delivery drivers with drones for making deliveries in select markets. Amazon has announced a patent for an employees’ bracelet enabling it to monitor employees’ work at all times.

Amazon’s advanced use of robots in warehouses is already displacing living, breathing human workers. And its management of professional and technical staff (“If you’re a good Amazonian, you become an Amabot.”) is setting new precedents for white-collar oppression.

Does Amazon’s disruption of existing distribution systems and retail-sales models add up to a company where workers can even dream of organizing to improve their wages and working conditions? One good sign is the company’s recent announcement that it would raise wages for employees to $15 an hour. The pay raise came about as a result of public pressure — led by Bernie Sanders— and a tight labor market going into its peak season. But at the same time it raised wages, Amazon cut other benefits and stock options.

Despite the negative aspects of Amazon’s recent announcement, unilateral actions like this are a shop-floor organizer’s dream. Suddenly, there is widespread and open discussion about wages and working conditions. In the hands of a politically conscious organizer, those conversations inevitably lead to a conversation about our collective power and unions.

Could a movement in this environment emerge to demand — and win — collective bargaining? Emphatically yes. And the stirrings at Amazon are worldwide: workers in Italy, Germany, Poland, and Spain are uniting for better conditions, while organizers in the US are looking at the giant online-distribution network as a strategic imperative for labor’s future. We believe that Amazon’s high public profile and just-in-time delivery model are factors that — if combined with a well-thought-out strategy — could empower workers to succeed.

Amazon is the third-largest retailer in the world (after Walmart and CVS) and is now the largest online retailer edging out Alibaba, the Chinese online distributor. Until very recently Amazon relied solely on online sales, but with its acquisition of Whole Foods, its business model is changing. Amazon operates worldwide with distribution/fulfillment centers in over 18 countries. There are 351,000 employees worldwide and 280,000 in the US alone.

Distribution centers operate in the twenty-five major metropolitan areas of the United States. Jeff Bezos, the founder of Amazon, is now the owner of the Washington Post with vast financial resources and an increasing role in national politics.

Union strategists and organizers have been both inspired and chastened by recent organizing drives at Walmart and the ongoing Fight for $15 campaign. While an organizing campaign at Amazon is a daunting prospect, the labor movement was built at key moments by thinking big and acting boldly.

For example, thousands of garment workers were organized in New York City in the “Rising of the Ten Thousand” in 1909. William Z. Foster’s strategic vision inspired organizers to plan and execute a brilliant strike at Big Steel in 1919. While unsuccessful, the lessons and experience from this effort inspired future organizers who would eventually crack the industry fifteen years later. And of course, the iconic sit-down strikes in the thirties were conducted by organizers who understood the vulnerabilities in the production chain of giant auto companies like General Motors.

Only twenty-one years ago, the International Brotherhood of Teamsters struck the premiere symbol of on-time deliveries: United Parcel Service. Once UPS’s inter-city “feeder” drivers stopped hauling between the company’s hubs and its package cars stopped deliveries, the strike’s impact was immediate.

Mere hours after the strike began, packages piled up and clogged the sorting belts at its distribution centers, paralyzing the workflow. The Teamsters’ success in framing the walkout as a battle against part-time and precarious work was a shining example of workers rising up to challenge one of the largest corporations in America.

Get a Job! Get Rooted!

Looking back on our years of organizing experience, we’d like to encourage young organizers to examine the potential for organizing and rebellion at Amazon.

All major organizing initiatives in modern US labor history have benefited from politically conscious cadres who went to work in industries targeted for organizing. This practice has many names: industrializing, colonizing, rooting, or the term we prefer, “salting.” It can be done for a lifetime or for short-term intelligence gathering and committee building.

Success in organizing workers at a corporate giant like Amazon will only come if organizers, strategically placed and coordinated, can agitate and motivate their coworkers from a position of comradeship in the workplace.

Building a workers’ movement within Amazon would reshape the national narrative about labor and unions. However, there won’t be any quick or easy victories. Success will be intermittent and slow. All the aforementioned examples — successes like UPS and instructive failures like the 1919 steel strike — required long-term approaches, dedicated cadres of organizers and strategic research.

Workers should approach organizing at Amazon with no less than a five- or ten-year plan. It is incumbent on the new generation of inspired organizers to get in on the ground floor, get jobs at Amazon, and be part of fashioning the strategy and tactics that can lead to the creation of a new worker organization.

Amazon facilities are everywhere and there are already salts working together in key metro areas. Being part of an organizing network and connecting your work to a larger international effort is an exciting project. While Amazon is in or near every major city, some key strategic locations include Chicago, Dallas/Houston, Los Angeles, the NY/NJ area, and Seattle.

If you are ready to commit to this kind of organizing, then email either of the authors (Peter Olney at olneyrom@gmail.com or Rand Wilson at rand.wilson@gmail.com) and we will help you to establish contacts and think through your placement at an Amazon facility.

While we have worked as union staffers for many years, it was our early experience as organizing salts and rank-and-file union members that inspired and informed our work as organizers for the duration of our careers. The rank-and-file experience teaches patience, humility, and respect.

Without knowing firsthand the drudgery of work, the humiliation of having to obey a supervisor’s commands, and the reality of the strengths and weaknesses of shop-floor organization, any organizer will be at a serious disadvantage. Should someone undertake salting at Amazon, you will not only be part of shaping a strategy and winning the union; the experience will teach you valuable lessons on what it means to be a working-class organizer. Just as importantly, it informs a lifetime of good strategic thinking and sensitivity to workers’ struggles, from the warehouse on up. So, get in touch, and let’s do it.

Rand Wilson is chief of staff and an organizer at SEIU Local 888 in Massachusetts.

Peter Olney is the retired organizing director of the International Longshore and Warehouse Union (ILWU) based in San Francisco.

The new issue of Jacobin is out now. Buy a copy, or a special discounted subscription today.