“The Department instead simply discarded prior factual findings related to climate change to support its course reversal,” the judge wrote. 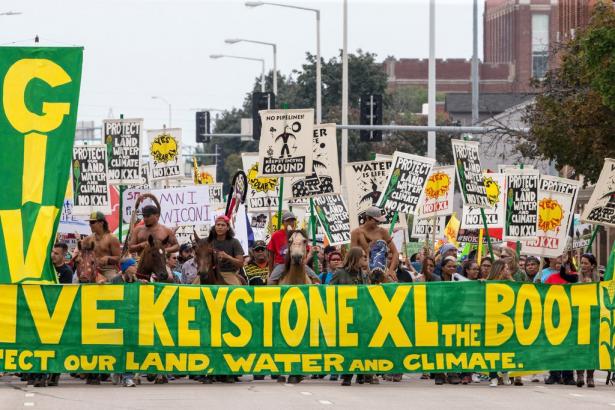 WASHINGTON — As the Trump administration has moved aggressively to roll back environmental protections and speed up oil and coal projects, it has repeatedly been blocked by courts finding that the administration did not follow longstanding rules in making its sweeping changes.

Now, a federal judge has issued a repudiation of one of President Trump’s first acts as president, his decision to allow the disputed Keystone XL oil pipeline to proceed, saying that the administration failed to present a “reasoned explanation” for the move and “simply discarded” the effect the project would have on climate change.

The decision could thrust the White House into a contentious new legal battle over climate change.

The judge’s finding quickly drew fire from Mr. Trump, who has elevated the pipeline as a prominent symbol of his administration’s effort to encourage fossil fuel use. “It was a political decision made by a judge,” said Mr. Trump on Friday, speaking to reporters at the White House. “I think it’s a disgrace.”

The ruling, by Judge Brian Morris of United States District Court for Montana, blocked construction on the 1,179-mile pipeline, which would carry 800,000 barrels a day of petroleum from the Canadian oil sands to the Gulf Coast and has, over the past decade, become a lighting rod in broader political battles over energy, the environment and climate change. While experts have long said that the substantive impact of the pipeline on jobs, climate change and the nation’s energy economy is small, it has nonetheless taken on an outsize prominence in the national discussion.

Judge Morris’ decision echoes a common theme in many judicial rejections of Trump administration policies, particularly on environmental issues. In short, the court said, the administration failed to follow established rules and procedures for decisions like these. Specifically, it failed to provide a fact-based analysis justifying its actions.

Judge Morris, an Obama appointee, didn’t respond to a request for comment on the president’s remarks.

“This has been typical of the Trump administration,” said Mark Squillace, an expert on environmental law at the University of Colorado Law School. “They haven’t done a good job dealing with the factual findings of the previous administration. The courts have been clear that you can change your position, even if it’s for a political reason. But you have to show your work, how you got from Point A to Point B.”

The decision leaves plenty of room for the Trump administration or TransCanada, the company building the pipeline, to appeal. Analysts said that if it did so armed with a deeply researched analysis arguing its position, it could well reverse the finding.

“It’s feasible, if they do the work, and show their work, and they explain, with serious, fact-based analysis, why they’re choosing a different outcome, that the courts would uphold it,” Mr. Squillace said.

When President Barack Obama rejected the Keystone permit in 2015, he was weeks away from negotiating an international global warming accord in Paris, and he sought to use the move as a symbol of his global leadership on climate change. He argued the pipeline would undercut United States leadership in curbing global reliance on fossil fuels.

Two days after Mr. Trump took office, though, he made Keystone a symbol of the post-Obama era of climate policy and energy, signing an executive order overturning Mr. Obama’s rejection of the pipeline. That move signaled that Mr. Trump would be moving forward with an aggressive effort to more substantively dismantle Mr. Obama’s climate change legacy — including withdrawing the United States from the Paris accord.

In saying that no work can go forward until the government more fully reviews the pipeline’s environmental impact, the ruling further stokes the political battles over climate change by a president who dismisses mainstream science and whose administration is also seeking to block a landmark lawsuit on behalf of children asking the government to stop the rise of planet-warming gases.

Construction on many portions of the pipeline has already been competed. At issue is the final phase, a leg that would run from Steele City, Neb., through Montana to Canada.

Still, environmental groups hailed the move as a victory in the battle over Keystone, which has spanned more than a decade. “Keystone XL would be a disaster for the climate and for the people and wildlife of this country,” Jackie Prange, senior attorney at the Natural Resources Defense Council, said in a statement Thursday.

The oil industry characterized the move as the latest turn of the screw in the long-running legal battle. “Pipelines like KXL are the backbone of our nation’s energy infrastructure and one of the most environmentally sound ways to transport the fuel and petroleum products that power America,” said Robin Rorick, vice president of midstream operations for the American Petroleum Industry, which lobbies for oil companies.

“The pipeline has passed every environmental review conducted for it. In fact, a total of six assessments by both the Obama and Trump administrations concluded that KXL is safe to build,” Mr. Rorick said. “Calls to conduct identical environmental reviews makes no sense and are a waste of tax dollars.”

TransCanada did not respond to a request for comment. Construction could have begun as early as next year.

Read the Judge’s Ruling on the Keystone Pipeline (PDF)

Judge Morris found that in reviving Keystone, the Trump administration did not adequately account for how a decline in oil prices might affect the pipeline’s viability. In addition, the government’s analysis did not fully study the potential for oil spills or the cumulative effects of greenhouse gas emissions from the Keystone pipeline in combination with a pipeline approved in 2009, the Alberta Clipper.

The ruling specifically takes the Trump administration to task for failing to address the Obama administration’s arguments about climate change, including the need to keep rising global temperatures at safe levels as a basis for denying the pipeline permit. Rather, the government declared it was embracing a policy shift toward “energy security, economic development and infrastructure.”

The judge said an administration had the right to reverse a previous policy, but still must back up its reason for doing so with facts. “The Department instead simply discarded prior factual findings related to climate change to support its course reversal,” the judge wrote.

He cited a United States Supreme Court ruling that noted, “An agency cannot simply disregard contrary or inconvenient factual determinations that it made in the past, any more than it can ignore inconvenient facts when it writes on a blank slate.”

Energy and policy analysts say that the pitched battle over Keystone is out of scale to the project’s actual significance as an environmental threat or an engine of the economy. The pipeline will have relatively little effect, they say, on climate change, oil production in the Canadian oil sands, gasoline prices or the overall job market in the United States.

“Keystone is not a very large issue in the context of energy or climate change policy for the U.S.,” said Robert Stavins, the head of the environmental economics department at Harvard University.

He noted that, by comparison, Mr. Trump’s moves to roll back Environmental Protection Agency rules on carbon dioxide pollution from tailpipes and power plants, and his decision to withdraw the United States from the Paris climate change accord, will have a profound impact on the emission of gases that warm the planet when they enter the atmosphere.

Construction of the pipeline would also be insignificant in terms of advancing Mr. Trump’s professed goal of achieving “energy dominance” for the United States, said Mr. Stavins, saying that its purpose is to help move oil produced in Canada to Gulf Coast ports where it can be exported to the global market.

An analysis published by the State Department during the Obama administration estimated that Keystone would support 42,000 temporary jobs for two years — about 3,900 of them in construction and the rest through indirect support, like food service — but only 35 permanent jobs. Similarly, the government concluded that the increase in carbon dioxide pollution associated with burning the oil transported through the pipeline would amount to less than 1 percent of the total greenhouse gas emissions in the United States.

Lisa Friedman reports on climate and environmental policy in Washington. A former editor at Climatewire, she has covered nine international climate talks. @LFFriedman

Coral Davenport covers energy and environmental policy, with a focus on climate change, from the Washington bureau. She joined The Times in 2013 and previously worked at Congressional Quarterly, Politico and National Journal. @CoralMDavenport • Facebook