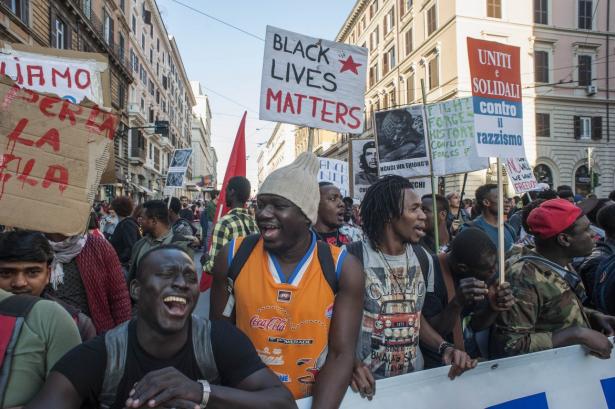 Protesters in Rome: “We are Nigerians, Malians, Ghanaians, and we’re organizing ourselves via the Internet.",photo: Il Manifesto Global

The activists, describe themselves as ardent communists who fervently believe in the ideals of Marx and Mao. Their campaign against inequality and corporate greed has gained traction at some of China’s top schools.

The Greens reached more than 10% in all regions of Bavaria and Hesse, and between 20 and 30% in the big cities.

Twenty-five countries have so far ratified ILO’s Convention 189, providing numerous labor rights and other protections to millions of domestic workers across the world, 82% of whom are women.

An extreme right-wing Democratic Football Lads Alliance (DFLA) march was out-mobilised and disrupted by anti-fascist demonstrators. One week later, a huge anti-Brexit demonstration was dominated politically by the right-wing, pro-EU trend in the Labour Party.

A massive rally in Santiago was part of a national strike called by Worker’s United Centre of Chile (CUT).  Several trade unions and student federations attended the march. Similar rallies were held in 40 other locations across the country.

Immigrants and supporters express opposition to Italy's government, call for the withdrawal of bill making it easier to expel migrants.