“Campesinos” are driving the evolution of maize in North America 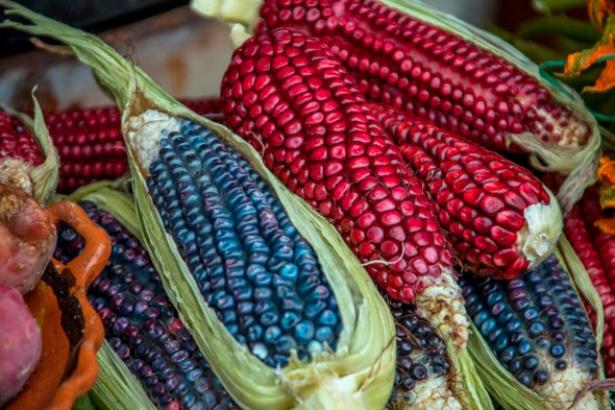 Like his parents and grandparents before them, Edilberto “Beto” García Cuenca started farming the land when he was just a kid. The descendant of a long lineage of “campesinos”—a Spanish term for family farmer—he still grows maize in the small, five-acre plot his mom left him in their hometown of Santa María Zacatepec in the Mexican state of Puebla. He also plants beans to keep the soil fertile and relies on rain to irrigate his crops.

During the rainy season, García Cuenca selects the seeds he stored the previous cycle, plants them and cares for the seedlings. Multiply that process by the millions of other campesinos in Mexico and you get billions of genetically different maize plants—each exposed to a wide diversity of environments and subjected to unique selection practices.

This evolutionary experiment has been going on for thousands of years. And the efforts of small-scale farmers, a recent study suggests, generate the bulk of corn’s genetic diversity in North America. In the face of more aggressive weather threats researchers say the finding comes at a critical time. “This takes things a step further,” says Daniel Piñero, a plant population geneticist at the National Autonomous University of Mexico. “Family farmers are not only preserving the [genetic] diversity of maize,” or corn, Piñero says—they are contributing more of it.

In the study Mauricio Bellon, a social scientist who works for Mexico’s National Commission for the Knowledge and Use of Biodiversity, and his colleagues used government numbers from the 2010 rainy season—the last year a national census was done. The team narrowed in on the municipalities with maize yields of up to three metric tons per hectare—in other words, where people still grow their own food and cultivate native varieties. The researchers then estimated the area where corn hybrids are produced at a commercial scale.

Commercial corn farmers in Mexico planted around 3.2 million acres during the rainy season; the rest—more than 11.5 million acres—was planted by campesinos, the researchers reported in August in Proceedings of the Royal Society B. Using previous estimates, Bellon’s colleagues were also able to calculate that in 2010 alone family farmers in Mexico grew approximately 138 billion genetically different maize plants. The domestication of native maize across a wide range of temperatures, altitudes and slopes has allowed rare mutations to take hold that would otherwise disappear, Bellon notes. “Campesinos are generating an evolutionary service that is essential for them, for the country and, given the global importance of maize, for the world,” he says.

Scientists say this type of farming, fueled by traditional practices such as saving or sharing seeds from one season to the next, has resulted in Mexico’s 59 native maize varieties: a cornucopia of husks and cobs of all sizes and colors, from deep purple to creamy-white to pink to glowing orange. This diversity is rarely seen in the U.S.—the world’s largest producer of corn. “You go to a farm in Iowa and there may be three million plants, but they’re all genetically identical,” says Jeffrey Ross-Ibarra, a plant geneticist who studies the evolutionary genomics of maize at the University of California, Davis, and did not participate in the research. Because American farmers buy their seeds instead of cultivating their own, “there’s no chance for evolution to do its thing,” he adds.

Gene banks, secure locations that store plant seeds for use in case of natural or man-made disasters, are not much better places to see evolution in action. Packing seeds in storage facilities such as the Svalbard Global Seed Vault, a fail-safe seed repository deep below the frozen Arctic soil in Norway, gives researchers a snapshot of what crops looked like at a certain point in time. But there is no guarantee the genetic diversity represented by the seeds in those samples will be relevant for the environments humans will encounter, say, 30 years from now. In the eyes of Bellon and his team, that makes campesino agriculture irreplaceable. Others agree: “If we want to be able to grow food for a growing population, we need an agricultural system that is flexible and can adapt to changing conditions,” says Ross-Ibarra. “And there are lots of great new technologies that can help. But we shouldn’t ignore this pretty impressive and amazing resource that’s been around for thousands of years.”

In 2004 García Cuenca decided to try his luck in the U.S. He wrapped a bunch of tortillas made with the same maize he had harvested and saved them for the trip. For eight years he worked at a dairy farm in Minnesota, where perfect fields of hybrid yellow corn met the horizon. They looked nothing like his mom’s small plot. Now back in Mexico, he refuses to use hybrid seeds to sow his land. They are too expensive, he says. And they need more water and attention than the native maize he has known for so long does.

“We’re used to our seeds,” he says. “And we’re not interested in changing them.”

Emiliano Rodríguez Mega: I'm a bilingual reporter covering research and science policy, including the stories of those who are affected by them and those who use them to manipulate us. Latin America has become my dearest beat.

My work has been published in Science, Nature, Scientific American, Undark, SciDev.Net, WWF, and some other places. I also have experience tinkering with Canon cameras to shoot video and take photos.

In 2018, I was the *first* Health & Science intern with the Associated Press. I’ve also been an editorial intern at Scientific American and Radio Ambulante, NPR’s only Spanish-language podcast.

I now live in New York City, where I'm about to complete a master’s degree in Science, Health & Environmental Reporting at NYU.