Two high-ranking police officials have dropped out of a planned training junket in Israel after campaigning from local human rights activists. 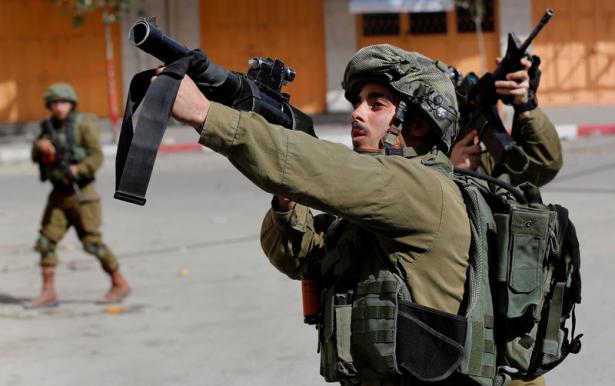 Activists say that US police forces should not be taking lessons from Israel’s occupying army. , Wisam Hashlamoun/APA images

Working from public records, activists learned that Jody Kasper, the police chief of Northampton, Massachusetts, had accepted an invitation from the Anti-Defamation League, a major Israel lobby group, to join a delegation this week.

Activists also identified Colonel Matthew Birmingham, the director of the Vermont State Police, as one of 15 high-ranking police officials on the junket to Israel.

After meeting with members of their communities, Kasper and Birmingham recently announced that they would pull out of the delegation.

“I am thrilled because it proves that it’s absolutely possible to end these exchanges – and people care across a broad spectrum of issues in our communities and are ready to jump into action,” Stefanie Fox, deputy director of Jewish Voice for Peace, told The Electronic Intifada.

About two years ago, Jewish Voice for Peace launched the Deadly Exchange campaign which seeks to end ties between US police forces and Israel’s military-industrial complex.

Activists have highlighted the harm those collaborations do to people fighting for their rights in Palestine and across the US.

This is the first time that any invitees of these trips have withdrawn, Jewish Voice for Peace says, a direct result of the campaign.

Israel lobby organizations have taken scores of officials from US police departments and federal agencies to Israel to learn “counterterrorism” techniques Israel has developed through decades of occupying Palestinians and systematically violating their rights.

But these exchanges are about more than just training; they also aim to build the US market for Israel’s multi-billion dollar weapons and “homeland security” industry, and bolster ideological support for Israel among US elites.

The ADL has boasted that since 2004 it has sent 200 “law enforcement executives” to be trained by Israeli forces in “intensive counterterrorism” tactics.

In correspondence between Northampton’s chief of police and the department’s sergeant, which was revealed as part of public records requests filed over the summer, the ADL promoted its trip as “an opportunity to learn prevention strategies and best practices to respond to incidents of terror and protect communities.”

All expenses, including flights, are covered by the ADL, according to the documents seen by The Electronic Intifada.

A leader of the ADL in Boston told a local newspaper that the trip had no political agenda and that the delegation would not meet members of the Israeli military.

However, despite these efforts to brand the junkets as apolitical, the lobby group’s own director of police training initiatives told The Jerusalem Post in 2015 that officers who participate “come back and they are Zionists” – supporters of Israel’s state ideology.

“They understand Israel and its security needs in ways a lot of audiences don’t,” added David C. Friedman.

Notably, Israel’s police forces, which operate as an arm of the state’s apartheid and occupation apparatus, habitually beat, brutalize and kill Palestinians, including those who are citizens of Israel, and Africans inside the state and in occupied East Jerusalem.

Previous itineraries show that US police officials have visited with numerous Israeli agencies, including the military, which enforce occupation, surveillance, movement control, detention and discrimination.

They have also included meetings with Israelis in occupied East Jerusalem and officers from the US-funded Palestinian Authority security forces, which work in close collaboration with Israeli occupation forces in the West Bank.

Due to dogged efforts by human rights activists to obtain public records relating to these junkets, Fox told The Electronic Intifada that the ADL has recently attempted to obscure information from public view.

Fox explained that in their correspondence with invitees, the ADL now includes text pleading with public information officers to keep records confidential, but police departments and their officers are publicly funded institutions and such correspondence – and the content of the trips themselves – should be transparent.

Indeed, the documents obtained by Jewish Voice for Peace include a letter from the ADL to the Northampton police smearing JVP because of the Deadly Exchange campaign and labeling it “a radical anti-Israel activist group.” That letter warns that activists are seeking information through freedom of information requests and urges Northampton officials to notify ADL attorneys before disclosing “the documents or information we’ve provided.”

The fact that the ADL claims to be a civil rights organization “while having an extremely right-wing agenda in regards to Israel – which brings them into alignment with police and [Immigrant and Customs Enforcement] and violent state agencies – has become uncomfortable to them and they don’t want to talk about it,” Fox said.

“Especially as they try to put forward a face of being an opposition to Trump, their own hypocrisy is something they’re always managing,” she added.

After learning that their chief of police had accepted the ADL’s invitation to the junket, a small group of Northampton civil rights and racial justice activists requested a meeting with David Narkewicz, the city’s mayor, to discuss how the trip would affect their communities.

Activists told the mayor that “the violence our communities are facing requires us to dig in deeply at home, and the last thing we need are high-ranking police taking lessons from an occupying army,” Fox said.

The mayor indicated that he would make a decision in late November.

“We told him that we appreciated that he was taking the decision so seriously, but that word had started to get out and we would give him space – but we told him we had been preparing a public campaign that we would launch” if the mayor stalled, Rachel Weber, an attorney and member of the local chapter of Jewish Voice for Peace, told The Electronic Intifada.

Meanwhile, activists sent dozens of emails to the mayor urging him to cancel the police chief’s trip.

The mayor announced shortly afterwards that he had spoken with the chief and that her trip was canceled.

“Chief Kasper and I have both come to the conclusion that it is in the best interests of our city that she not participate in the National Leadership Seminar in Israel and as such she will be notifying the ADL New England of her decision to withdraw from the upcoming program later today,” Narkewicz told the activists in a 27 November email.

“It really was a coordinated effort that relied on the very vibrant organizing community in Northampton,” Weber said.

Coalition-building made it possible for activists “to broaden the context and say, why right now, in this moment when immigrants feel so unsafe, it’s not a moment to send our local police to train with Israeli forces,” Weber added.

“Into the public eye”

In Vermont, campaigners sent letters and emails to the state police urging its chief, Colonel Matthew Birmingham, to cancel his trip. But personal contacts with other racial justice groups were key to building momentum, said Kathy Shapiro of Vermonters for Justice in Palestine and Jewish Voice for Peace.

“All groups fighting for racial and social justice in Vermont are small because of the scattered and sparse population,” she told The Electronic Intifada.

“But by showing up for groups like Migrant Justice, Black Lives Matter, Justice for All and communities of faith in their struggles, we are beginning to realize a broader base of support and the shared knowledge that we are all fighting the same battle against a militarized, imperialist, capitalist, racist system that threatens all of us – but none more than people of color and the poor.”

The US relationship with Israel and the oppression of Palestinians is “a key feature of this struggle,” she added. “We are trying hard to end racial profiling by police here, yet that is a key factor to policing by Israeli police and military, and is taught during these exchanges.”

In organizing with other groups, Wafic Faour of Vermonters for Justice in Palestine said that activists presented the issue of police exchanges as a local one.

“When we talked to ordinary people in our community about a police officer who we pay for, whose budget we vote on, how can we send them to Israel to train and then come back to Vermont – for what?” Faour told The Electronic Intifada.

Faour said that activists convinced the state police that it was unacceptable to send high-ranking officials “to train in a foreign country that has a history of abuse” when communities are holding police departments accountable for violence, mass incarceration and racial profiling.

“Our campaign was fast, focused and precise, and they pulled out,” Faour said.