How Measles Hacks the Body—and Harms its Victims for Years

If only there were some way to safely traverse life without fear of walking into one of those hyper-virulent nebulosities ... Oh wait. That’d be a vaccine that’s been shown to be safe and effective by health authorities. 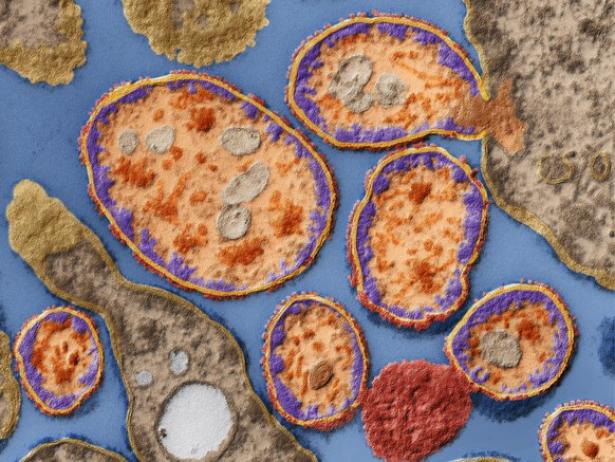 The measles virus is the most contagious in the world, exploiting the human body’s immune system to spread with extreme agility., Eye of Science/Science Source

IT’S 2019, AND all over the world measles is once again splotching across headlines. An ongoing outbreak in the Philippines has so far infected 4,300. In Ukraine more than 15,000 people have caught the disease since December, the country’s largest epidemic since the invention of vaccines. Madagascar is having its own worst outbreak in decades, with more than 500,000 cases since October, including 300 deaths.

The numbers in the US are smaller, for now, due to high vaccination rates nationwide. But in isolated pockets of the country where anti-vaxx sentiment is high, the disease has come surging back. The Centers for Disease Control and Prevention is currently tracking just over 100 cases across five outbreaks in Washington, New York, and Texas.

Among airborne respiratory pathogens, measles is an elite virus—the most contagious disease in the world. If you give this virus a lung, it’ll take a town. A cough from an infected person on a subway car would spread the disease to 90 out of 100 unprotected people. The virus stays alive, airborne outside the body of its human host, for up to two hours. For years scientists puzzled over how exactly measles achieves its contagion-in-chief status. But advances in microscopy and genetics have finally begun to illuminate what makes the virus so damn catchy.

“It’s really two things,” says Roberto Cattaneo, a molecular biologist at the Mayo Clinic who has been studying the measles virus for more than three decades. The first has to do with the kind of cells the virus infects first: alveolar macrophages. These immune cells patrol your airways, hoovering up and degrading bits of dust, pollen, and any other foreign objects that you breathe in. They also have a surface receptor the exact shape of a measles protein. “They’re supposed to be on a mission to destroy viruses, and instead they act as a shuttle, delivering measles straight to the closest lymph nodes.”

Once they’re in the lymph nodes, a sort of bustling immune system transit hub, the virus hops to its intended target—a subset of cells responsible for making antibodies to remember past pathogens. They form your immune system’s memory palace, the home base of future resistance. Measles hijacks those cells’ machinery and begins replicating and spreading at a breakneck pace. By Cattaneo’s estimates, one week after inhaling the virus, more than 50 percent of those cells have been infected. “It’s not subtle,” he says. “At that point you’re walking around with less than half of your immune system.” During this stage of the disease, while your body’s security forces are badly depleted, you become more vulnerable to other bacterial and viral infections.

This is why measles is most dangerous for individuals whose immune systems are already in a weakened state—cancer patients on chemotherapy, people who’ve recently had an organ transplant, elderly people, and infants. Their systems can’t bounce back.

It also explains one of the longer-lasting, more mysterious aftereffects of a measles infection. For years after the cough clears up and the rash disappears, children who’ve survived a bout with measles tend to come down with bacterial and viral infections more frequently. The virus essentially wipes out your catalog of prior infections so that the only foreigner your body recognizes is measles itself.

That pathogenic amnesia is bad, but it’s not what makes measles a standout spreader of disease. It’s what happens next. As waves of infected memory cells are swept out of the lymph nodes and back into circulation, they get trapped in the final few inches of your respiratory system—the tissues that line the upper trachea, otherwise known as your windpipe. These tissues have a special receptor that grabs ahold of any measles-toting memory cells. The virus then starts spreading laterally through the trachea, hopping to neighboring tissue through tight junctions between cells, enabling it to spread about 10 times faster than other types of respiratory pathogens.

As some of these cells succumb to the measles virus, they break apart and slough off into the airway, triggering the need to cough. “Measles basically uses the trachea as a trampoline,” says Cattaneo. “The cough bounces it out.” Because the trachea is the last stop before your mouth and the outside world, this exit strategy is vastly more efficient than that of other respiratory viruses, like influenza, which replicate deep in the lungs. For those infections, any viral particles expelled at the speed of a cough have to sneak past a maze of mucous membranes in the linings of the lungs, which can catch or at least slow down their escape. But with measles, the majority of the crippled cells along with their viral invaders escape easily to the outside world, producing an infectious cloud that can stay suspended for up to two hours.

If only there were some way to safely traverse life without fear of walking into one of those hyper-virulent nebulosities ... Oh wait. That’d be a vaccine that’s been shown to be safe and effective by health authorities, and recommended for all (non-immunocompromised) individuals over the age of one.

But with the threat of measles looming with more menace today than it has for decades, at least some vaccine-hesitant parents are taking the hint. In Washington’s Clark County, which has tallied 54 cases since January 1, demand for two types of measles vaccines shot up more than 500 percent, compared with the same time period in 2018. You might even say, the concern is catching.

Megan Molteni: I’m a staff writer at WIRED where I cover biology, health, technology and the environment.

I’m especially drawn to stories that reflect the complexity of ecological systems and the surprising places where innovations are born.

In a past life, I worked as a field research assistant sifting stream sediments, tracking sea turtles, and counting the occasional coral. Then I traded doing science for covering it, with the help of the Graduate School of Journalism at UC Berkeley, and my thesis advisor Michael Pollan.

I’m a triune citizen of Minnesota, Montana, and California.