Compared to other women in the United States, black women have always had the highest levels of labor market participation regardless of age, marital status, or presence of children at home. 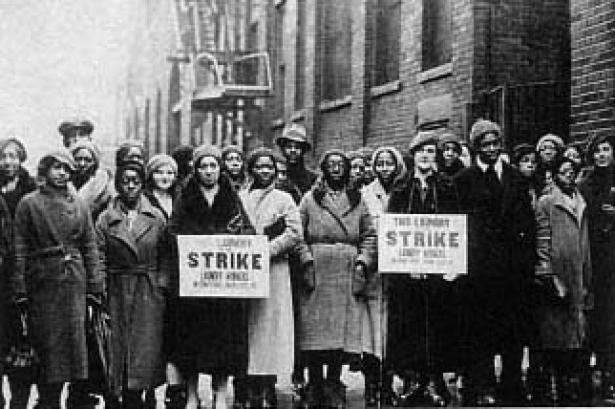 The black woman’s experience in America provides arguably the most overwhelming evidence of the persistent and ongoing drag from gender and race discrimination on the economic fate of workers and families.

Black women’s labor market position is the result of employer practices and government policies that disadvantaged black women relative to white women and men. Negative representations of black womanhood have reinforced these discriminatory practices and policies. Since the era of slavery, the dominant view of black women has been that they should be workers, a view that contributed to their devaluation as mothers with caregiving needs at home. African-American women’s unique labor market history and current occupational status reflects these beliefs and practices.

Differences in black and white women’s labor participation were due not only to the societal expectation of black women’s gainful employment but also to labor market discrimination against black men which resulted in lower wages and less stable employment compared to white men. Consequently, married black women have a long history of being financial contributors—even co-breadwinners—to two-parent households because of black men’s precarious labor market position.

Black women’s main jobs historically have been in low-wage agriculture and domestic service.1 Even after migration to the north during the 20th century, most employers would only hire black women in domestic service work.2Revealingly, although whites have devalued black women as mothers to their own children, black women have been the most likely of all women to be employed in the low-wage women’s jobs that involve cooking, cleaning, and caregiving even though this work is associated with mothering more broadly.

Until the 1970s, employers’ exclusion of black women from better paying, higher status jobs with mobility meant that they had little choice but to perform private domestic service work for white families. The 1970s was also the era when large numbers of married white women began to enter into the labor force and this led to a marketization of services previously performed within the household, including care and food services. Black women continue to be overrepresented in service jobs. Nearly a third (28 percent) of black women are employed in service jobs compared to just one-fifth of white women.

Discriminatory public policies have reinforced the view of black women as workers rather than as mothers and contributed to black women’s economic precarity. This has been most evident with protective welfare policies that enabled poor lone white mothers to stay at home and provide care for their children since the early 20th century. These policies were first implemented at the state level with Mother’s Pensions and then at the national level with the passage of the Social Security Act of 1935. Up until the 1960s, caseworkers excluded most poor black women from receiving cash assistance because they expected black women to be employed moms and not stay at home moms like white women.3

This exclusion meant that for most of the history of welfare, the state actively undermined the well-being of black families by ensuring that black women would be in the labor force as low-wage caregivers for white families. This helped to secure the well-being of white families and alleviated white women of having to do this work. The state simultaneously undermined the well-being of black families by denying black mothers the cash assistance that they needed to support their children and leaving black women with no other option but to work for very low wages. Indeed, the backlash against poor black moms receiving cash assistance eventually culminated in the dismantling of the AFDC program and the enactment of TANF—a program with strict work requirements.4

Because of discriminatory employer and government policies against black men and women, black mothers with school age children have always been more likely to be in the labor force compared to other moms. Today, 78 percent of black moms with children are employed compared to an average of just 66 percent of white, Asian American, and Latinx moms.5

Although black women have a longer history of sustained employment compared to other women, in 2017, the median annual earnings for full-time year round black women workers was just over $36,000—an amount 21 percent lower than that of white women, reflecting black women’s disproportionate employment in low-wage service and minimum and sub-minimum wage jobs. Black families, however, are more reliant on women’s incomes than other families are since 80 percent of black mothers are breadwinners in their families.

Despite black women’s importance as breadwinners, the state has compounded the lack of protections afforded black mothers by failing to protect black women as workers.6 In fact, state policies have often left black women vulnerable to workplace exploitation by excluding them from various worker protections. New Deal minimum wage, overtime pay, and collective bargaining legislation excluded the main sectors where black women worked–domestic service and farming. Although there have been inclusions since then, these sectors still lack full access to worker protections.

All workers—especially the most vulnerable–need workplace protections, including minimum wages that are livable wages. Universally available family-friendly workplace policies would be especially beneficial to women given their care responsibilities: paid sick and parental leave, subsidized child and elder care, and flexible work options.

This analysis is based on the author’s working paper, “Black Women on the Verge: Missing Black Men and Its Impact on Black Women”

Nina Banks is associate professor of economics and an affiliated faculty member in the Department of Women’s & Gender Studies and in Africana Studies, a program that she co-developed with Carmen Gillespie. Her publications focus on social reproduction and migrant households, black women and work, and the economics of the first black economist in the United States—Sadie Tanner Mossell Alexander.

The Economic Policy Institute (EPI) is a nonprofit, nonpartisan think tank created in 1986 to include the needs of low- and middle-income workers in economic policy discussions. EPI believes every working person deserves a good job with fair pay, affordable health care, and retirement security. To achieve this goal, EPI conducts research and analysis on the economic status of working America. EPI proposes public policies that protect and improve the economic conditions of low- and middle-income workers and assesses policies with respect to how they affect those workers.

Join with EPI to build an economy that works for everyone

We need your help in order to continue our work on behalf of hard-working Americans. Our donors value our high-quality research, reputation for truth-telling, and practical policy solutions. Your tax-deductible gift to EPI makes you an important partner in providing this critical public service.