Elizabeth Warren Is The Intellectual Powerhouse of the Democratic Party

Since her initial announcement in December, Warren’s campaign has rolled out a series of detailed policy proposals in quick succession, outlining structural changes to major industries, government functions, and regulatory procedures... 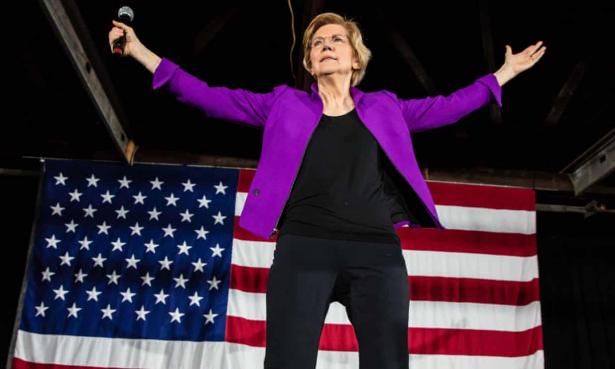 Elizabeth Warren, since announcing her presidential intentions in December, has rolled out a series of detailed policy proposals., Photograph: Rex/Shutterstock // The Guardian

still nearly a year to go before the Iowa caucuses, the first contest of the Democratic presidential primary, but the media has already counted Senator Elizabeth Warren out. The conventional wisdom has rapidly devolved from declaring her a frontrunner when she announced her bid on New Year’s Eve to confident assertions that her campaign is dead in the water, out-raised and out-charmed by the white male candidates – Bernie, Biden, Beto and Buttigieg – whose presidential bids have dominated the first months of the contest.

There’s some evidence to back this up: Warren is receiving less cable news coverage than some of the other major contenders, notably Beto O’Rourke and Kamala Harris, and a recent poll in her home state of Massachusetts found her in third place as a presidential contender even among her own constituents; she was beaten by the better-known early frontrunners Joe Biden and Bernie Sanders. She raised a robust $6m in the first quarter of 2019, outperforming the dire predictions of horserace cynics, but she suffered the embarrassment of coming up short to the inexperienced and baby-faced young Indiana mayor Pete Buttigieg, who raised $7m.

But since her initial announcement in December, Warren’s campaign has rolled out a series of detailed policy proposals in quick succession, outlining structural changes to major industries, government functions, and regulatory procedures that would facilitate more equitable representation in the federal government and overhaul the economy in favor of the working class. These policy proposals have made Warren the Democratic party’s new intellectual center of gravity, a formidable influence who is steadily pushing the presidential primary field to the left and forcing all of her primary challengers to define their political positions against hers.

Warren herself is an anti-trust nerd, having come to the Senate from a career as an academic studying corporate and banking law. On the stump, she’s most detailed in the same areas where she is most passionate, like when she talks about about breaking up huge tech companies such as Amazon and Google, and implementing a 21st-century–version of the Glass-Steagall act that would separate commercial and investment banking (she has also called for prosecuting and jailing bank executives who break the law). But her policy agenda is broader than that, taking on pocketbook issues that have resonance with working families.

Warren outlined a huge overhaul of the childcare system that would revolutionize the quality, cost and curriculum of early childhood education, with subsidies for families and a living wage for caregivers. It’s a proposal that she talks about in the context of her own career when, as a young mother and fledgling legal mind, she almost had to give up a job as a law professor because childcare for her young son was too expensive.

Warren has also proposed a housing plan that would limit huge investors’ abilities to buy up homes, give incentives for localities to adopt renters’ protections, and build new public housing. Crucially, and uniquely, her housing plan would also provide home ownership grants to buyers in minority communities that have historically been “redlined”, a term for the racist federal housing policies that denied federally backed mortgages to black families. The provision, aimed to help black and brown families buy their first homes, is a crucial step toward amending the racial wealth gap, and it has helped sparked a broader conversation within the party about the need to pay reparations to the descendants of slaves – a concept that Warren has also endorsed.

Taking her cues from pro-democracy and voting rights advocates such as Stacey Abrams, Warren has also taken on anti-majoritarian constitutional provisions, aiming to make American democracy more representative and less structurally hostile to a progressive agenda. She has called for abolishing the electoral college, the unfair institution the US uses to elect chief executives that makes a vote in New York count less than a vote in Wyoming, and which has resulted in two disastrous Republican presidencies in the past two decades. She has advocated eliminating the filibuster, an archaic procedural quirk of the Senate that would keep the Democrats from ever passing their agenda if they were to regain control of that body. And she has signaled a willingness to pack the courts, another move that will be necessary to implement leftist policies such as Medicare for All – because even if the next Democratic president can pass her agenda through Congress, she will not be able to protect it from the malfeasance of a federal bench filled with conservative Trump appointees eager to strike it down.

When other candidates campaign, Warren's strong policy positions force them to define themselves against her

Warren has been the first to propose all of these policies, and it is not difficult to see other candidates falling in line behind her, issuing belated and imitative policy proposals, or being forced to position themselves to her right. Warren has promised not to go negative against other Democrats, but her campaign’s intellectual project also serves a political purpose: when other candidates campaign, her strong policy positions force them to define themselves against her.

After Warren announced her childcare overhaul, Kamala Harris rolled out a plan similarly designed to combat gendered economic injustice, calling for guaranteed family leave and better teacher pay, respectively. After Warren rolled out her pro-democracy agenda of eliminating the electoral college, abolishing the filibuster and packing the courts, her ideological rival Bernie Sanders was forced to come out against both eliminating the filibuster and packing the courts, damaging his reputation with a party base who knew that without these interventions, a progressive agenda will probably never be enacted. The pressure eventually forced Sanders to cave to Warren’s vision and concede that he would be open to eliminating the filibuster in order to pass Medicare for All.

There’s still a long time before the first contests, and it’s possible that Warren will succumb to the flaws that her critics see in her campaign. In particular, she might not be able to raise enough money. She’s decided not to take any Pac money and not to fundraise with wealthy donors, a position that may be as much practical as it is principled: the super-rich are not likely to donate to Warren anyway, since she has such a detailed plan, called the Ultra Millionaire Tax, to redistribute their money. She may fall victim to the seemingly unshakable controversy over her old claims of Native American ancestry, and she seems doomed to be smeared and underestimated for her sex, called cold and unlikable for her intellect and then, as with other female candidates, derided as pandering when she tries to seem more relatable.

But it would be a mistake to write Warren off as a virtuous also-ran, the kind of candidate whose intellectual and moral commitments doom her in a race dominated by the deep divisions in the electorate and the craven demagoguery of the incumbent. Elizabeth Warren does not seem to be running for president to make a point, or to position herself for a different job. Instead, she is making bold interventions in the political imagination of the party. It may well not be Warren who wins the Democratic nomination, but whoever does will be campaigning on her ideas.

[Moira Donegan is a Guardian US columnist.]

… we have a small favour to ask. More people around the world are reading The Guardian’s independent, investigative journalism than ever before. We’ve now been funded by over one million readers. And unlike many news organisations, we have chosen an approach that allows us to keep our journalism open to all. We believe that each one of us deserves access to accurate information with integrity at its heart.

The Guardian is editorially independent, meaning we set our own agenda. Our journalism is free from commercial bias and not influenced by billionaire owners, politicians or shareholders. No one edits our editor. No one steers our opinion. This is important as it enables us to give a voice to those less heard, challenge the powerful and hold them to account. It’s what makes us different to so many others in the media, at a time when factual, honest reporting is crucial. Your support is critical for the future of Guardian journalism.

Every contribution we receive from readers like you, big or small, goes directly into funding our journalism. This support enables us to keep working as we do – but we must maintain and build on it for every year to come. Support The Guardian from as little as $1 – and it only takes a minute. Thank you.